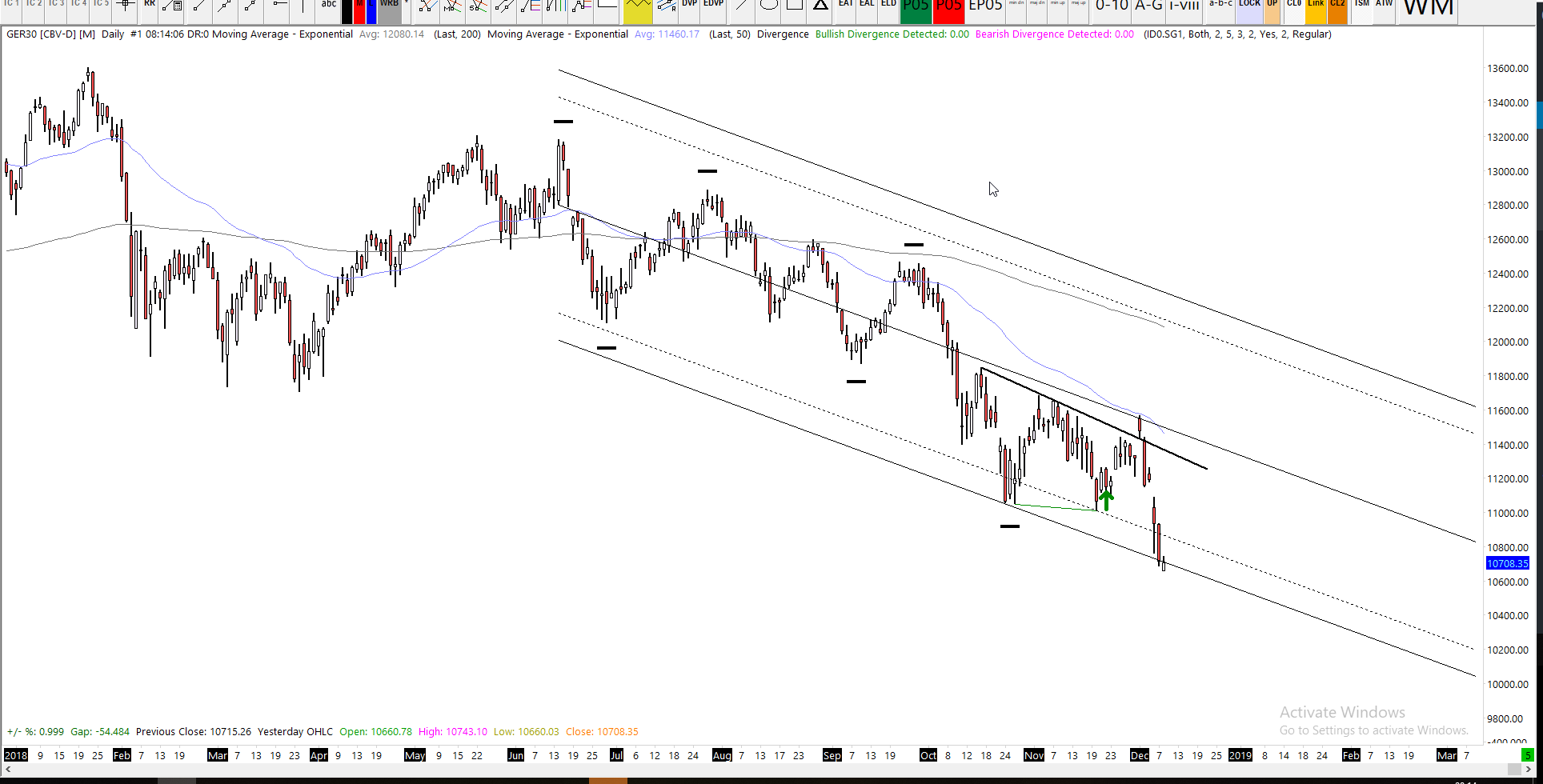 Why Is The DAX so Bearish Right Now?

There are a number of issues in play right now. Brexit, US/China, Italy are creating the biggest concerns and the concerns are not getting smaller, plus we have ECB in view this week. Stock marketers expect that the Dax will have a hard time in the penultimate trading week before Christmas. But why?

The arrest of the chief financial officer of the Chinese electronics group Huawei has massively unsettled the markets and the new confrontation has the potential to burden the upcoming trade talks. According to insiders, the arrest of the manager Meng Wanzhou in connection with US investigations, because there is a suspicion that Huawei had done business with the help of the British bank HSBC , which violated Iran sanctions. Chinese state media fiercely fought against this countering by stating that it was unquestionably true and proven that the US was trying its best to curb Huawei’s expansion in the world.

On Tuesday, the UK Parliament is to vote on the draft treaty negotiating for Britain’s exit from the EU negotiated by Prime Minister Theresa May. Experts believe that rejection is likely, since the agreements reached are largely in line with the EU’s ideas. After that, there should be just as little clarity as to how the future relationship of the United Kingdom to the EU will look like. The vote could also provide clues as to whether May will stay in office.

If the draft goes through, May could once again negotiate with the EU and make minor changes, the analysts of the financial house Marcard, Stein & Co stated. “Based on this reformed draft, there could be a second parliamentary vote in mid-January.”

The Italian budget dispute with the European Commission also continues to trouble investors. According to government circles, the populist coalition in Rome will present a revised draft budget on Wednesday in Brussels – one day before the EU summit – in order to avoid an excessive deficit procedure.

The right-wing government and populist five-star movement has been on a confrontational course with the EU Commission with its draft budget. The Brussels authorities are pushing for a reduction in new debt. However, the government still does not want to deviate from the expected shortfall of 2.4 percent of the gross domestic product. Italy is already extremely heavily in debt, which has sparked fears of a new euro crisis on the stock markets.

Draghi and the ECB

On Thursday, the head of the European Central Bank (ECB), Mario Draghi, will be the focus. Central bankers should finally decide that the billion-dollar asset purchase program will be discontinued. In addition, the focus will be on guidelines for the reinvestment of matured bonds and the economic forecasts of ECB economists. Insiders say the debate on the best way out of ultra-loose monetary policy is starting to pick up. In the discussion is among other things a condition of new long-term credits and a staggered sequence of future interest rate increases, said several persons from the environment of the monetary guardians.

Using my intraday strategy, last week I took 18 trades and gained +5.1% to the account.

Find out more about the strategy here:

Below you can see the price action for the last trading week (Monday through Friday) and on the right hand side you can see the voluje profile. This is important as it shows the high volume areas where price found ‘value’. These value areas will likely provide the upcoming levels of support and resistance.

The most obvious area to watch is around the 10870 zone, as this was the highest volume area from last week. It is the point of control and whilst nothing is guaranteed in trading, these point of control levels are often revisited. 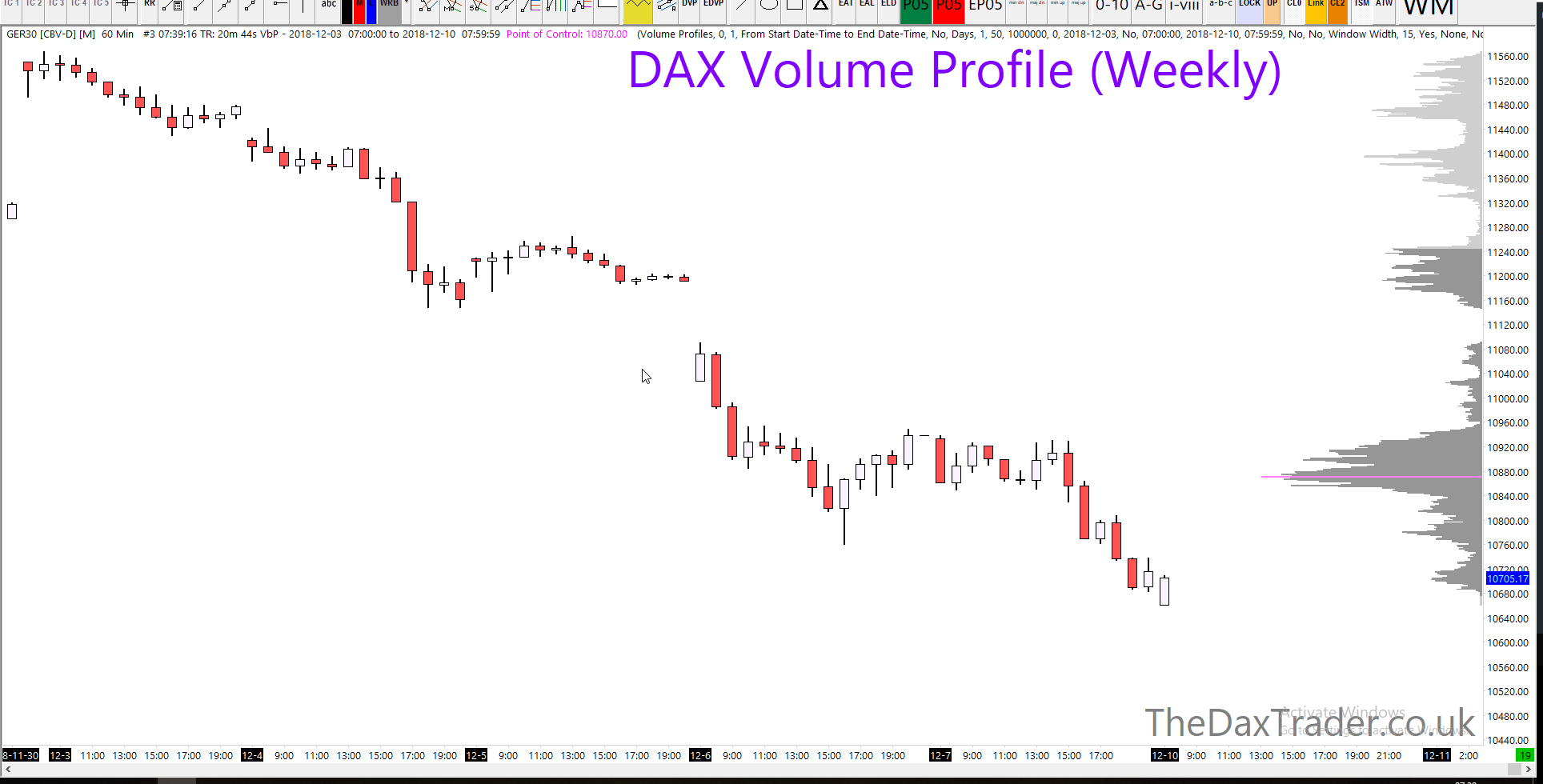 Friday saw the majority of price action trading between 10782 and 10929, this was the value area. Today, assuming that there is a minor corrective bounce, could see us testing 10,782 from the underside. This level is Friday’s value area low. If we break through that with strength, then perhaps a retracement to Friday’s Point of Control of 10899 is possible, but it’s unlikely given the speed of the market’s bearish decline. 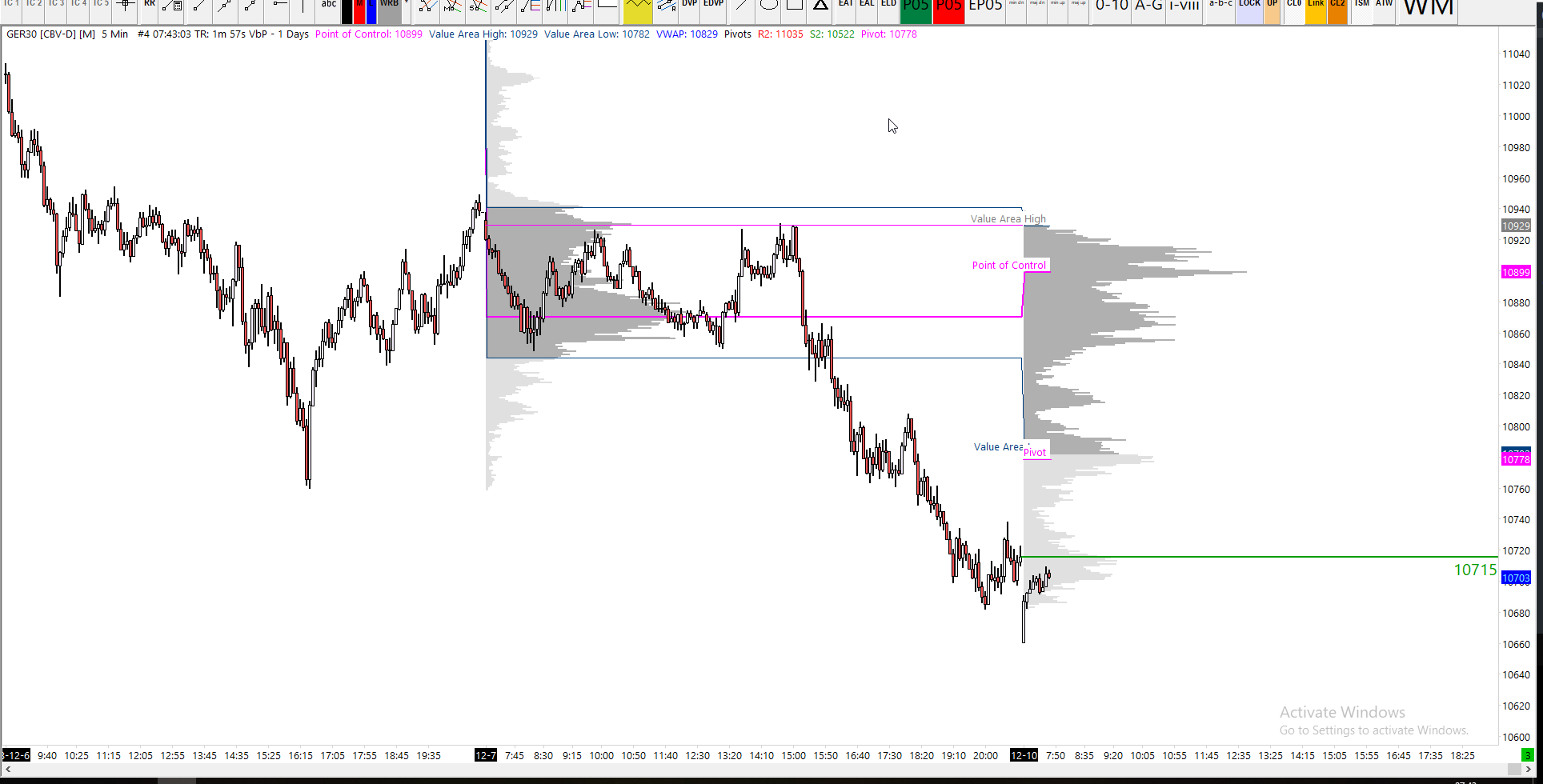 I’d like to see a bounce because of the extended price action from Friday afternoon.

Below is a screenshot of my VWAP scanner. Notice the orange candles? These orange candles are showing that we are over 6 times ATR below VWAP. Under these conditions, we would normally see a retracement back towards VWAP.

If you want a copy of this VWAP scanner and much more, then come and join us. Find out more here: https://thedaxtrader.co.uk/daxtrader-membership/ 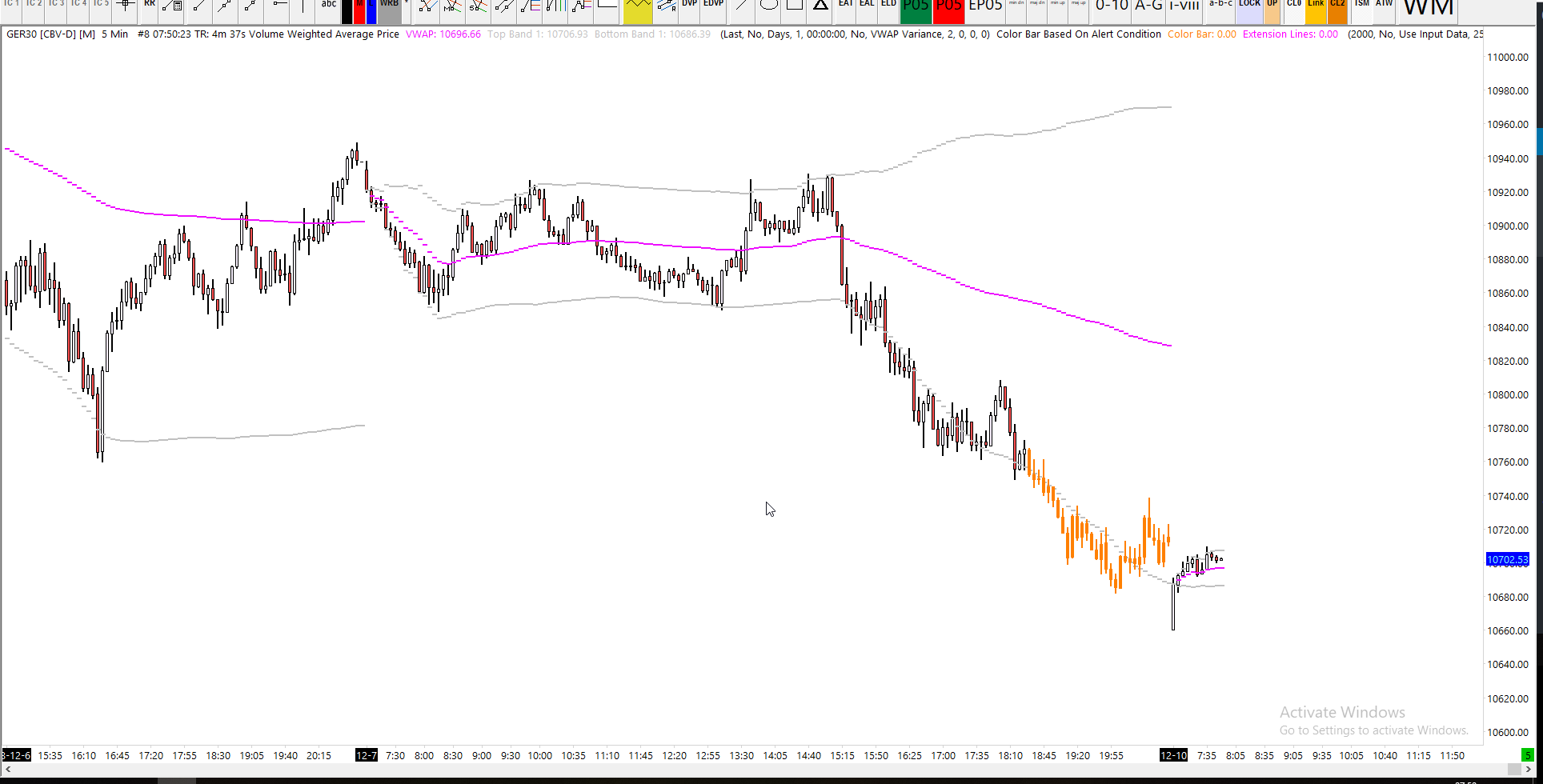