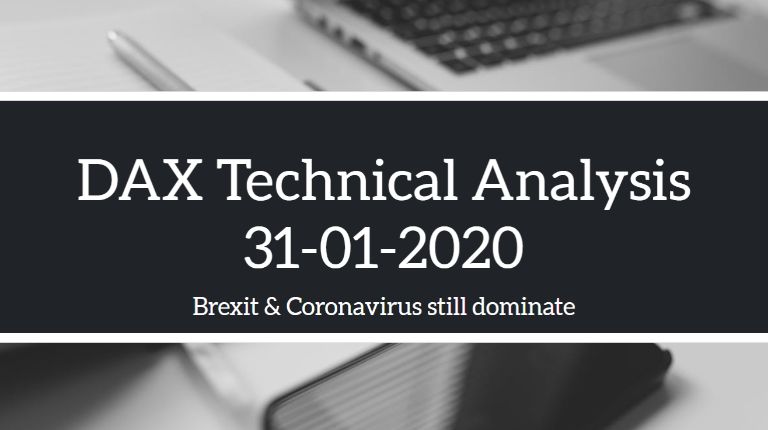 The DAX would normally be expected to recover today, after hitting one of the lowest prices for the last three weeks. That’s because it’s the end of the month and there will probably be plenty of short-covering to confirm P&Ls.

However, there are still a lot of fears surrounding the coronavirus. This global health emergency is still creating panic around the markets with many countries, such as Germany, looking at the wider impact on its own manufacturing industry. Don’t forget that the car industry earns a lot of money in China.

We also have Brexit confirmed tonight. It makes no difference now, but I voted to remain originally, so let’s just say I’m not really going to be celebrating. There’s nothing that can be done about it now, so it will be a moment of slight sadness for me. Maybe the market reacts on Monday, but let’s be honest, the work really only starts to begin now, as the trade deals are negotiated.

Since breaking below the upsloping low to low trendline, we have seen a series of lower lows and lower highs. The most recent confirmed lower high was 13 259. This high was broken yesterday. So now we watch 13 109 to see whether this low holds. If it does, then breaking above the recent high of 13 269 will signal the start of a new bullish trend. If you want to use our DAX strategy, then visit that link and take a look.

Bayer were given a boost after the US environmental agency continues to believe that their controversial herbicide (glyphosate) is not a carcinogen. They have over 40,000 plaintiffs in the United States, god bless the blood-sucking US legal system.