Consolidated in the afternoon after an initial surge forward. We tested Friday’s VPOC but didn’t breach it, bounced to make new highs and stayed in the 2nd half of the distribution for the rest of the day. Carved out a low volume pocket, chipped away at it, but it still holds. VWAP has caught up and is acting as a support area and now it’s dying.

I would like to see a retest of the previous pitchfork setup, which could act as a 50 fib zone from recent upswing, around the 9500 level which was a previous area of support. So I would like a correction to present itself. I don’t like shorting in bull markets, but I may be tempted temporarily.

I am definitely interested in buying from lower levels, unless we see another geo-politcal crisis. 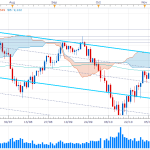 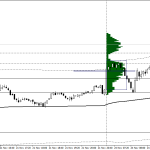 Lots of fundamentals out there to support further Dax strength. Friday’s surprise China rate cut is still being digested and speculators are keen to see a boost to trade. USDJPY reaches a five year high, SPX going vertical, inflation concerns in the Eurozone causing Draghi to take a stand and place the war chest on the table to show everyone what he’s prepared to do to. Equity fundamentals are still strong for the majority of the components and oil price is still a factor. Has anyone mentioned santa rally?

The pitchfork from January is now about to keel over. I had predicted 9750 by the end of the year,expectations are now being exceeded for me, I could now move the prediction to 10,000 but I would like to see a break of 9850 and another new high for the day today first.