Stocks in Europe were in in the green on Friday after the decision by the European Central Bank to cut the deposit rate by 10 basis points and reintroduce quantitative easing of €20 billion per month from November. The institution’s president Mario Draghi explained the decision was a response to the shortfall in inflation and persistent downside risks. The ECB left rates on the main refinancing operations and the marginal lending facility unchanged. It was widely anticipated that the governing council was likely to cut interest rates further into negative territory and strengthen its forward guidance. The question was whether they will opt for a 20bp point cut, taking the main deposit rate to -0.6 per cent – or the more modest 10bp move, which is what they chose. This could all be accompanied by a new tiering system – exempting a portion of banks’ excess deposits from negative rates – to lessen the hit to banks. More contentious is the decision on whether to relaunch QE. A hawkish minority on the governing council has made its opposition clear – but having raised investors’ expectations of a big package, the ECB could see a big market backlash if it fails to follow through. To make a big round of QE credible, though, the ECB may also need to increase the “issuer limit” – the one third cap on the proportion of outstanding bonds of any single member state it can buy.

I am expecting for the DAX 30 price to reach 12,500. Whether that is today or next week; it’s difficult to say. The US are only a few steps behind in terms of softening their monetary policy again, and when that happens, the conditions are perfect for bullish markets. 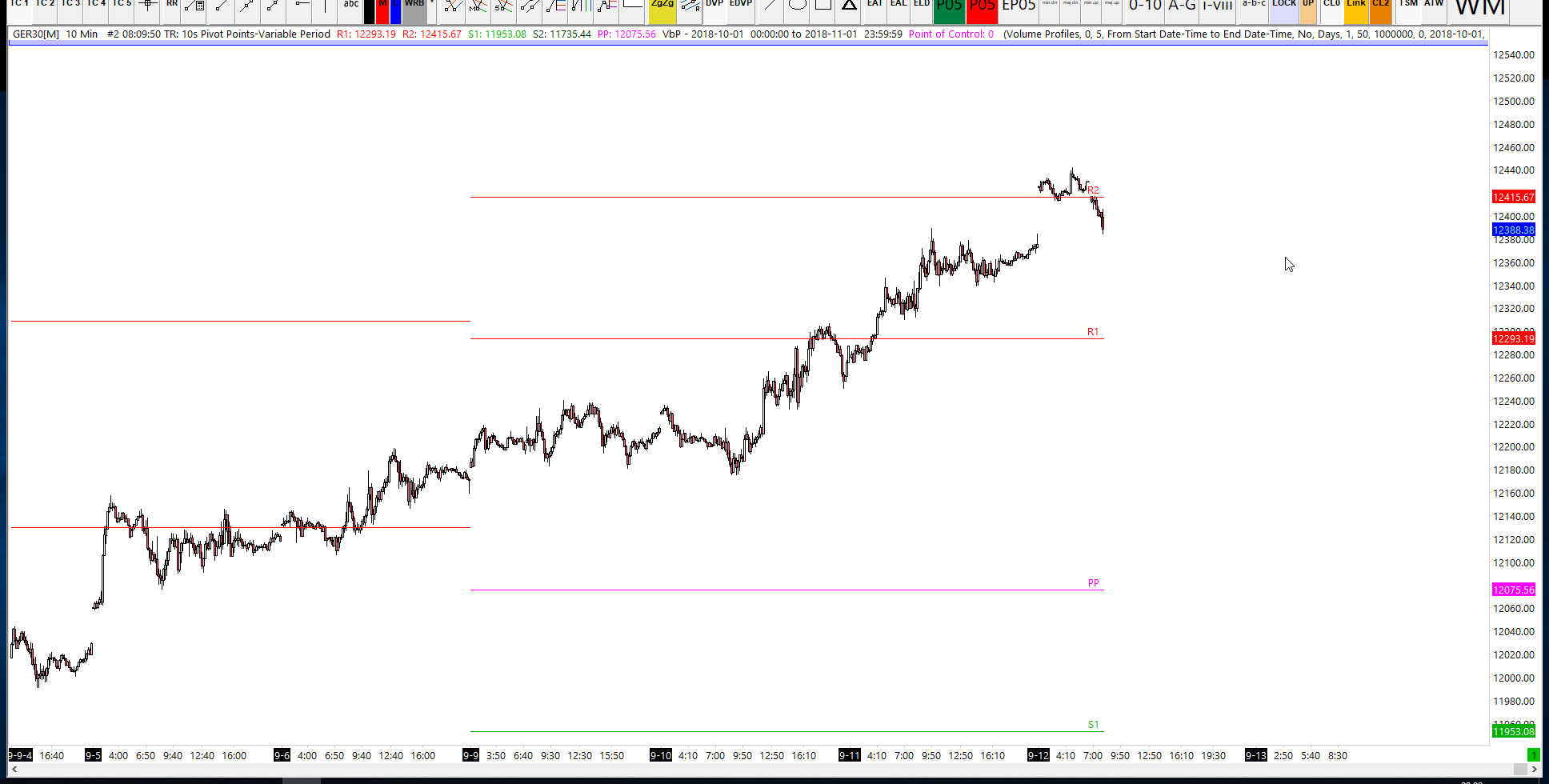 As discussed yesterday, the 12300 was indeed a perfect level to watch. Congratulations to those that managed to take something from the market. 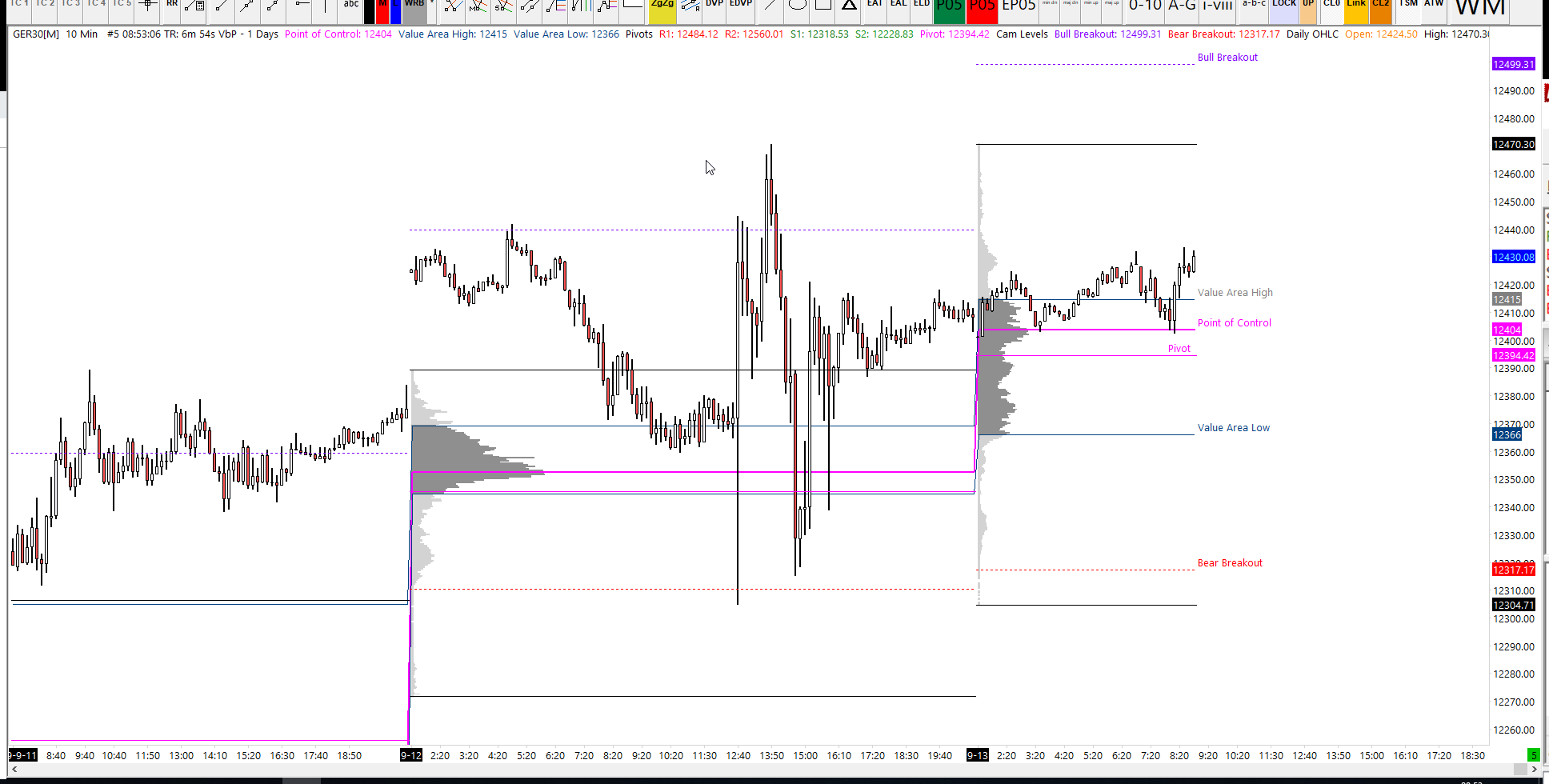 Industrial production in the Eurozone was 0.4% lower in July compared with the previous month and 2% lower on an annual basis, Eurostat said in a report on Thursday. The figure marks a slowdown in contraction after industrial output fell 1.4% in June.

In the europ area, the output of capital goods was up by 1.8% while non-durable consumer goods led in the downfall, followed by energy production. Romania recorded the largest monthly contraction in the bloc, at 3.3%, while Croatia performed best as it upped production by 4.9%. Annually, Estonia and Germany were down 5.4% and 5.3% in industrial production, as Hungary’s output jumped 8.7%.

Let’s take a look at the DAX trading strategy: 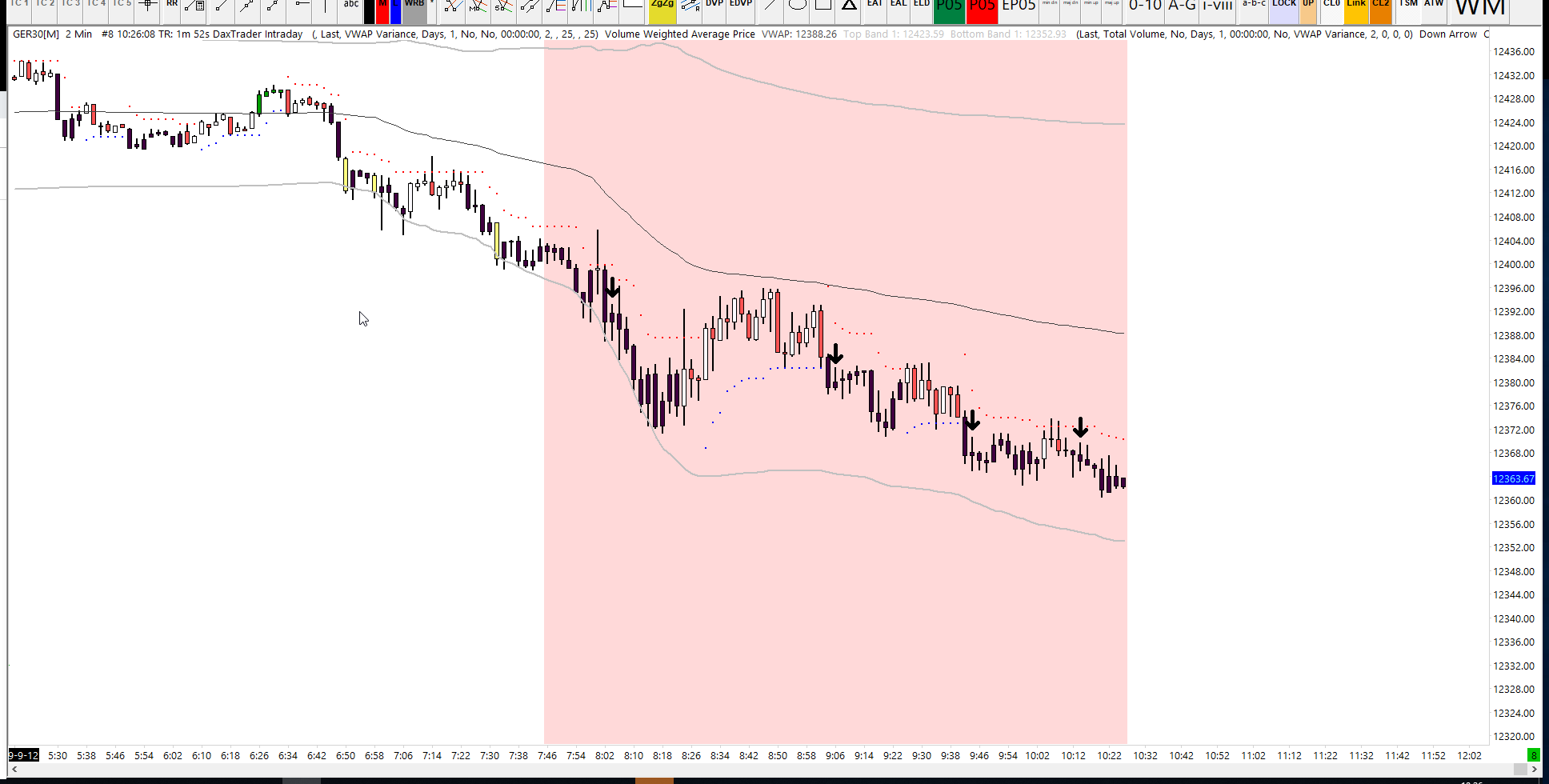 Hello traders. Let’s jump back into the analysis.

Back in July price failed to break 12,600 and began a new series of lows and lower highs leading to a set of around 1300 points. That ignition point at 12,600 is likely to be an interesting area to watch once more. However, before we get there 12 450 was an area that was also interesting at the end of July so I will not be surprised to see movement from that spot as well. Another observation is that we have an inverse head and shoulders pattern, with the two shoulders and the head circled on the chart below. The neckline was broken at the beginning of September and if you measure the distance between the neckline and the head, You can use that as a tool to anticipate how far this current move all run. This technique would suggest 450 is a good target. 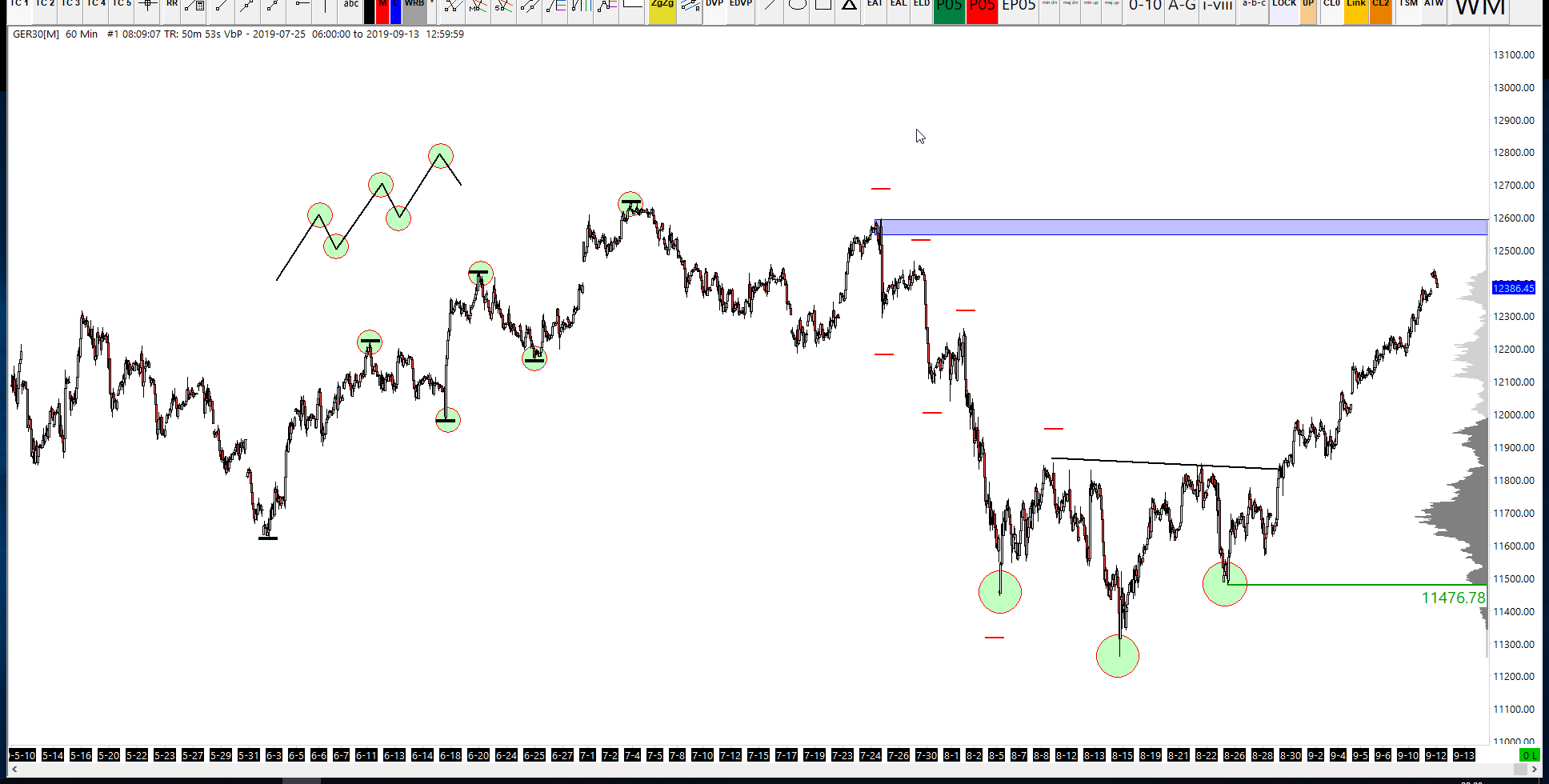 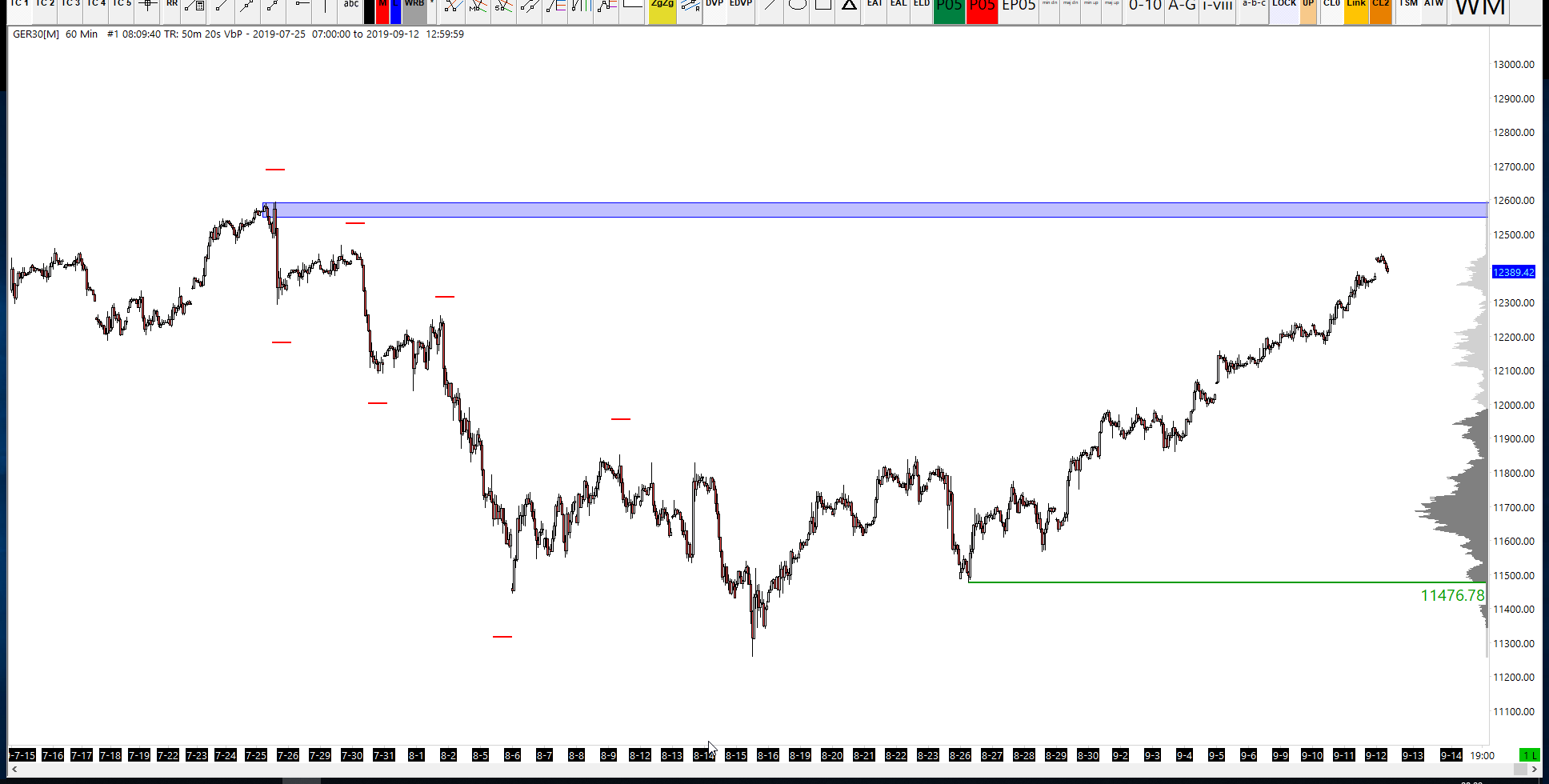 The major DAX trend is clearly bullish but about to approach a couple of major barriers where the market has previously rejected higher prices.

We are already at the weekly R2 so a pullback would be expected and 12300 could be an interesting level to watch.

European stocks started mixed on Thursday as market watchers awaited the European Central Bank’s decision on whether to cut interest rates and introduce a new stimulus program. In other news, reports indicated that Hong Kong Exchange and Clearing Limited’s $36.6 billion bid for the London Stock Exchange Group Plc could be scrutinized in Washington and British American Tobacco plc said that it would trim 2,300 jobs by January next year. Investors also digested CPI data for Germany for August and awaited industrial production data for the European Union later in the day.

Consumer prices in Germany increased by 1.4% in August compared to the same month last year, according to a final Federal Statistical Office (Destatis) report published on Thursday. The figure confirmed previous provisional results and marked a decrease from July’s annual inflation rate of 1.7%.

On a monthly basis, the consumer price index (CPI) declined by 0.2% from July. The harmonized index of consumer prices for Germany in August climbed 1% on an annual basis but dropped by 0.1% month-on-month. 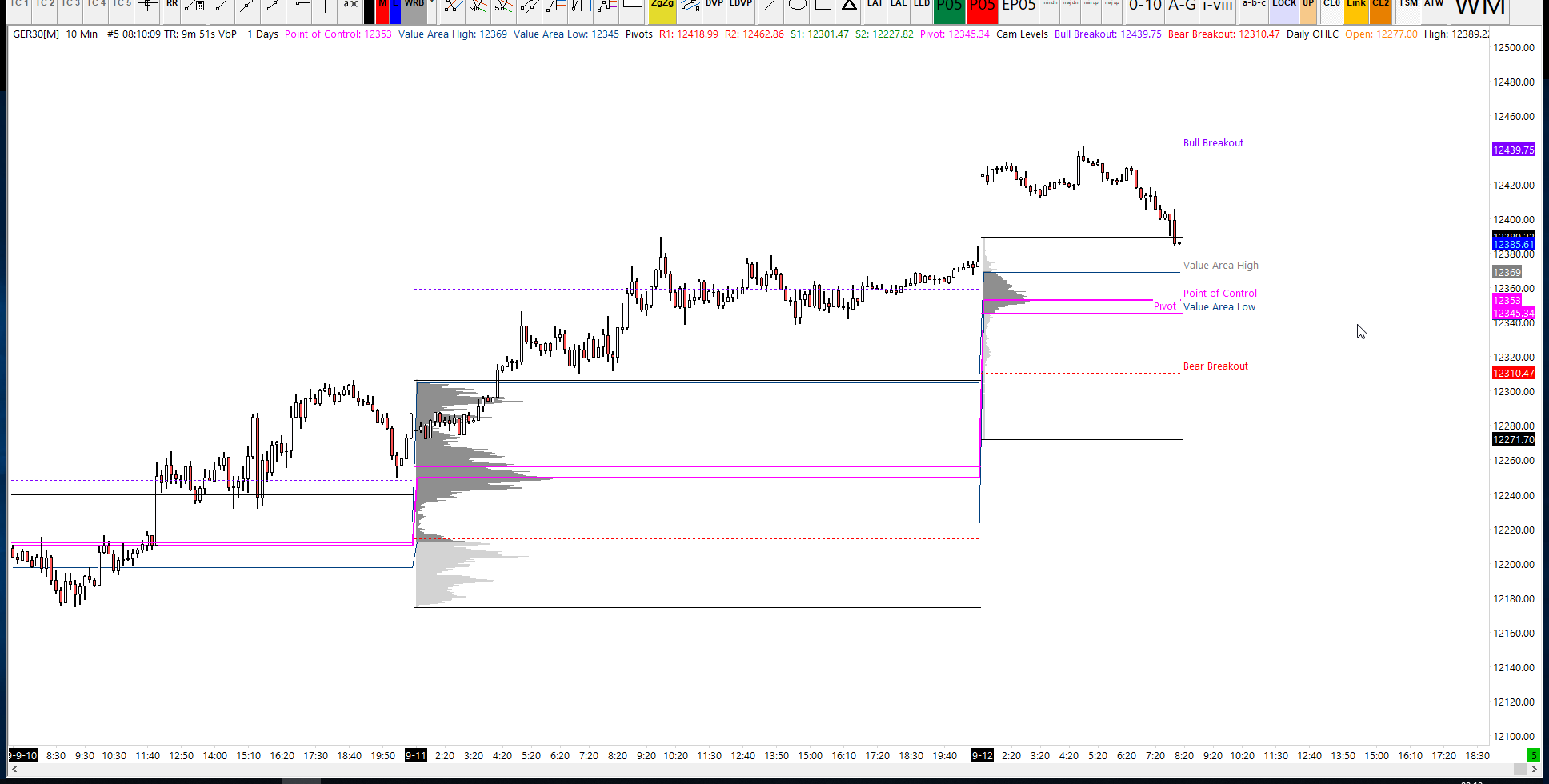 Currently on annual leave and will be back Thursday.

The normal premium services will function as normal including signals, support and coaching. Use the time to refresh yourself of the advanced technical analysis videos on the member section (full members only).

I will provide some minor updates in the meantime