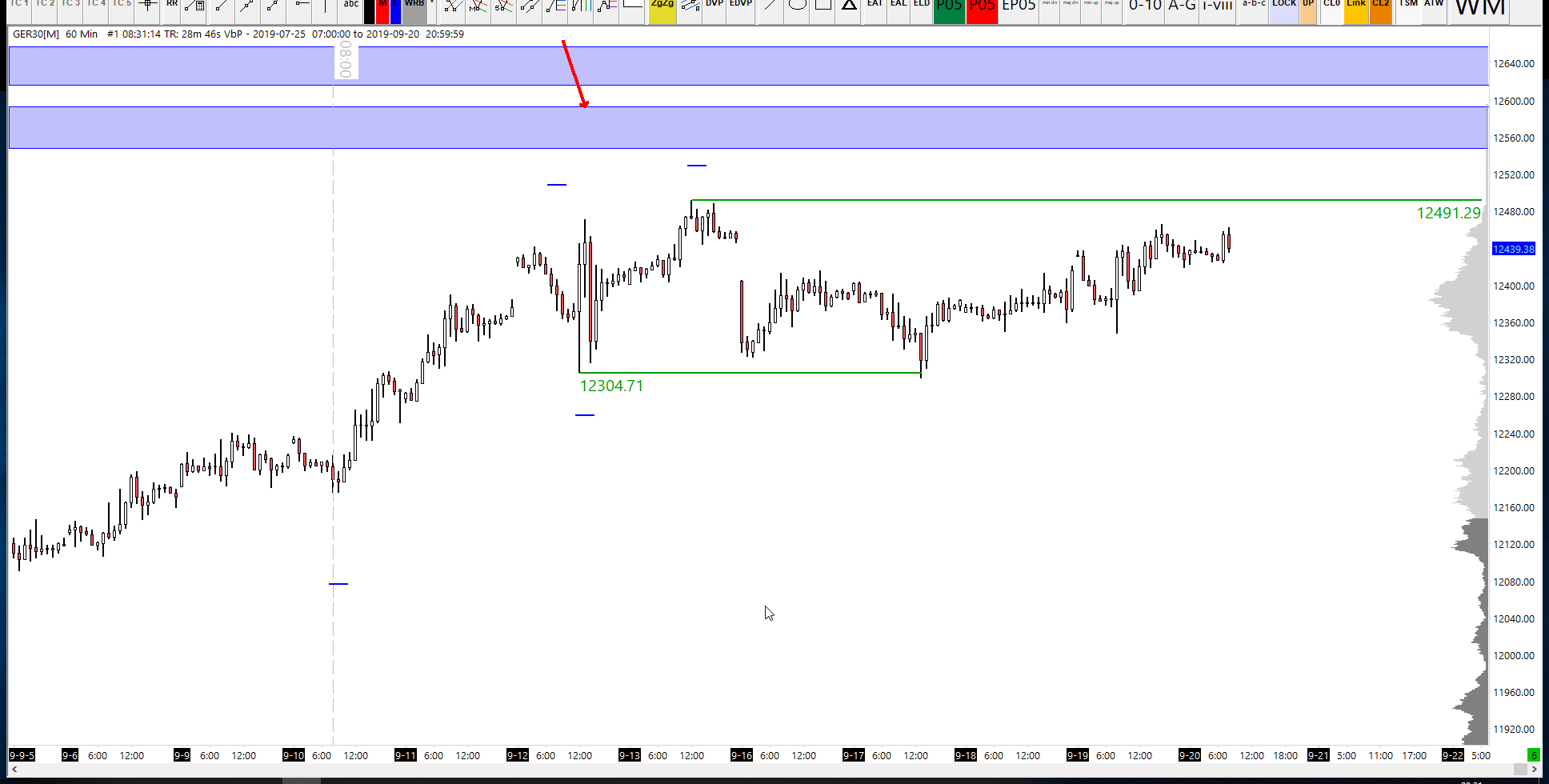 Today is the last day for the DAX TECHNICAL ANALYSIS WEEK 38 I am watching out for a break above 490 and challenging one of the blue resistance zones from the middle of this year. It’s about time that this range is broken and the DAX finds some new momentum.

If the market decides to find lower prices first, then the 360 level looks interesting in the short term. We saw a reaction from that zone yesterday, so I would like to see if the buyers are still there. I am saying this because this morning we already saw a rejection of higher prices.

In other markets, we are still very busy on the forex side, with another seven signals yesterday and already five this morning. When the market provides opportunities, you should take them, regardless of which market it is.

In other news Major European stock markets were mostly flat at the opening bell on Friday, after data from Germany showed a lower-than-expected annual increase in producer prices and a monthly decline of 0.5%. Meanwhile, uncertainties related to Brexit and trade continued. Although European Commission President Jean-Claude Juncker said he believes a Brexit deal is possible, no tangible progress in talks with London has been revealed.

Also, Irish Prime Minister Leo Varadkar said on Friday that the “gap” with the United Kingdom on Brexit remains wide, as the country has yet to submit “serious proposals” for a withdrawal deal. His remark somewhat contradicts the confirmation from Brussels that “written proposals” from London have been received.

In an interview with BBC Radio, Varadkar added that the “change of approach” introduced by new Prime Minister Boris Johnson has created “serious problems.”

Traders were digesting signals the United States Federal Reserve, which yesterday cut rates and the subsequent hint from the Bank of Japan that it could boost stimulus next month after a policy review. This is excellent news for equities, especially the German DAX. So the video should pretty much explain my thinking today. 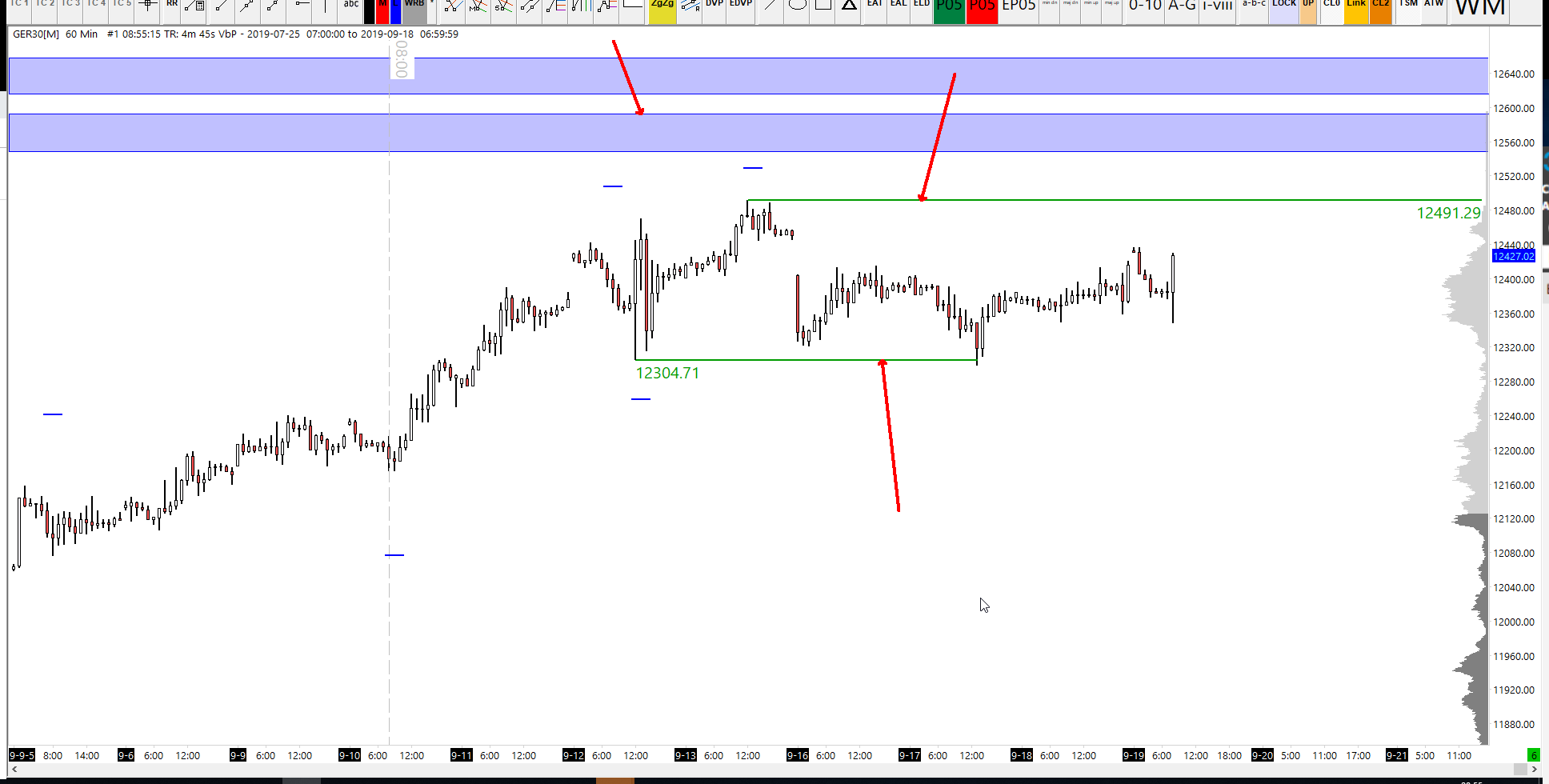 The DAX is currently range-bound between 12300 – 12490. The trend-defining support level was recently pierced, so the series of higher highs and higher lows is over. I am now waiting for a break (probably higher) 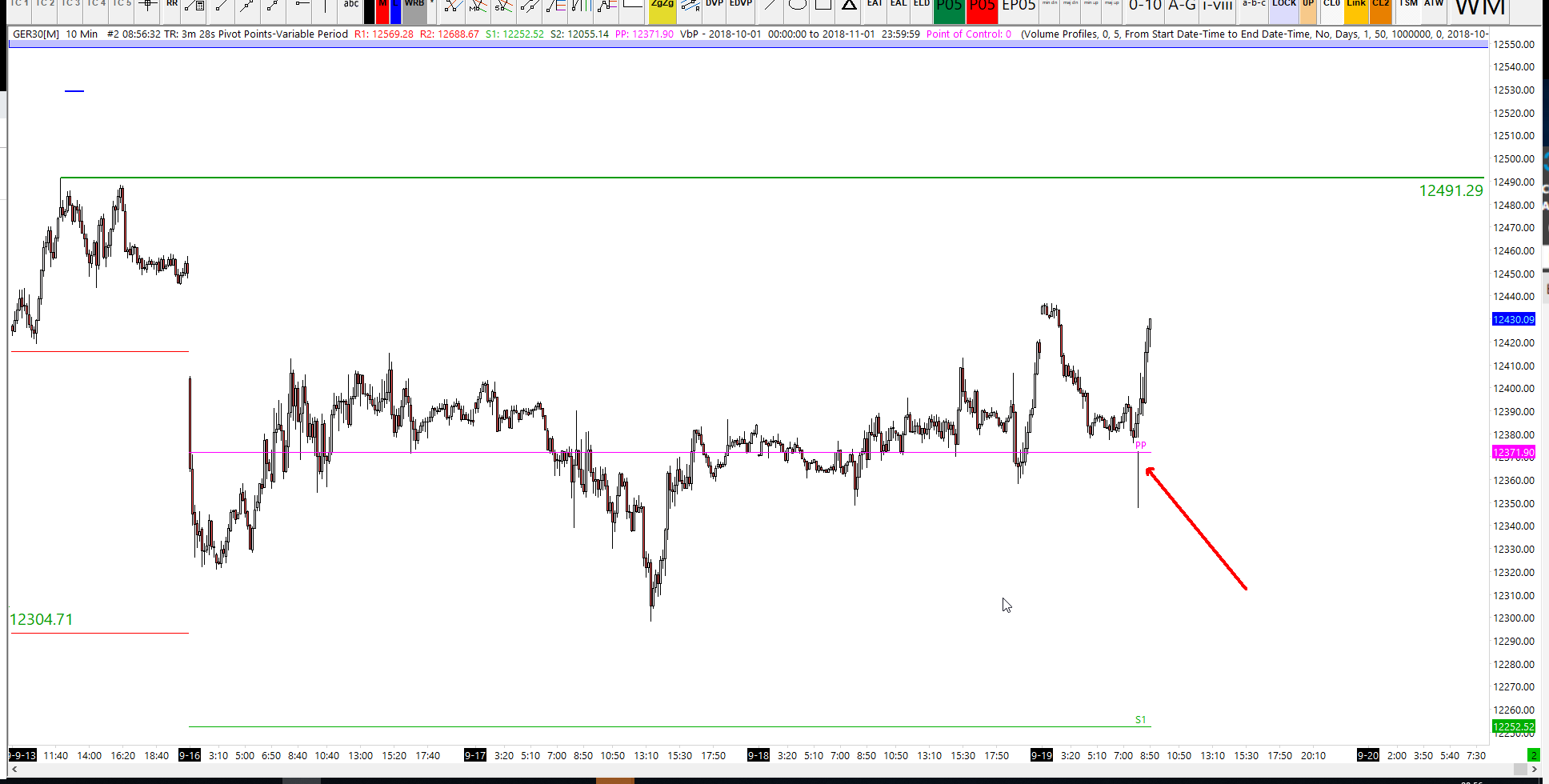 Notice how the weekly DAX pivot has held nicely as support and the price has used that zone as a platform to bounce. I would like to see some momentum here and the price continue to build. 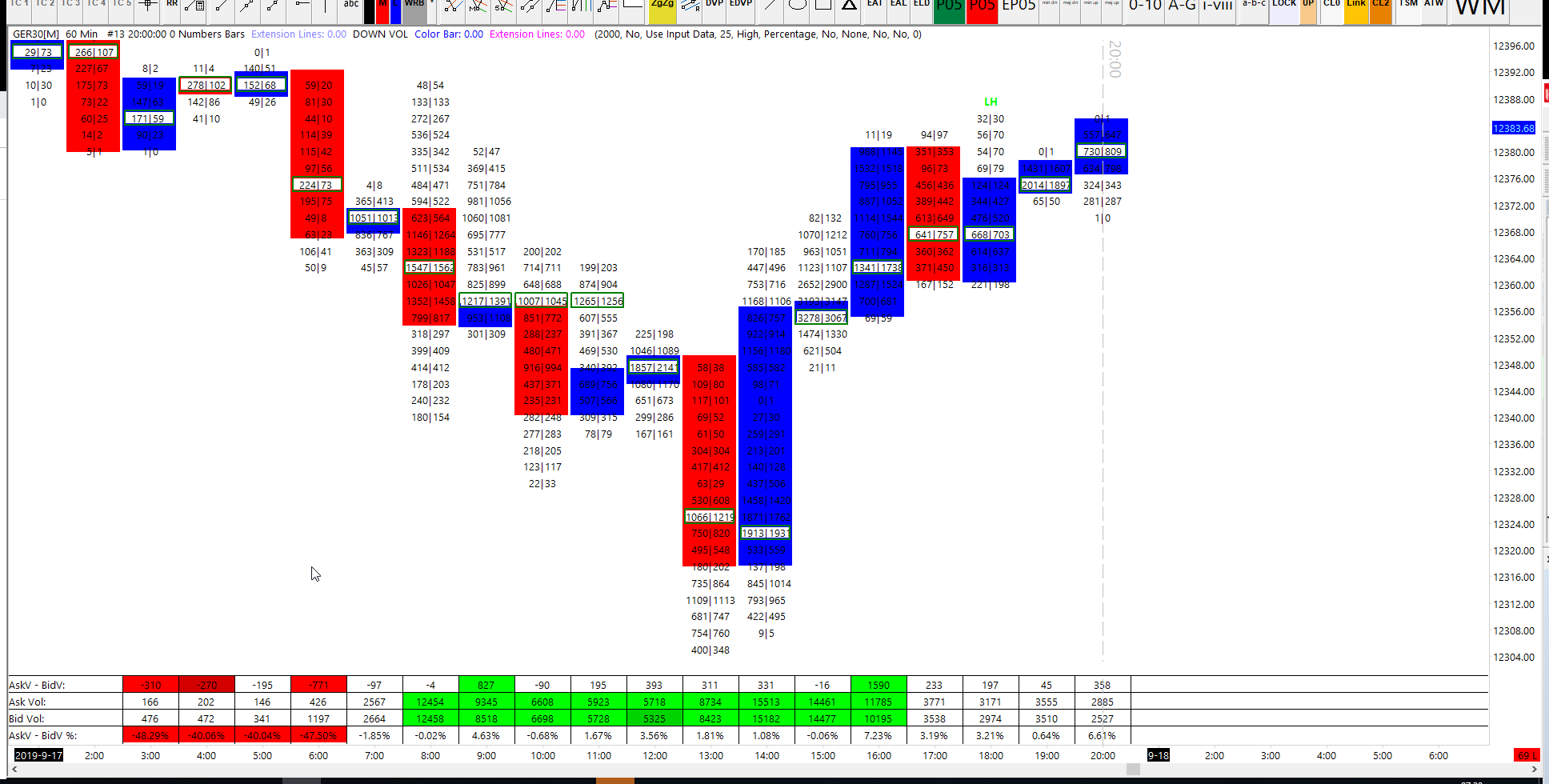 The chart above shows an hourly DAX chart with the numbers bar study applied (on Sierra charts). The numbers bar study is similar to the footprint charts you get with Market Delta. This numbers bar chart allows us to see the bid/ask volume from within each hourly candle to understand which price point the majority of DAX volume was traded. Red bars and blues bars are either bearish or bullish as normal. The point of control is visible by its highlighted, colourless area within the candle body.

Using this chart, I notice the 12355 area as interesting to watch for support potential today, based on the 15:00 candle POC. If we do manage to hold that level and bounce, I would expect to see a bullish day. 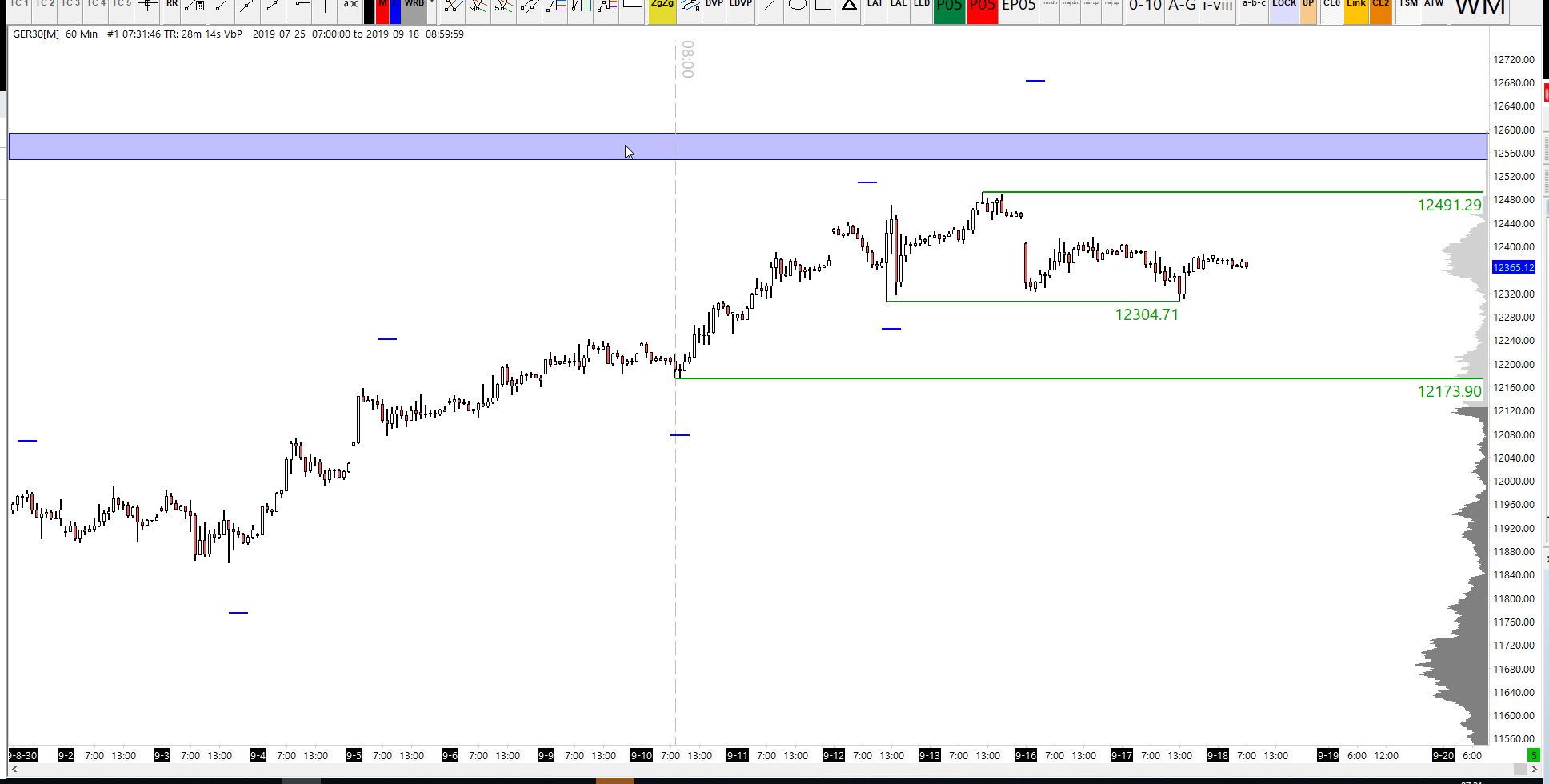 The DAX is currently range-bound between 12300 – 12490. We have a couple of failed attempts to break support at 12300 and it appears to remain under pressure today. 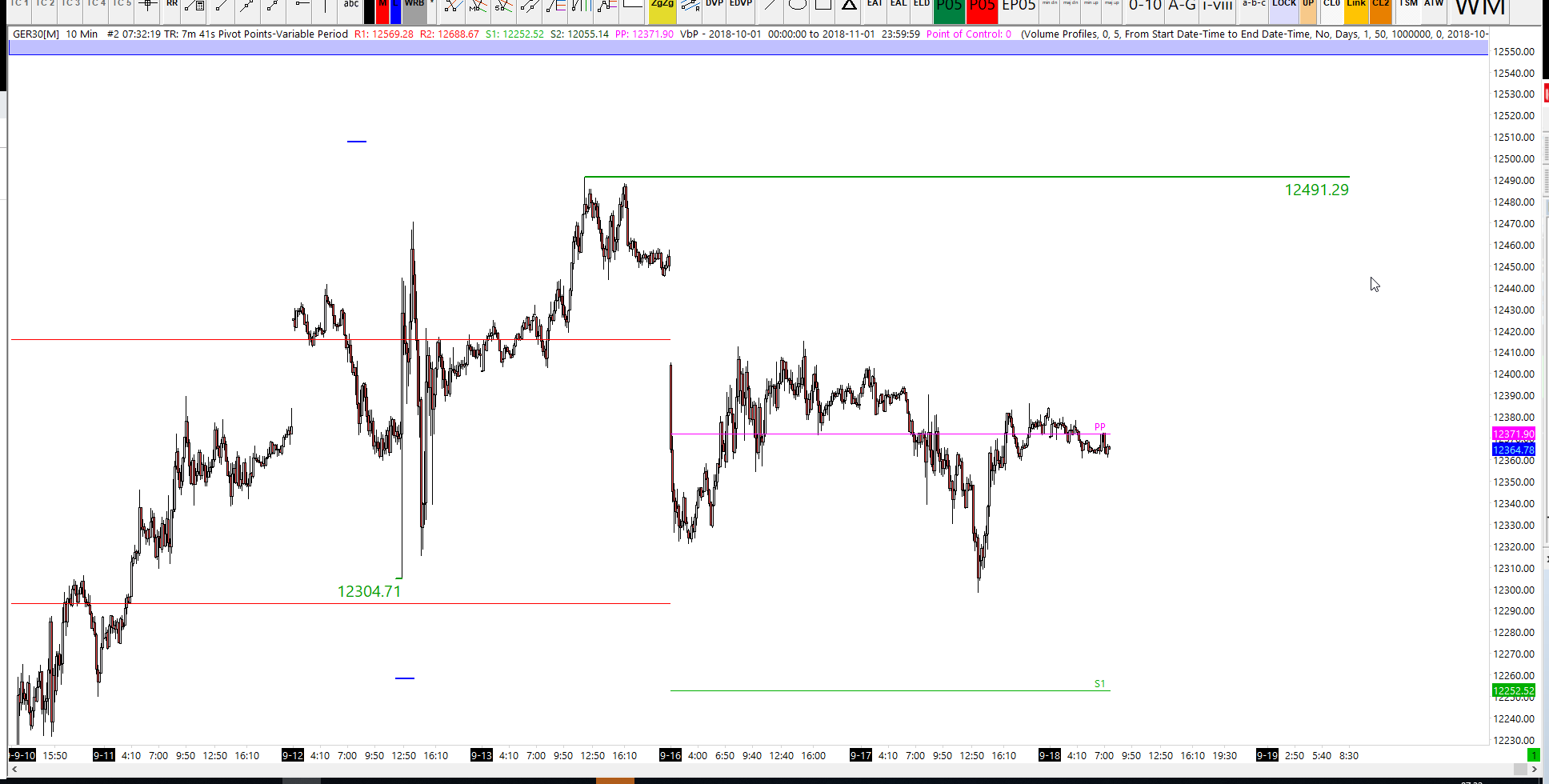 The minor trend is bearish below 12413, which is the high created just underneath that gap. Once/if that high goes, then the gap close should also follow.

Get Trading Signals
There is no recession in Europe, but the euro area is seeing an economic slowdown, European Central Bank Governing Council member and Bank of France Governor Francois Villeroy de Galhau said on Wednesday. He added that it is most likely the ECB will keep interest rates low for a long time, agreeing with expectations from Bank of Greece Governor Yannis Stournaras. 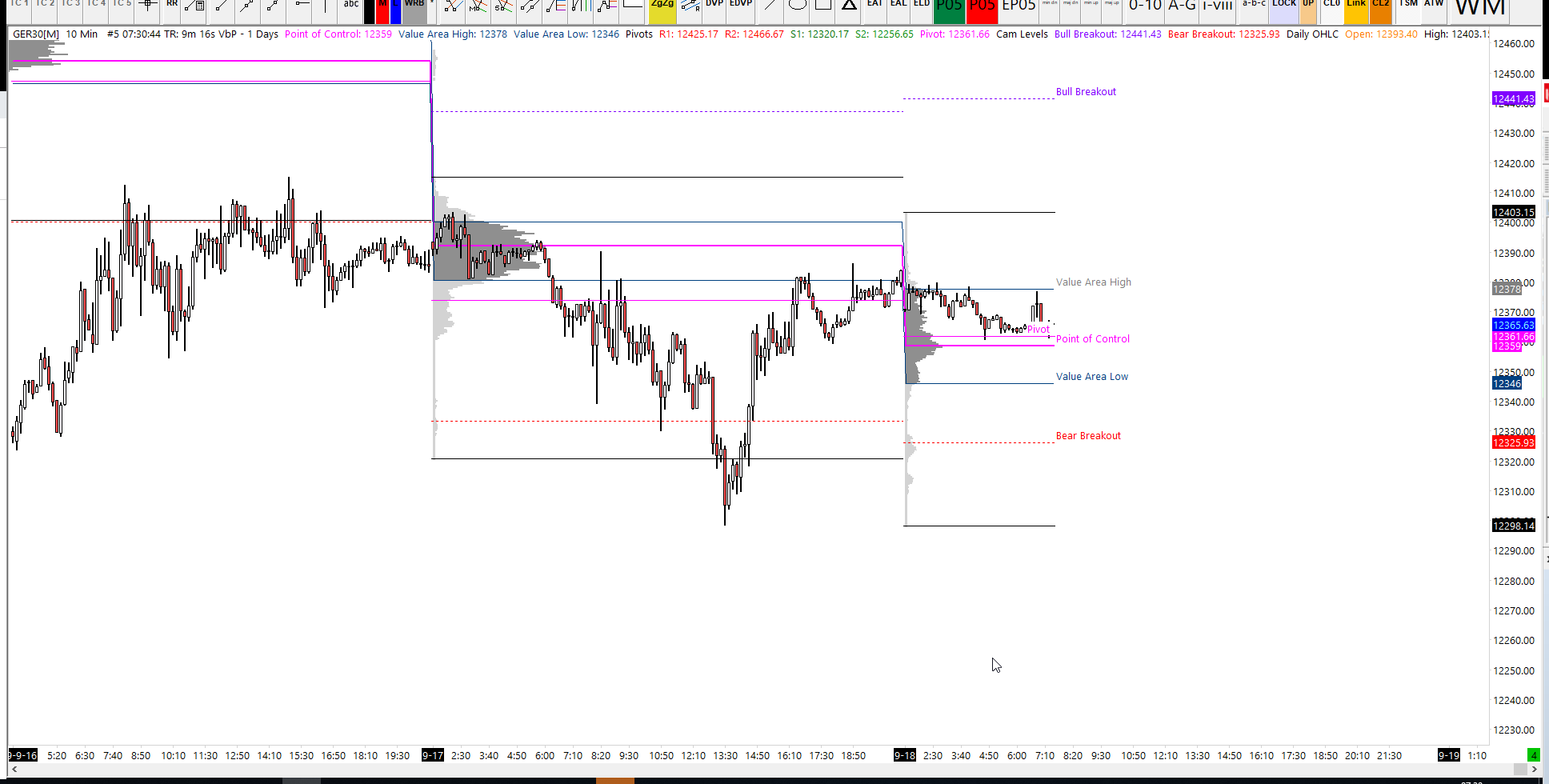 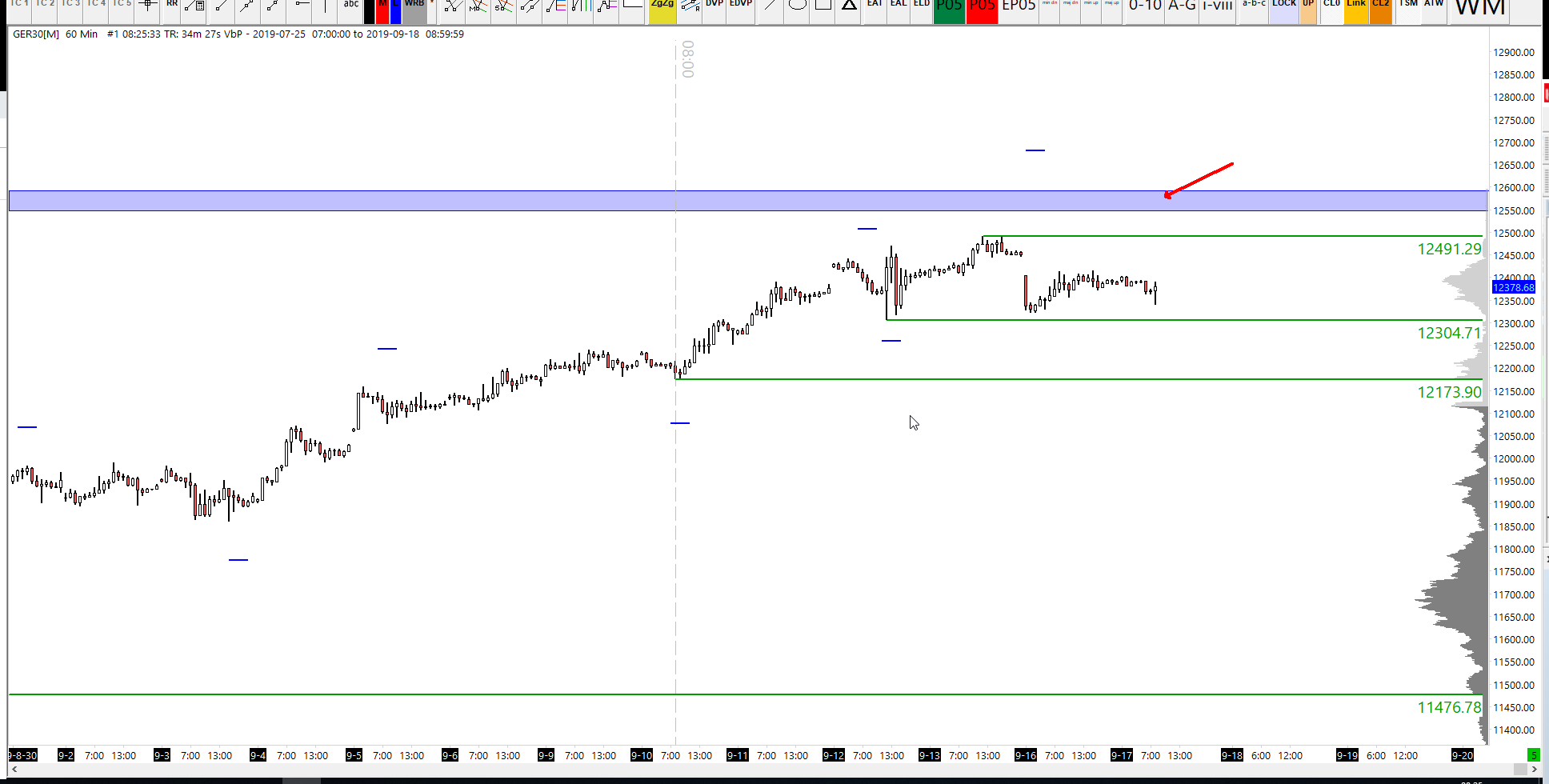 The DAX is still technically bullish above 12300. The gap yesterday threatened to break to new lows, but held on. Therefore this remains the trend-defining levels. 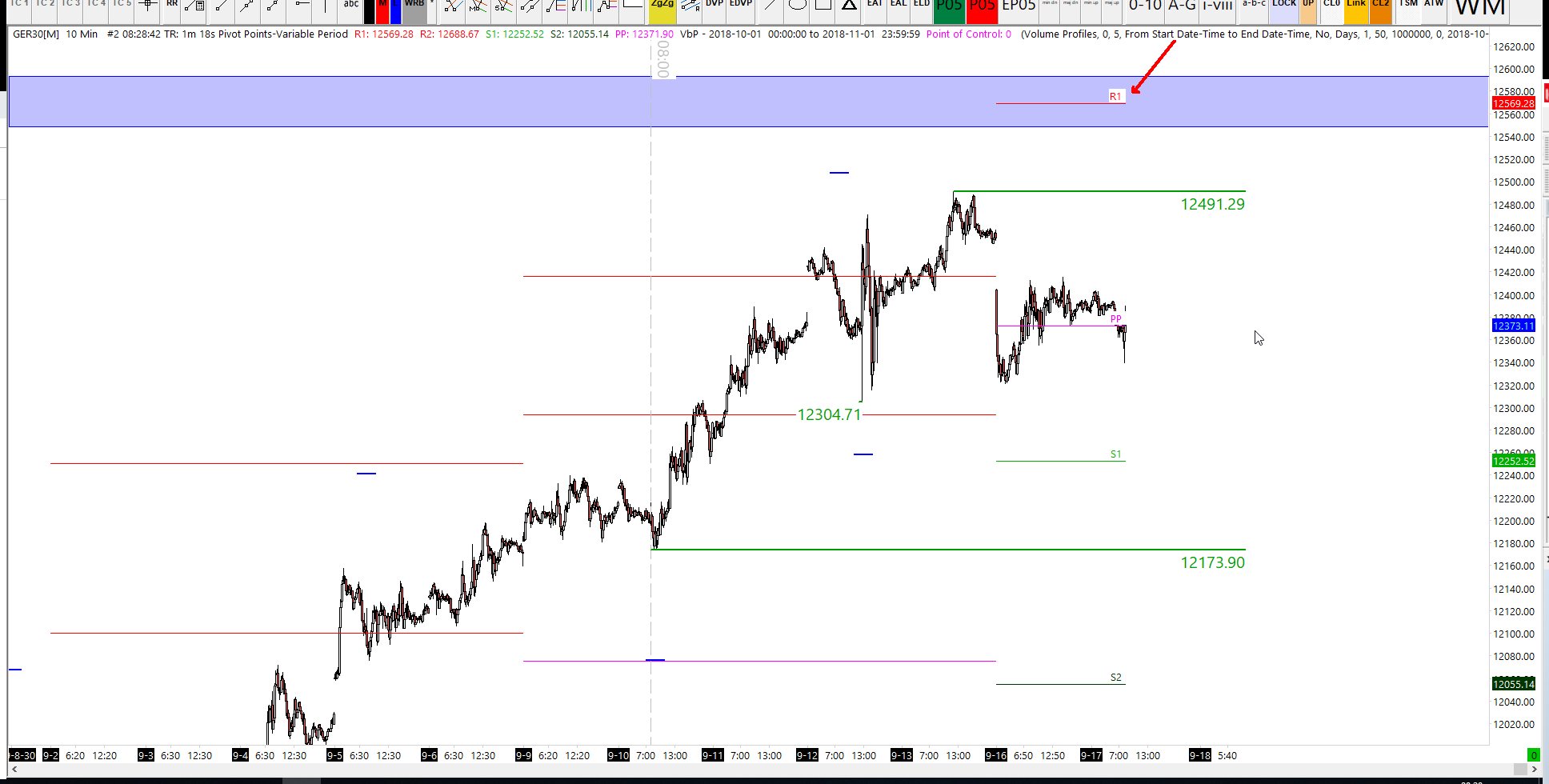 Currently trading around the weekly pivot level. The market has rejected lower prices around 12330, but has still failed to close the gap from Monday morning. Watch for a break through one of those levels.

Get Trading Signals
Investors showed caution on Tuesday at the start of trading at major stock exchanges in Europe following a strong drop in China. Losses were modest but wide as focus remained on geopolitical implications and the surge of oil prices after an attack last week by unknown forces with drones or missiles on the heart of Saudi Arabia’s production of crude. Market participants are bracing for a monetary policy update from the United States Federal Reserve, scheduled for tomorrow. The FTSE 100 stock index lost 0.2% in the first transactions in London. Melrose was the worst performer, sinking 1.99%. The German DAX was down 0.1%, mostly pressured by Infineon and Continental, which fell 0.7% and 0.67%, respectively. The CAC 40 retreated by a mere 0.04%. Peugeot slumped 2.17% to the bottom of the pile. 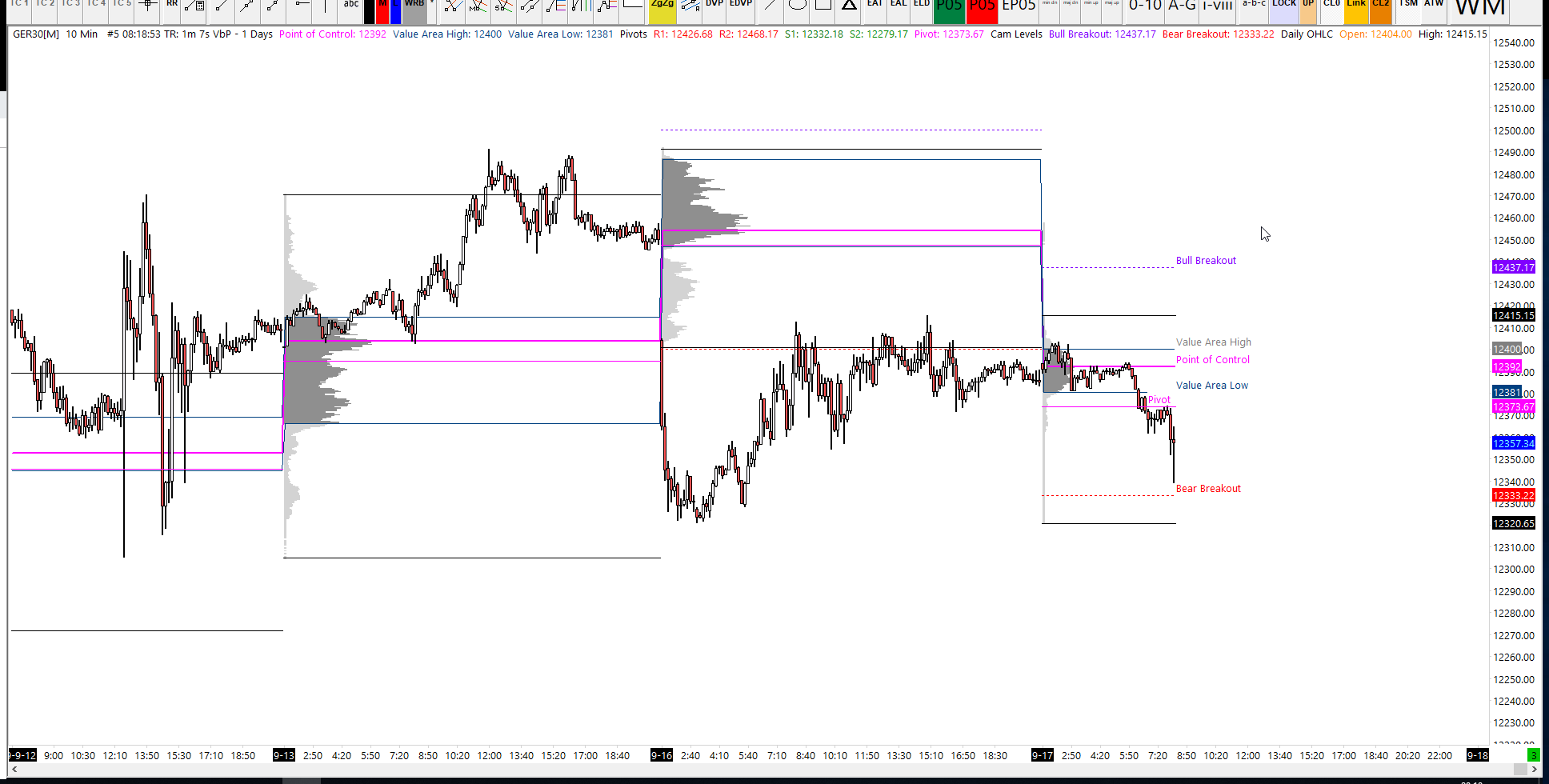 I only took one DAX trade yesterday, as the trading conditions were not great. The trade that I took was a long around 392, stop loss was around 362, so risking around 30 points. Don’t forget that my stop loss sizes are not important, because I only risk 1% of my account on the trade. That means if the trade had a 5 point stop loss and lost, it was cost the same as a trade with a 50 point stop loss. How do I do that? I adjust the lot size on each trade, depending on the size of the stop loss.

See the trading strategy below to appreciate just how choppy the market conditions were. 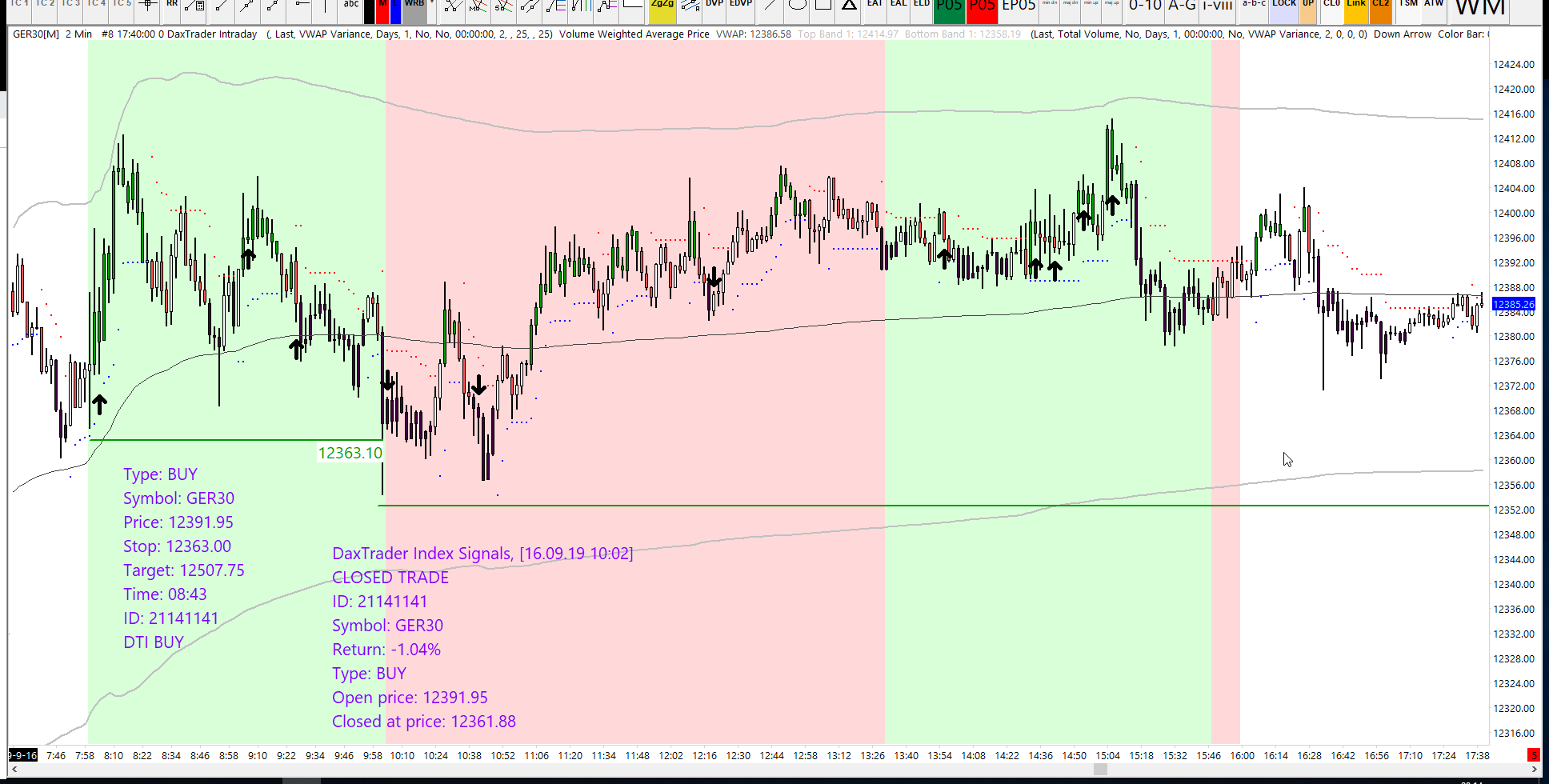 Last week we saw a DAX rally of approximately 300 points from the lows of Tuesday to the highs of Friday. The most interesting part of last week’s price action was Thursdays ECB rate decision. The decision to cut rates caused quite a lot of volatility relative to the quiet week we had witnessed to that point. The price action volatility was relative to approximately 50% of the weekly range. The reason it was important is that it demonstrates a commitment to easy monetary policy, which is great for bullish markets.

The Thursday low of 12 300 will be a significant area to watch this morning. Because the price can break below that level without taking a new high, then we could see a more significant pullback down towards 12,000. However, if we do manage to close the gap from this morning, and then go on to take out a new high, was also staying above 12 300, then our trend continues. The gap from this morning should close around 12444, with last week’s high around 12491.

This week I am interested in watching a test of 12,600-12650 zone and beyond that, the likes of which we have not seen for some time. The market remains bullish for now. 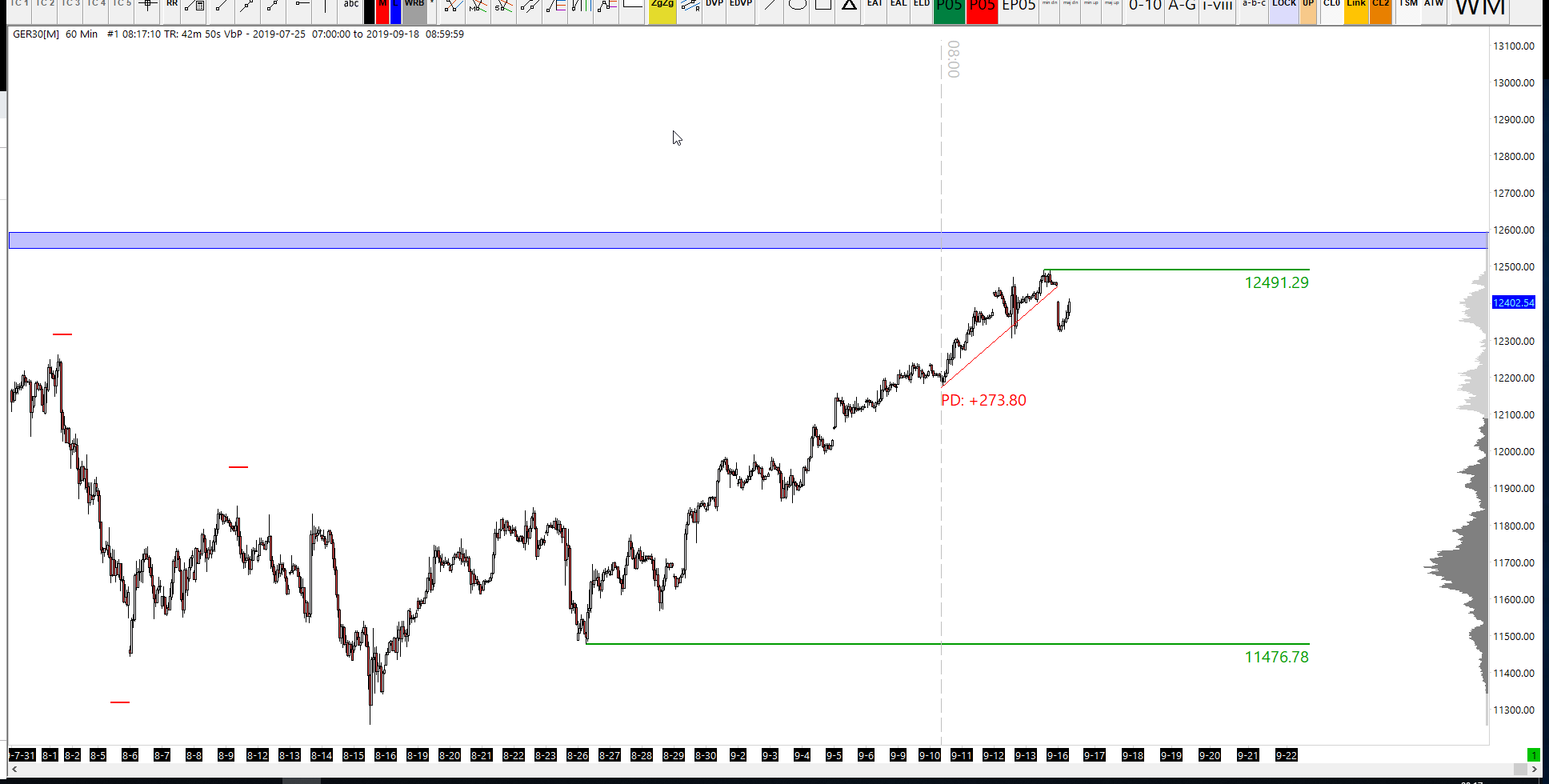 European markets started trade in the red on Monday as investors turned to safe haven assets after a drone struck a Saudi Aramco site on Sunday, leading oil prices to jump 15% at one point and United States President Donald Trump to say that the US is “locked and loaded” and waiting for Saudi Arabia to confirm who attacked Aramco. Aviation was hit heavily, with airlines and airplane manufacturers leading the losses. 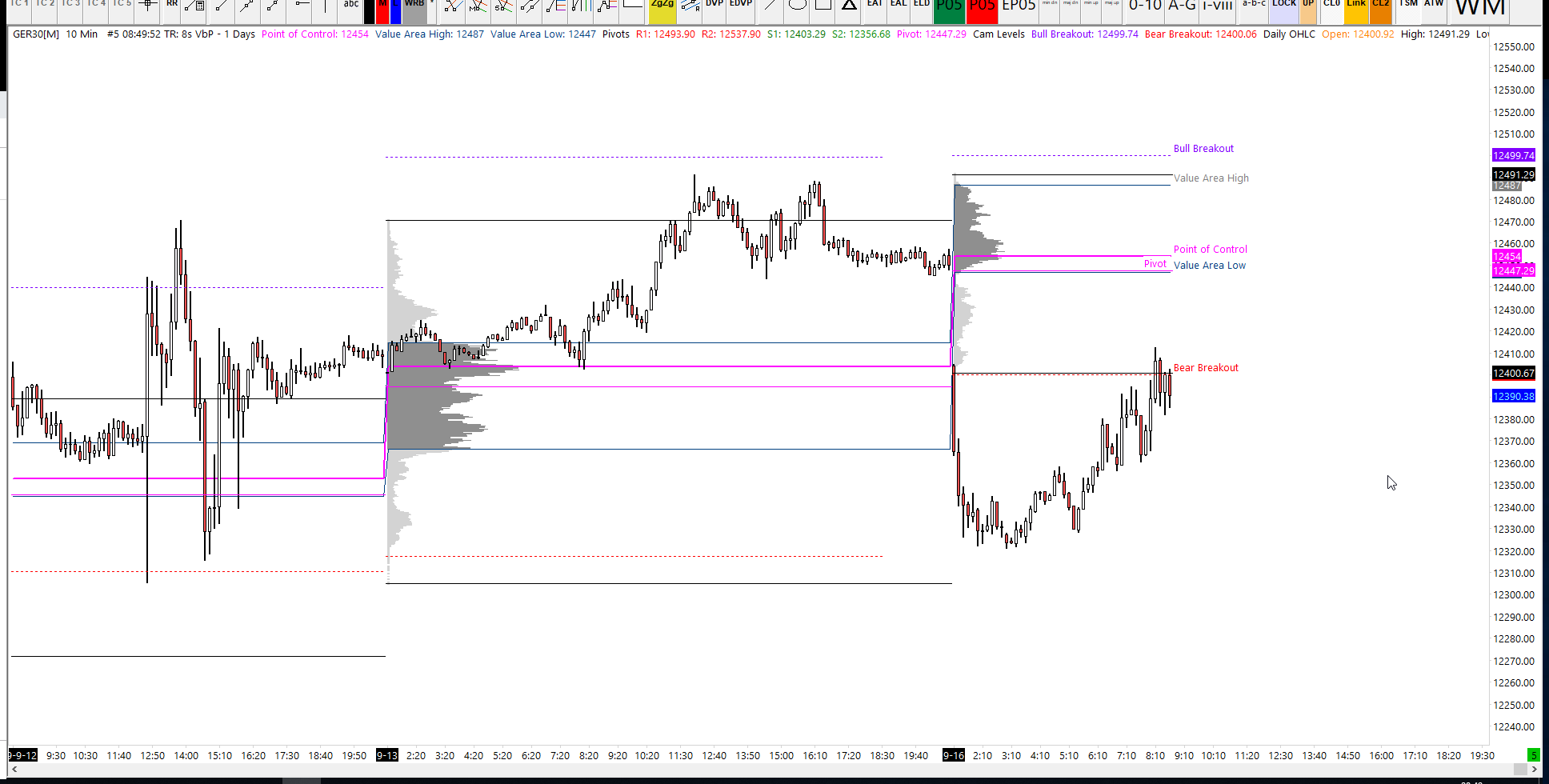 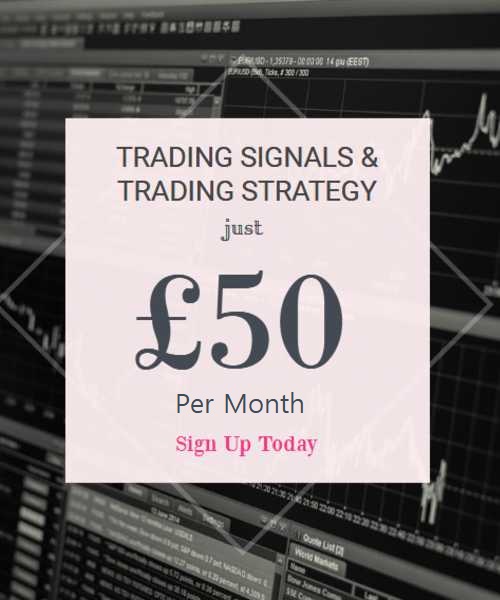