The German DAX remains clearly bearish for now, however that outlook may change if the market manages to hold the recent lows of 11814 and breaks back above 12000. The global economic slowdown remains in focus for now, which continues to support a bearish bias, with soft manufacturing numbers and additional trade tariffs adding further fuel adding to the fire.

Today we have NFP numbers to watch for and I am expecting to see a ‘miss’ somewhere in the region of 100k. I will not have my German DAX algorithm open this afternoon, so no new trades will come out, I will probably also close out any DAX trades before NFP. I will be keeping my forex trades open through that, and closing everything out around 8pm this evening (UK time). 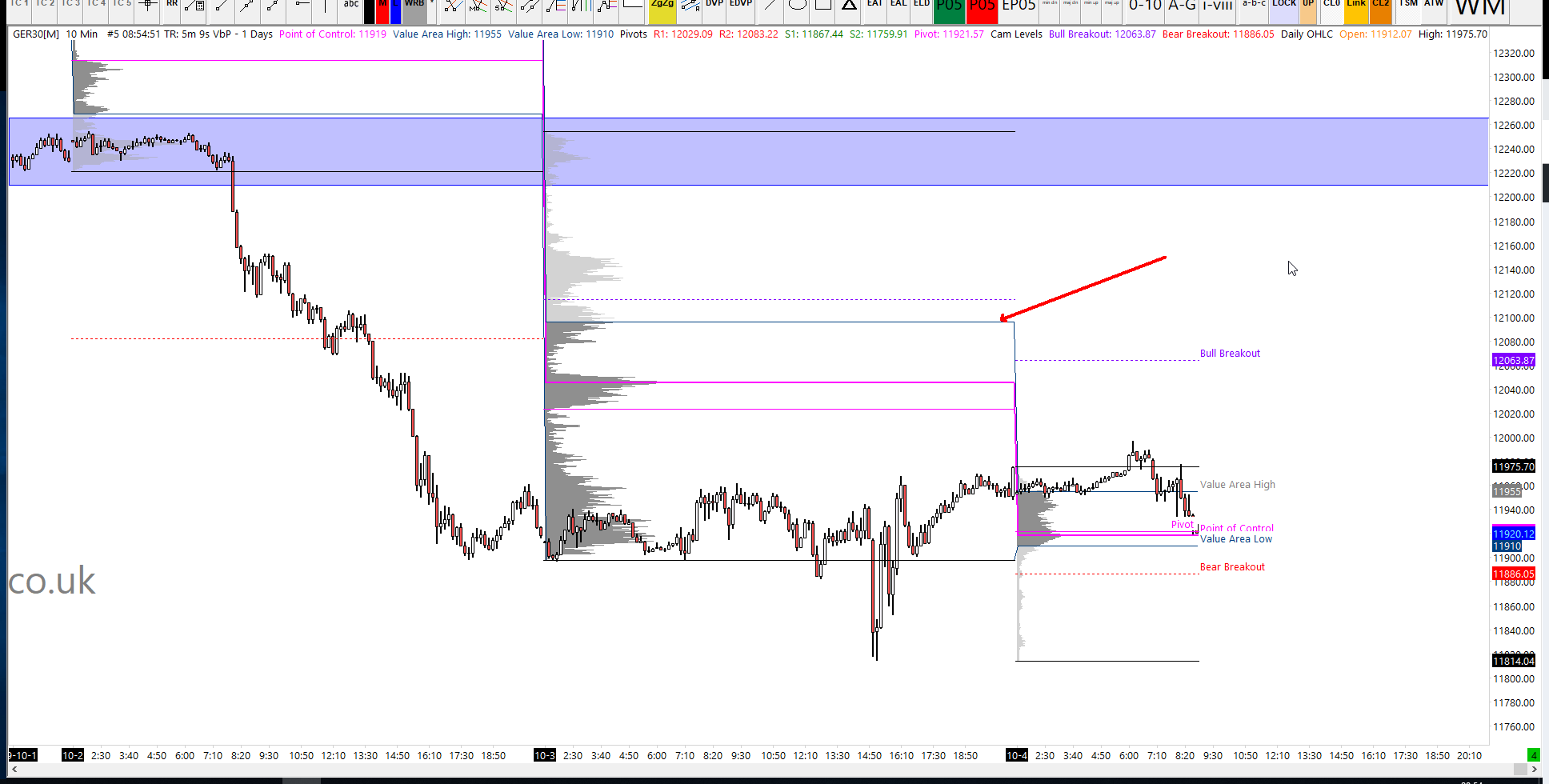 There was a recent sell setup from the DAX trading strategy this morning and I suspect that to be the case throughout the day. Yesterday was just a quiet day, with not much to report on. 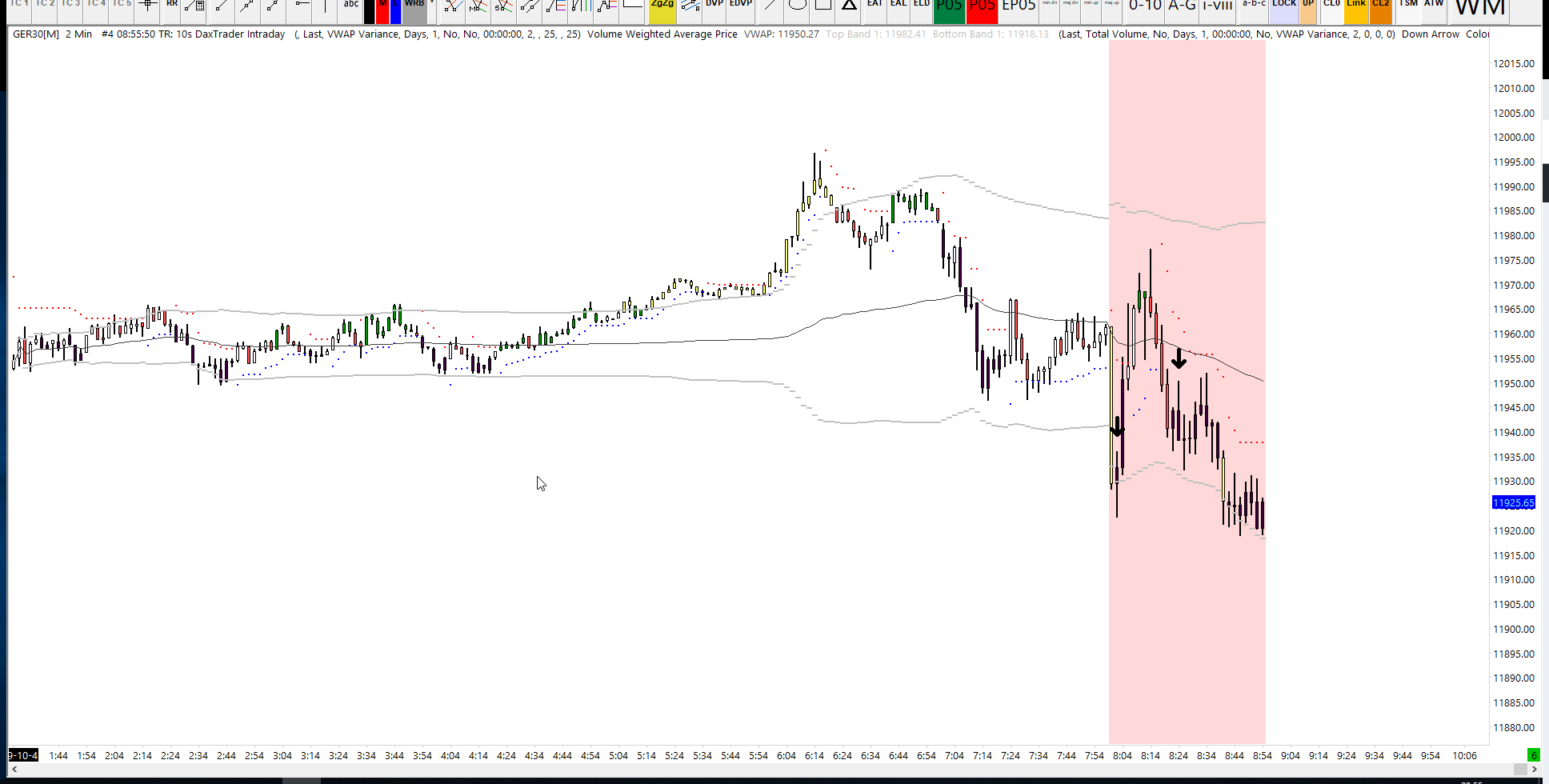 Eurex is closed today (except FDAX and FDXM) but the CFD market is still open. The big German players will not be participating today and my trading may also be quiet.

What a sell-off yesterday! We caught a piece of it in the dax trading signals channel with this trade, which went on to comfortably reach our target:

Get Trading Signals
In fact over the last two days we’ve dumped nearly 600 points from the recent highs and without much participation this morning from the German funds, perhaps we will lack any real buying volume to absorb the selling pressure. I would not be surprised to see some consolidation whilst the market digests this rapid decline. 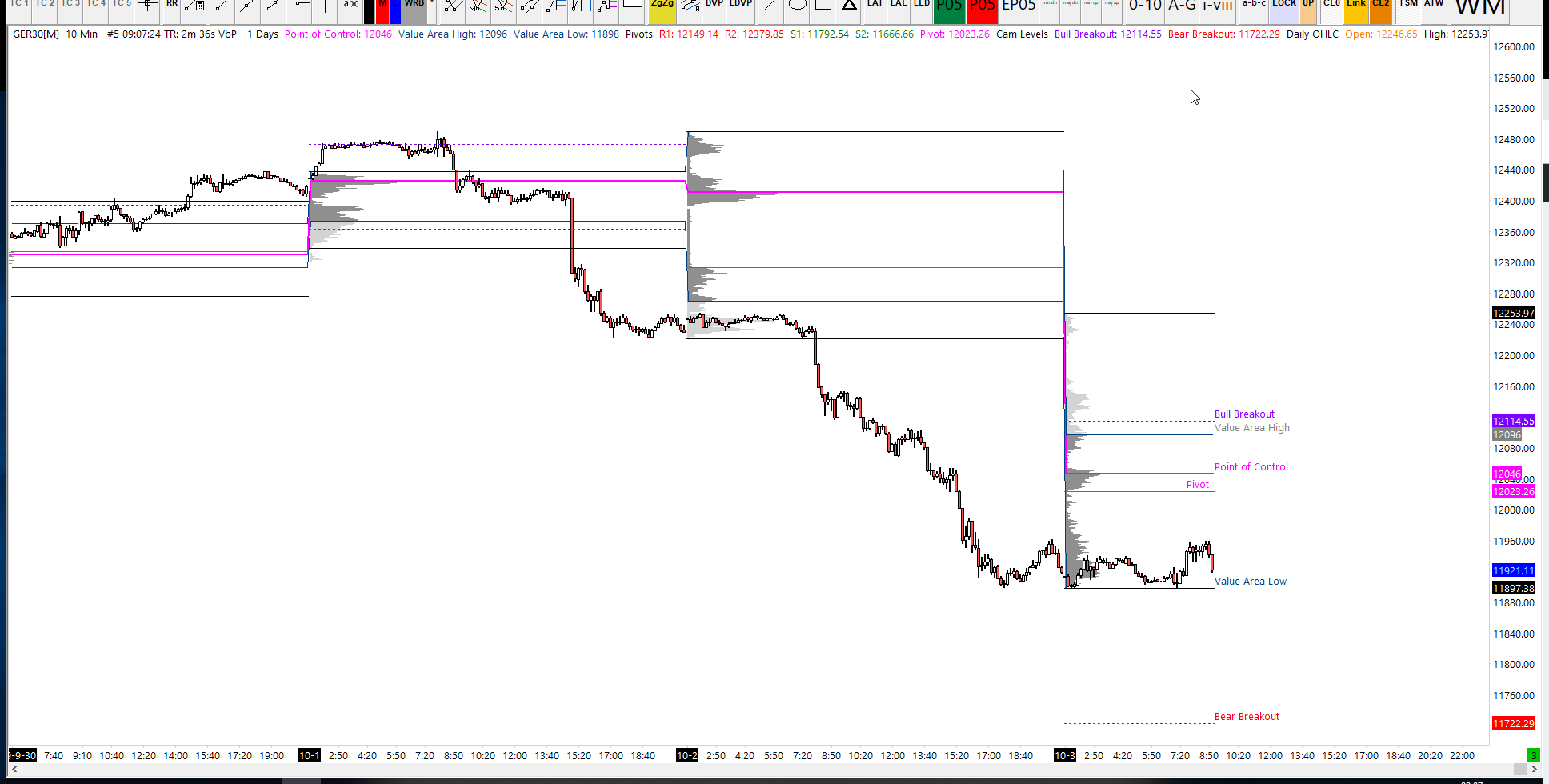 History of the German Unity Day

Since 1990, the ‘Tag der Deutschen Einheit’ has been a national holiday in Germany. It is the only official national holiday. All other holidays are managed at a federal level. The reunification of Germany took place on October 3rd 1990 when the former German Democratic Republic (GDR) was incorporated into the Federal Republic of Germany (FRG). Following the GDR’s first free elections on March 18th 1990, negotiations between the GDR and FRG culminated in a Unification Treaty. Further negotiations between the GDR and FRG and the four occupying powers produced the so-called “Two Plus Four Treaty” granting full sovereignty to a unified German state, whose two halves had previously been bound by a number of limitations as a result of its post-WWII-status as an occupied nation. The German Unification Day has been celebrated in the capital of whichever federal state has got the chair in the Federal Assembly (there are 16 federal states in Germany). German Unification Day wasn’t added as an additional holiday. In the west, it replaced the original Day of German Unity, which was the anniversary of a protest on June 17th 1953 in East Germany. In East Germany, the national holiday was 7th October, the Day of the Republic (Tag der Republik), which commemorated the foundation of the GDR in 1949. (OfficialHoliday.com)

Just look at all these trading opportunities from the DAX trading strategy. Yesterday was just one of those days where you jump in and ride the momentum, so congratulations to those that joined me. 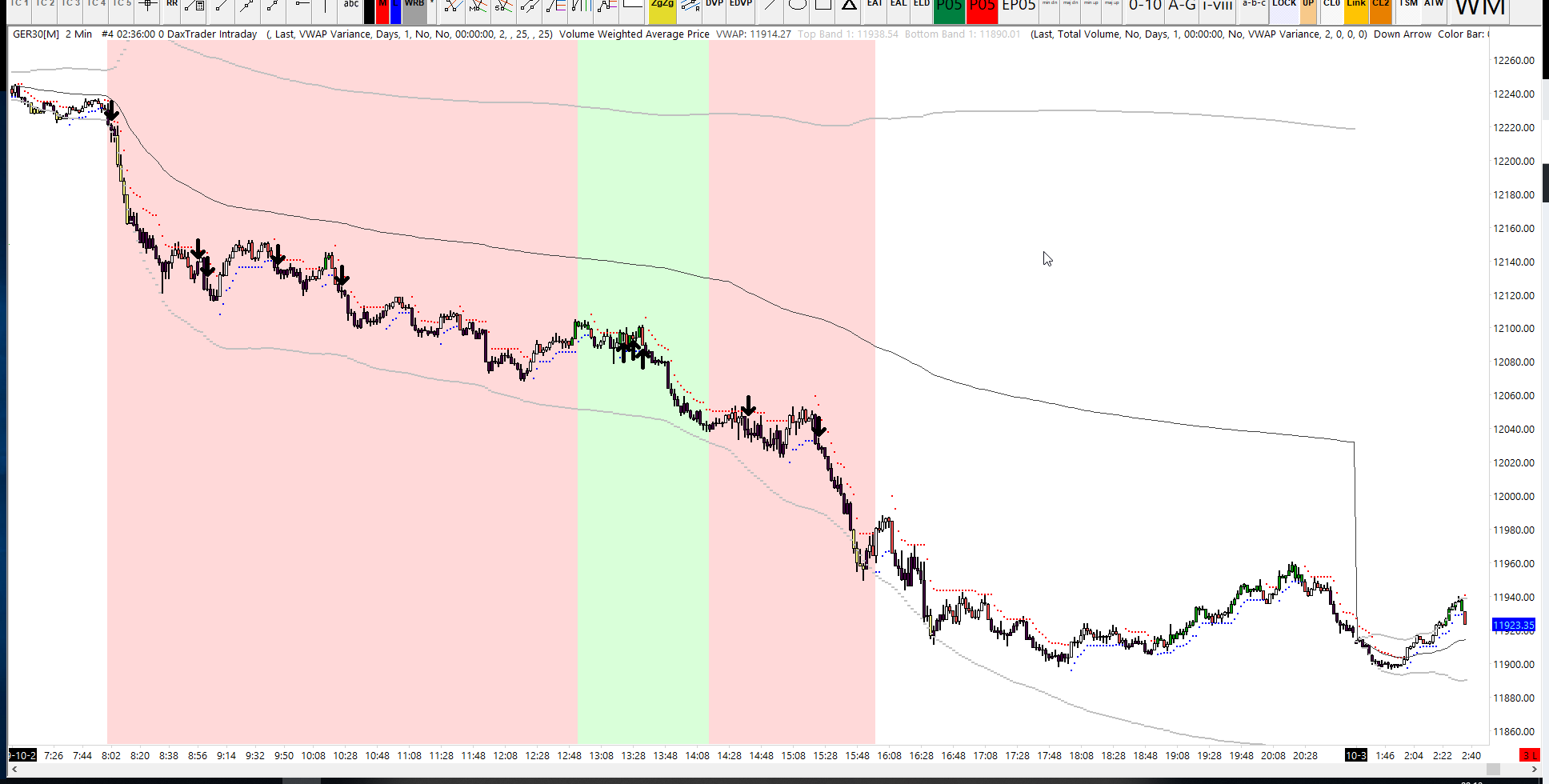 Get The Trading Strategy
Get Trading Signals

The overnight highs have failed to make any progress above the 480 zone, which could once again provide further resistance on the next test. We are currently testing the high volume area from yesterday afternoon, with the Point of Control (POC) at 425 potentially offering some support in the short-term.

There is a low volume area under the POC which means the pivot will be the next target and below that is the value area low. See the table for those numbers. 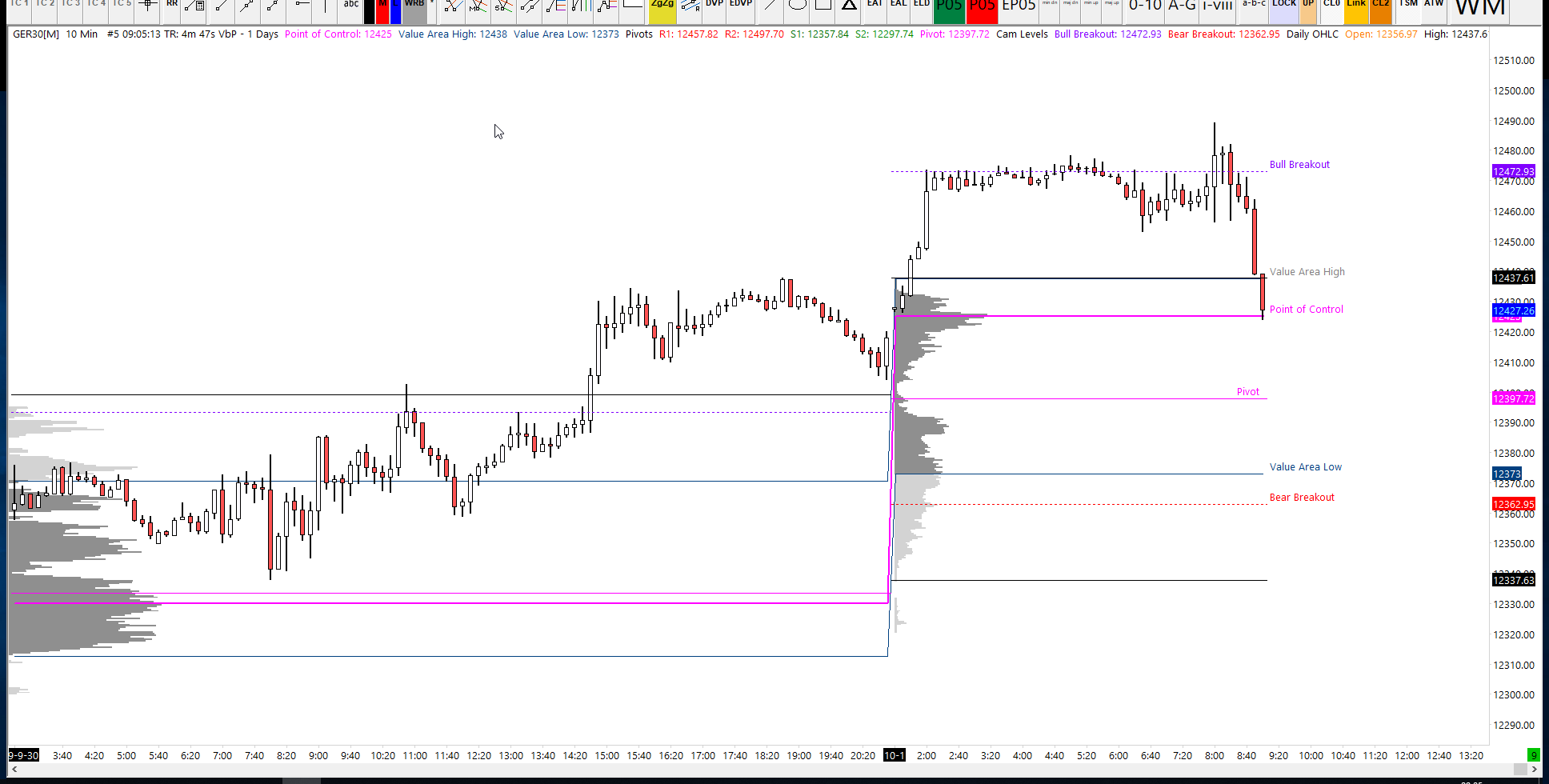 The upsloping low to low trend line support is under pressure and, whilst this line has been pierced before, it may offer some respite for any bearish impulse waves this morning. 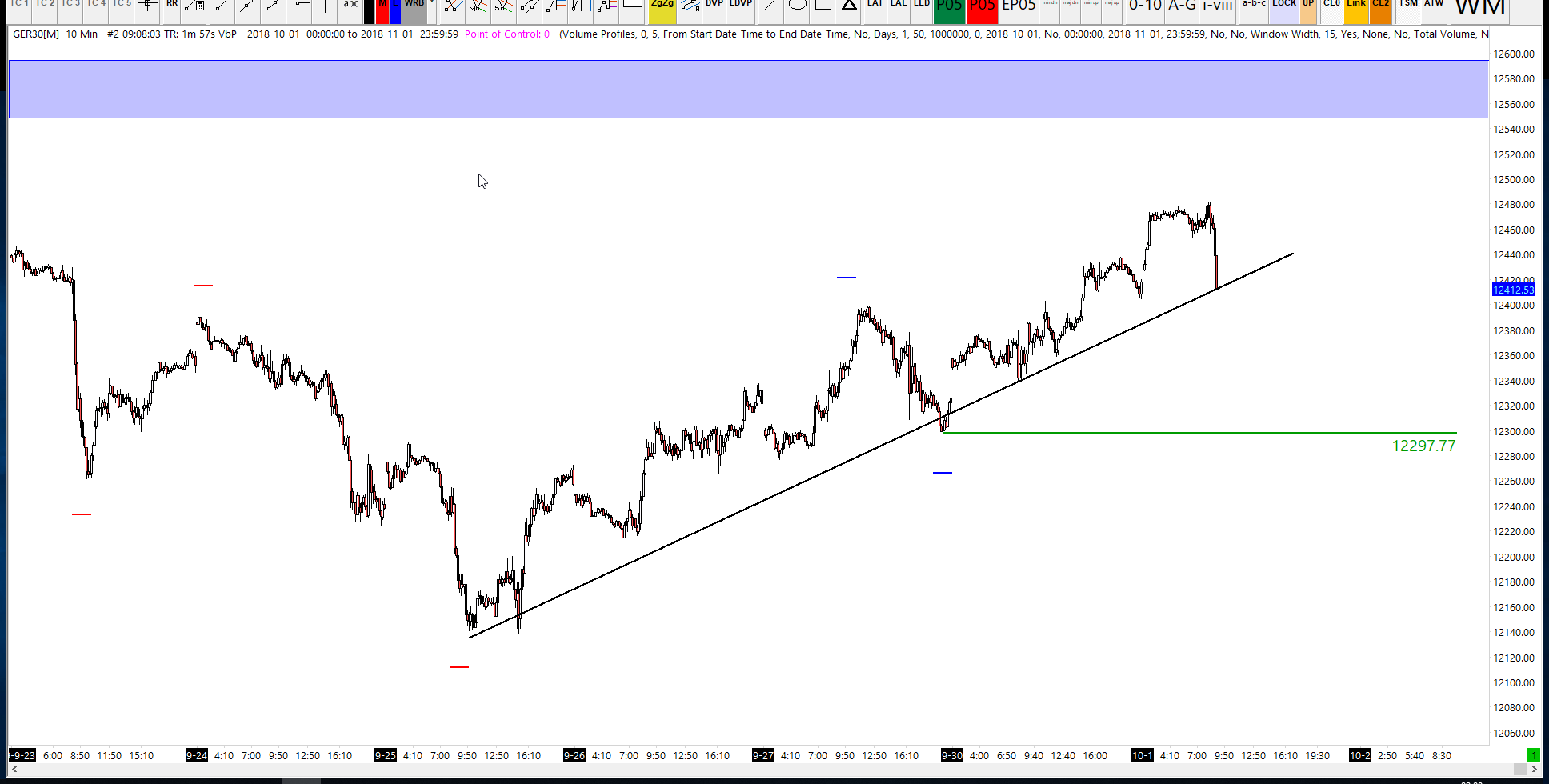 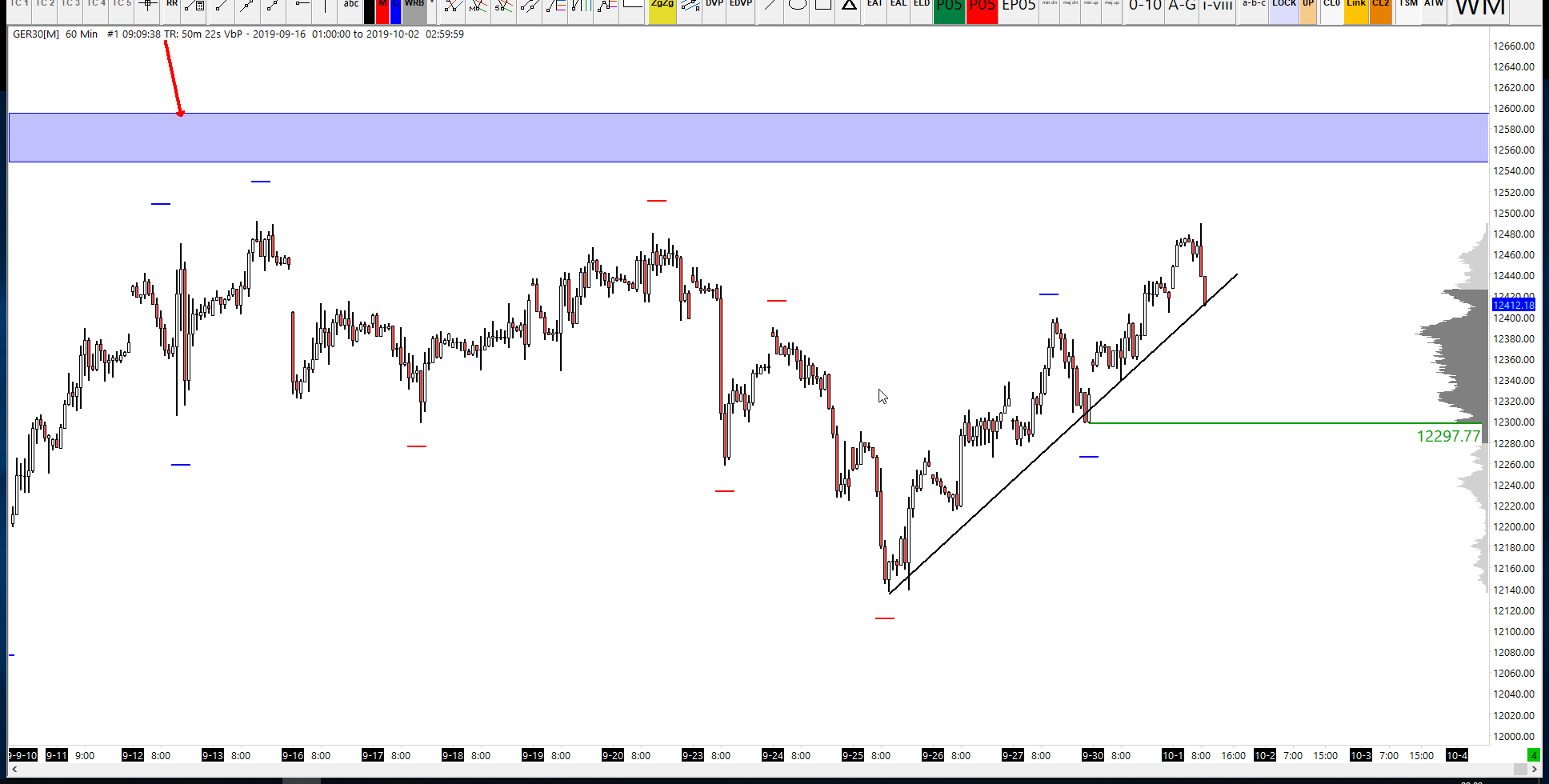 The trend-defining level right now is 12297 and the trend is technically bullish above this level.

Here is a look at the DAX trading strategy for this morning, notice the number of sell signals it produced just before the sell-off? The first one would have led to a stop loss, which is fine. However, any of the next three would have produced a decent gain at least three times higher than that loss. So remember to lose small and win big. It’s the key to solid bankroll management. 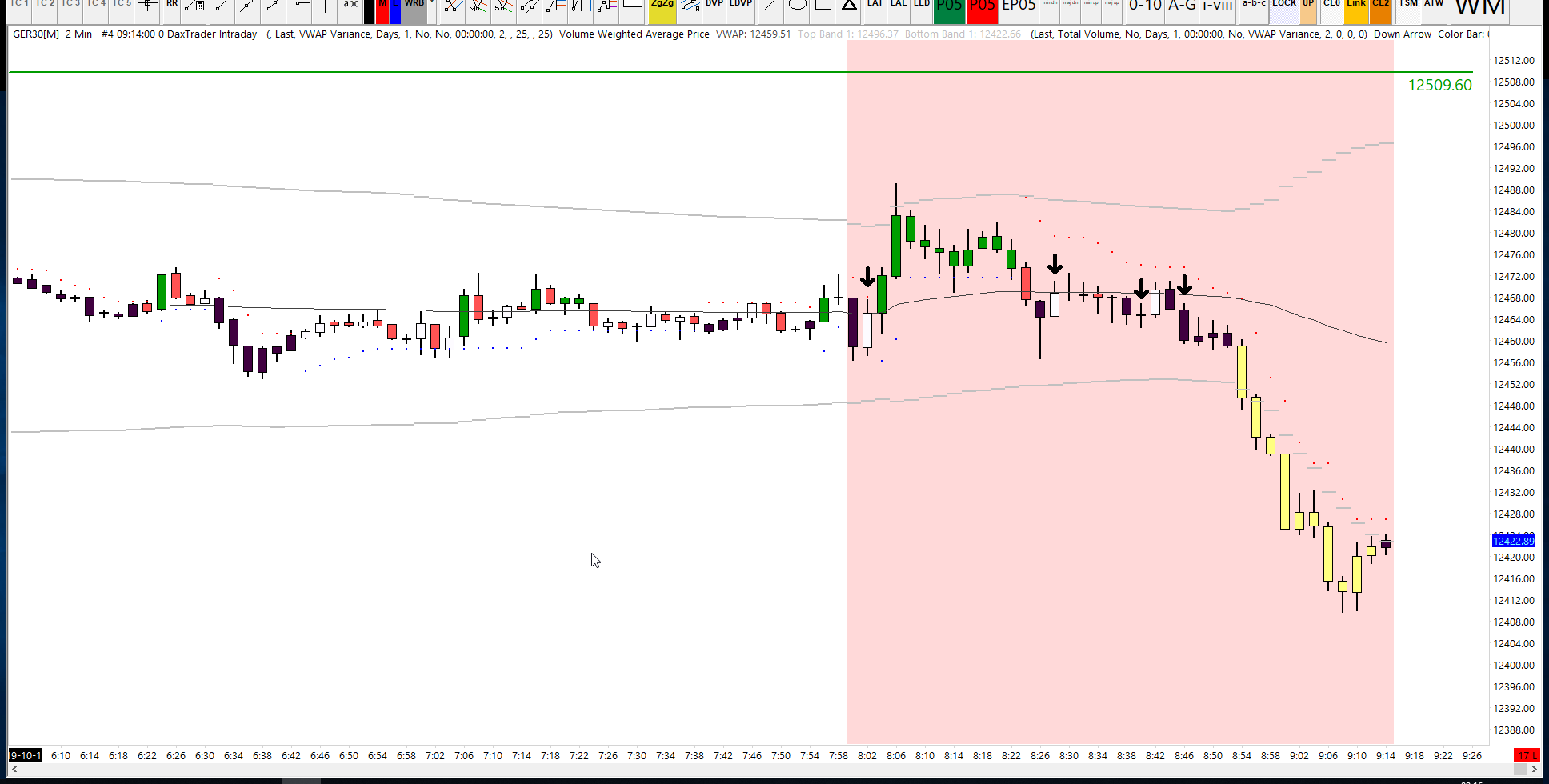 United Kingdom Prime Minister Boris Johnson said on Tuesday that he has not yet asked the European Union to prevent any further Brexit delay. “We haven’t made any such request,” he told BBC Radio 4’s Today program, commenting on reports he is set to request from the EU to force the UK to leave on October 31.

Johnson also denied media reports that the government is proposing to set up customs posts away from the Irish border in order to get the backstop removed from the Brexit agreement, saying he is “absolutely not” proposing such a solution. However, the UK prime minister claimed there would have to be customs checks somewhere after Britain leaves the European Union. “In the end, a sovereign, united country must have a single customs territory. When the UK withdraws from the EU that must be the state of affairs that we have,” he stressed.

The German PMI composite index came in at 41.7 in September, falling from August’s figure of 43.5, according to data from IHS Markit released on Tuesday The reading marked lows in the index last seen in June 2009.

Output fell at the fastest pace since July 2012 while new orders dropped even more, which resulted in fewer backlogs of work. Export sales were also falling, but the rate remained unchanged from August.

Phil Smith, principal economist at IHS Markit, said in a statement: “The severity of the job losses across manufacturing we are now seeing could start to weigh more heavily on consumer confidence, which up to this point has been relatively resilient. Interestingly, the weakness seen for a long time across the intermediate and investment goods sectors shows signs of spreading to consumer products, the decreases in output and new orders of which were key factors behind September’s lower headline number.”

The price action on the German DAX this morning is choppy with no real directional momentum. Last week we saw decent bearish momentum Monday through Wednesday and then decent bullish momentum for Thursday and Friday. But as we reach the end of the month, we see more of a balanced market.

The DAX can easily find the momentum that our trading strategy needs, so I am expecting for the algorithm to use a few bullets today, which would mean getting into a few trades that may not work out.  If that is the case, then that’s trading – stop losses are just the cost of doing business.

I have designed a new ‘trend filter’ for the strategy, which looks similar to the old one, but uses different calculations. The new trend filter is available for sierra charts users. 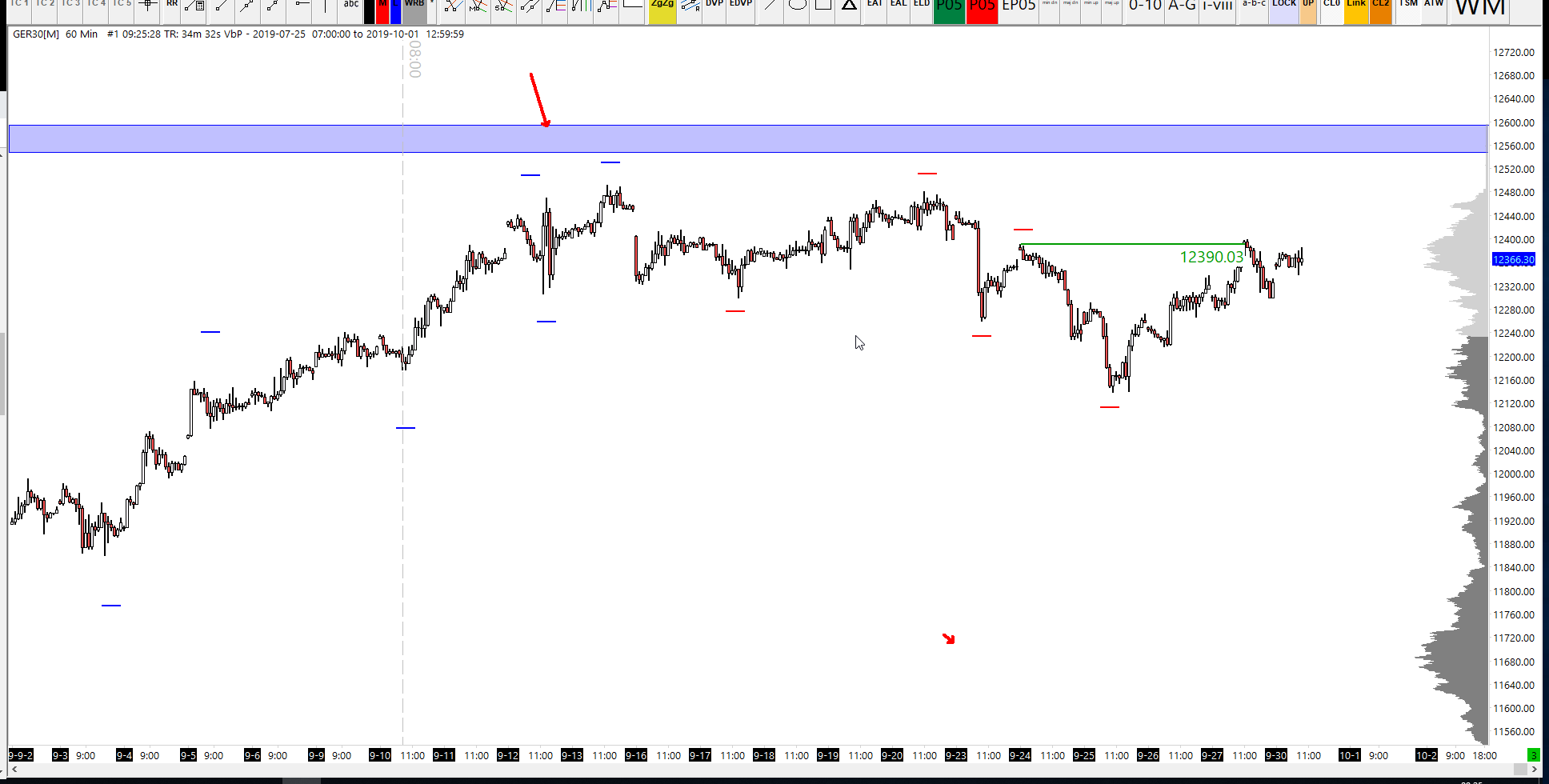 The major DAX trend is now, once again, unclear as the trend defining level of 390 was pierced on Friday. Considering it is the end of the month, we could easily see some last-minute profit-taking. DAX Technical Analysis 30th September 2019 (short term) 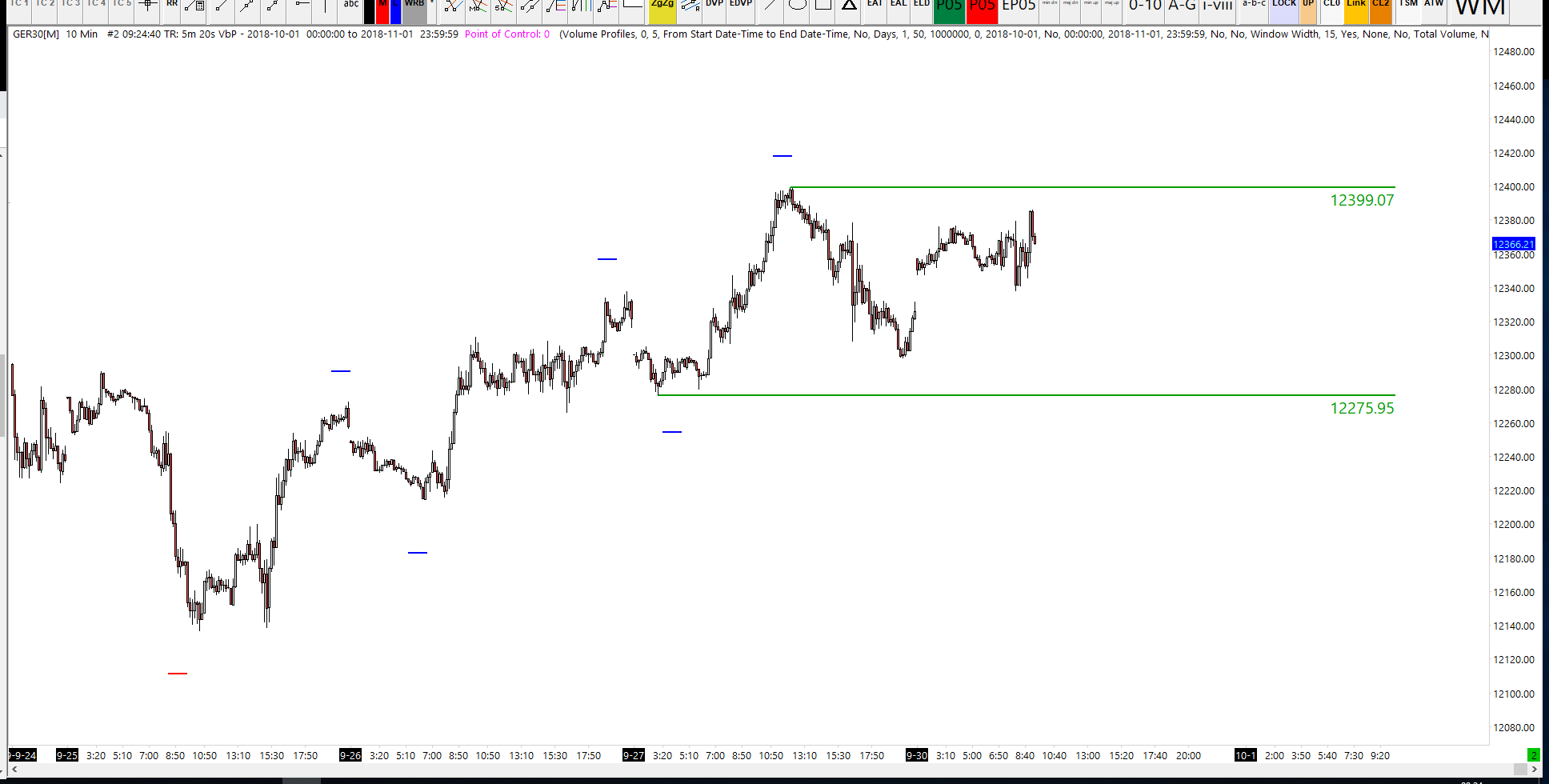 The short term trend is bullish with a consecutive series of higher highs and higher lows. The trend-defining level is 12275. The current high of 12399 needs to be broken first, in order to maintain the trend.

The unemployment rate in Germany remained unchanged at 5% in August with 10,000 new workers, according to a report released by the country’s Federal Employment Agency on Monday. Compared to the previous month, the number of persons in employment rose by 1,000 or by 9,000 after seasonal adjustment.

The number of unemployed German citizens in August decreased by 7,400 to 1.39 million, while adjusted for seasonal variations, the figure stood at 1.33 million compared to the previous month. On an annual basis, unemployment decreased by 88,000.

Watch out later for the harmonised index of consumer prices number.