Tuesday, Jan 19 and covering the rest of the week 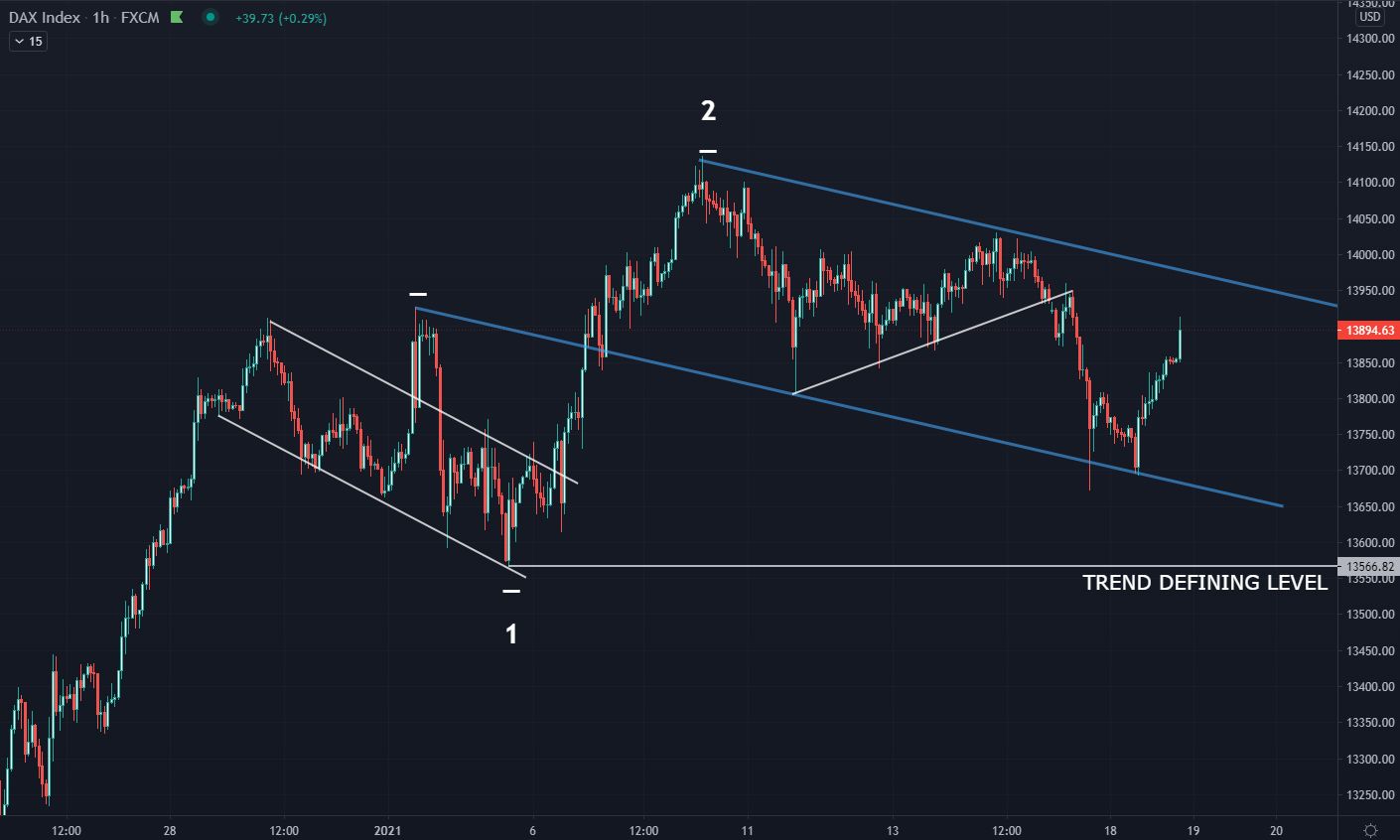 These posts are designed to keep a record of both the daily signals that I send and also the trading strategy executions using my DTI software on trading view, available to premium members.

The DAX remains bullish above 13566 and currently challenges the ascending channel resistance drawn on the featured imaged image above from the beginning of the week.

I had a pretty mediocre week for trading results this week, no major gains and no really interesting situations. It was a grind, some weeks are like that. Today was disappointing with 4 stop losses and only two small winners from 8pm closes at the end of the session. Overall, down for the day. Let’s draw a lin under it and move on. 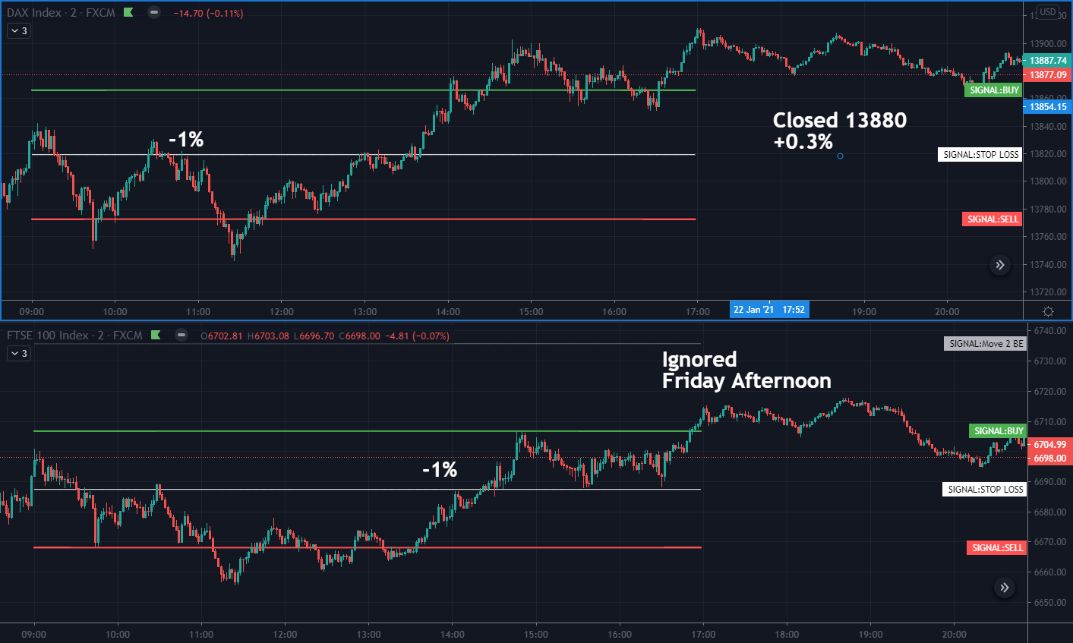 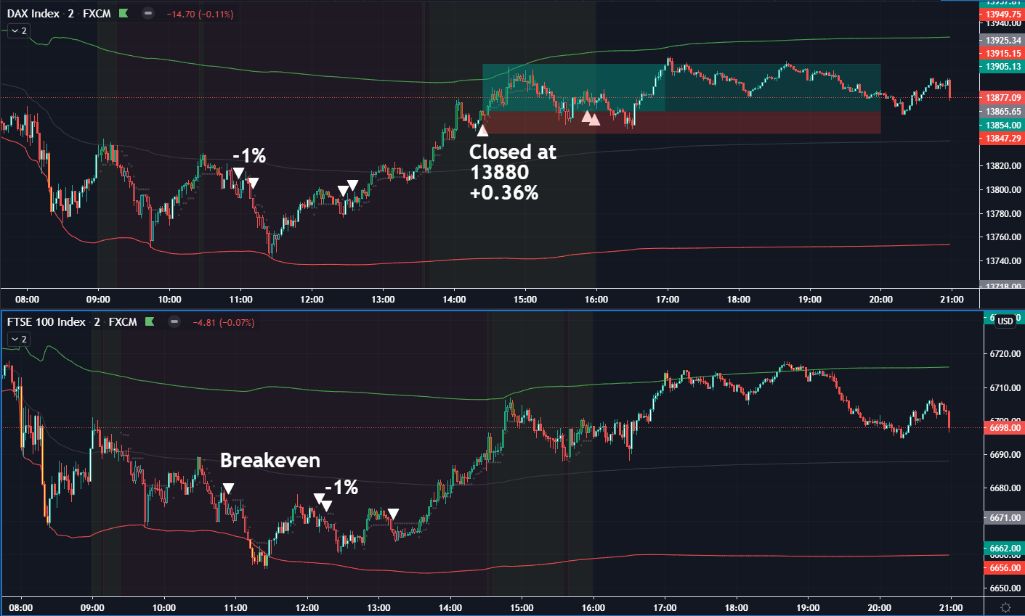 The German DAX threatened to reclaim its bullish momentum and reignite a rally yesterday by temporarily breaking above the descending channel, but instead falls back inside.

As for trading the DAX and FTSE, the daily signals saved my session. I had a short on both and they ran to the end of the session allowing me to close them both out for a small gain, nice and easy with no need to get too involved. This was in contrast to a difficult day on the DTI trading strategy. Remember that my limits on DTI are two FTSE stops and three DAX stops per day. Well, I had four stop losses today, two on FTSE (so I walked away from that) and two on DAX. But I entered a fifth and final trade which hit target and made up for the earlier stops! I’ll take that 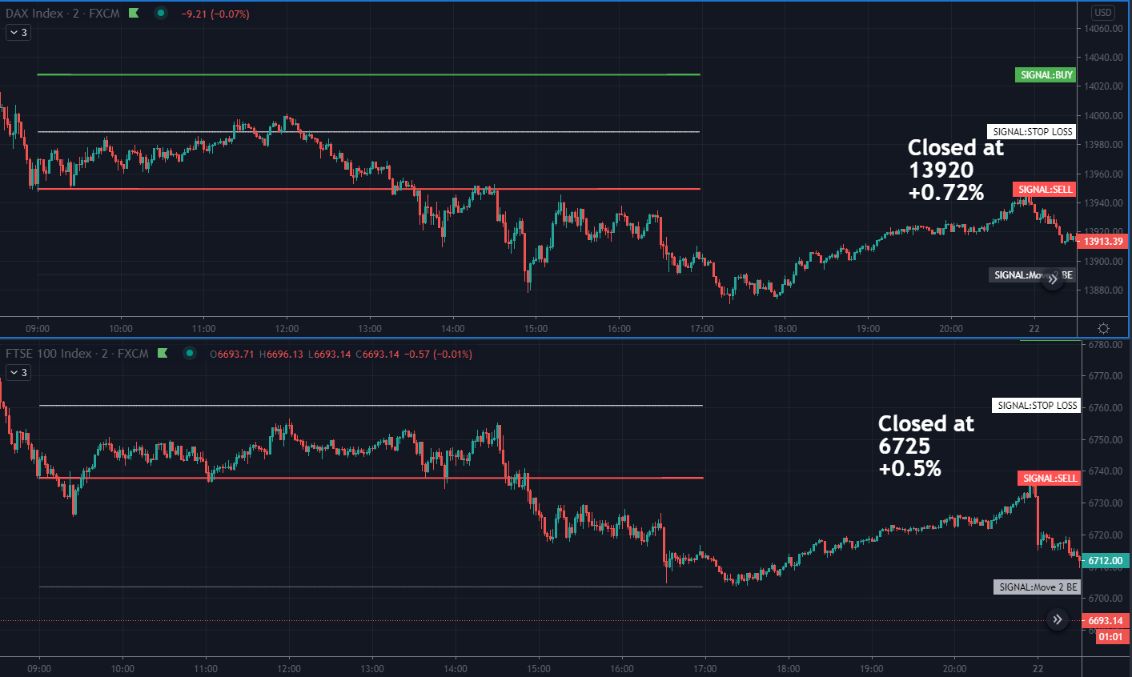 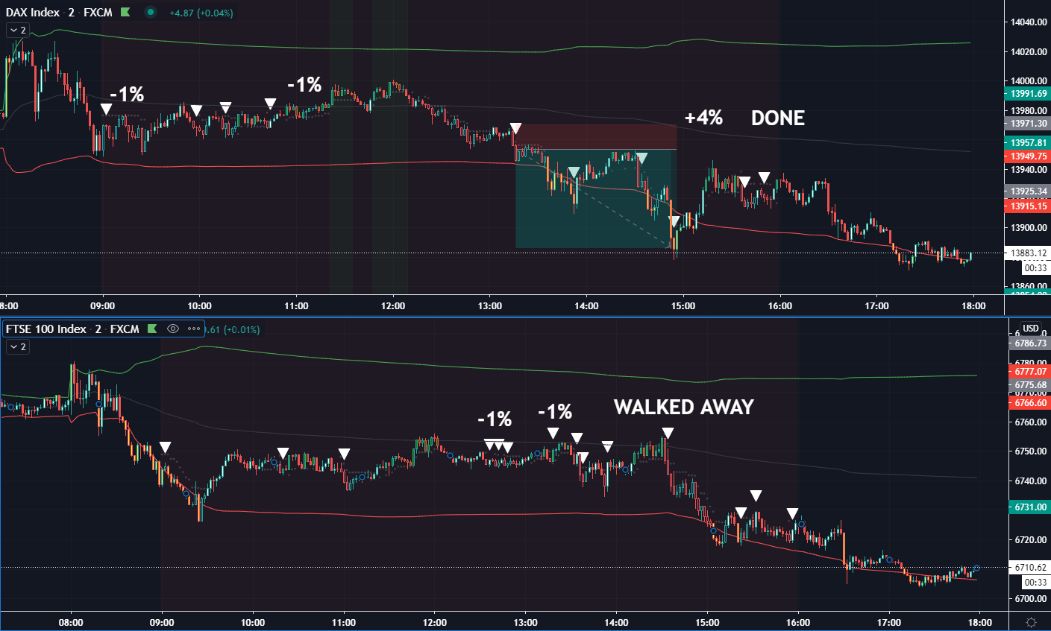 Quiet day in terms of trading, I took two longs from the daily trading signals which both run until the end of my session. So I closed them both at 8pm for a small gain. The DTI trading strategy was also quiet, with just two trades taken, one of which was a stop and the other closed at breakeven. 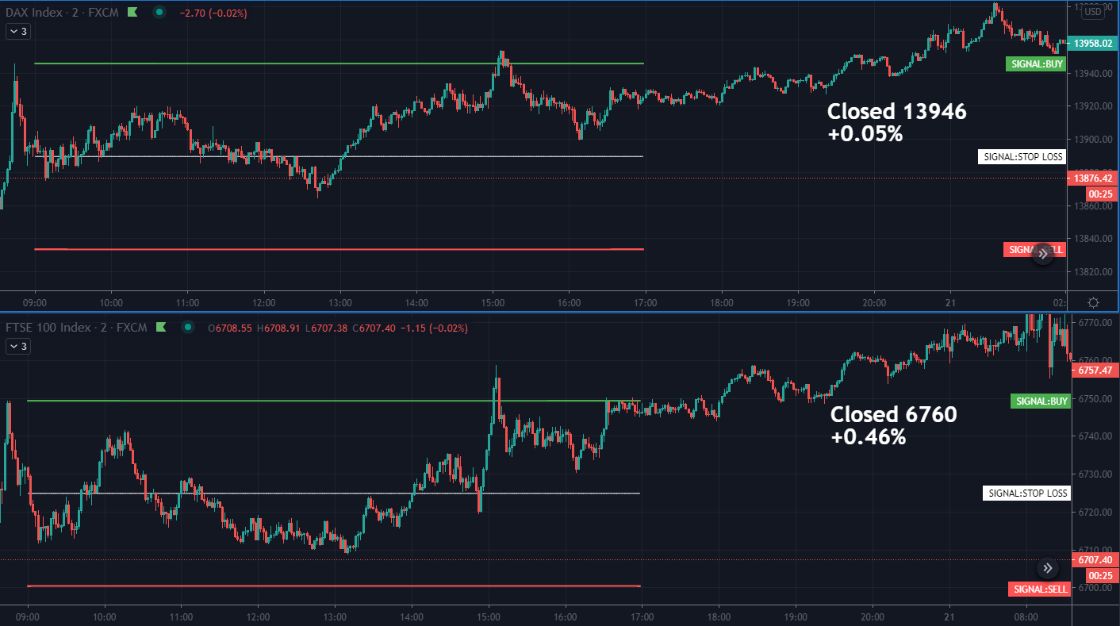 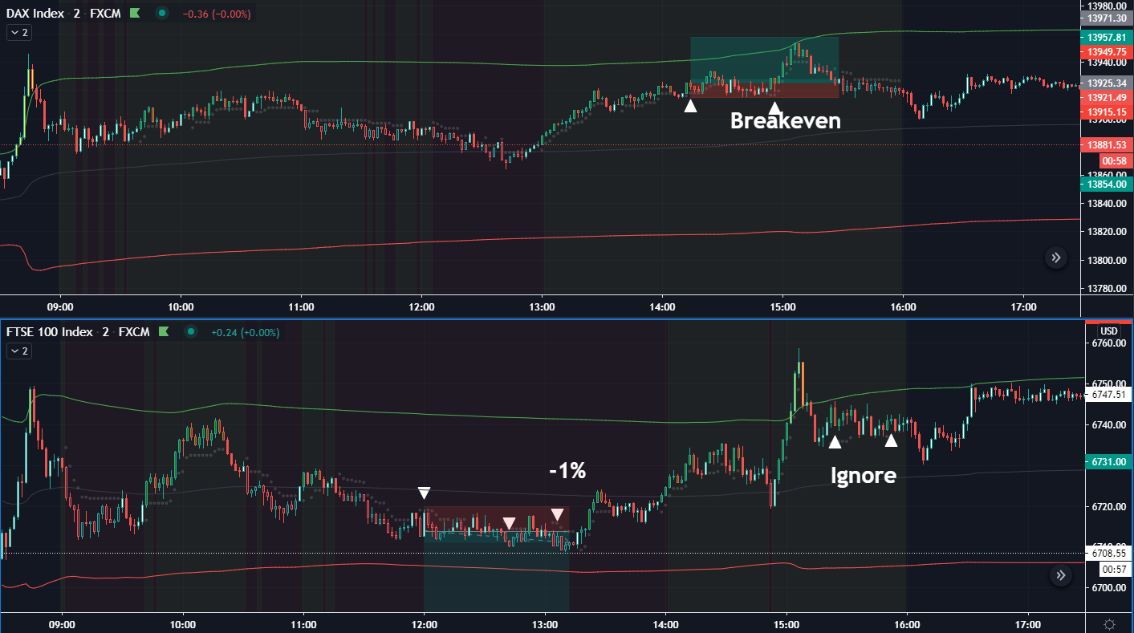 We are still contained within the descending channel on the DAX, and i’d like to see whether we continue to find resistance at the top and support at the bottom.

Yesterday I took one stop from the morning signals and one breakeven stop, so pretty slow day. The stop loss was from a DAX short which filled early and tagged the stop loss shortly before midday. The FTSE trade was stopped at breakeven.

As for the DTI trading strategy, there were a lot of situations where I ignored the signals because of the yellow vwap candles. I took two trades, both on DAX. Once was a stop loss and the other hit target. I was pretty lucky to take the second trade, because it happened quite quickly after the first once was stopped. 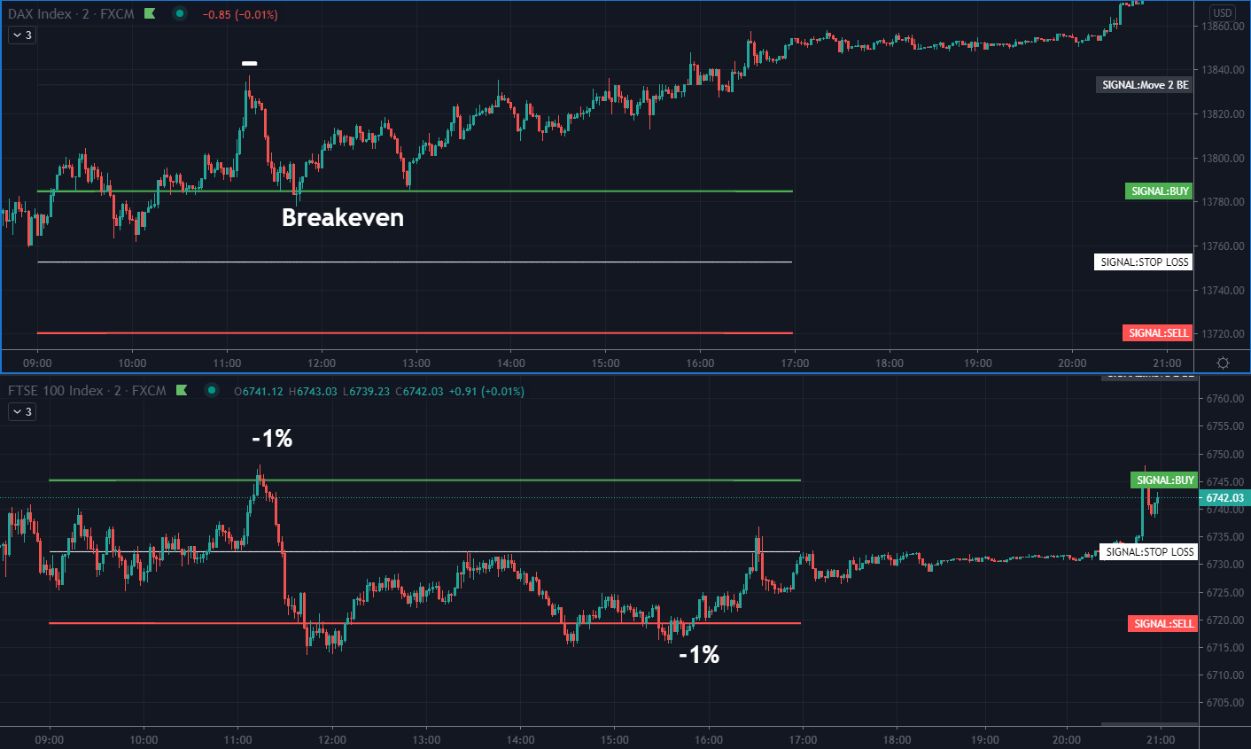 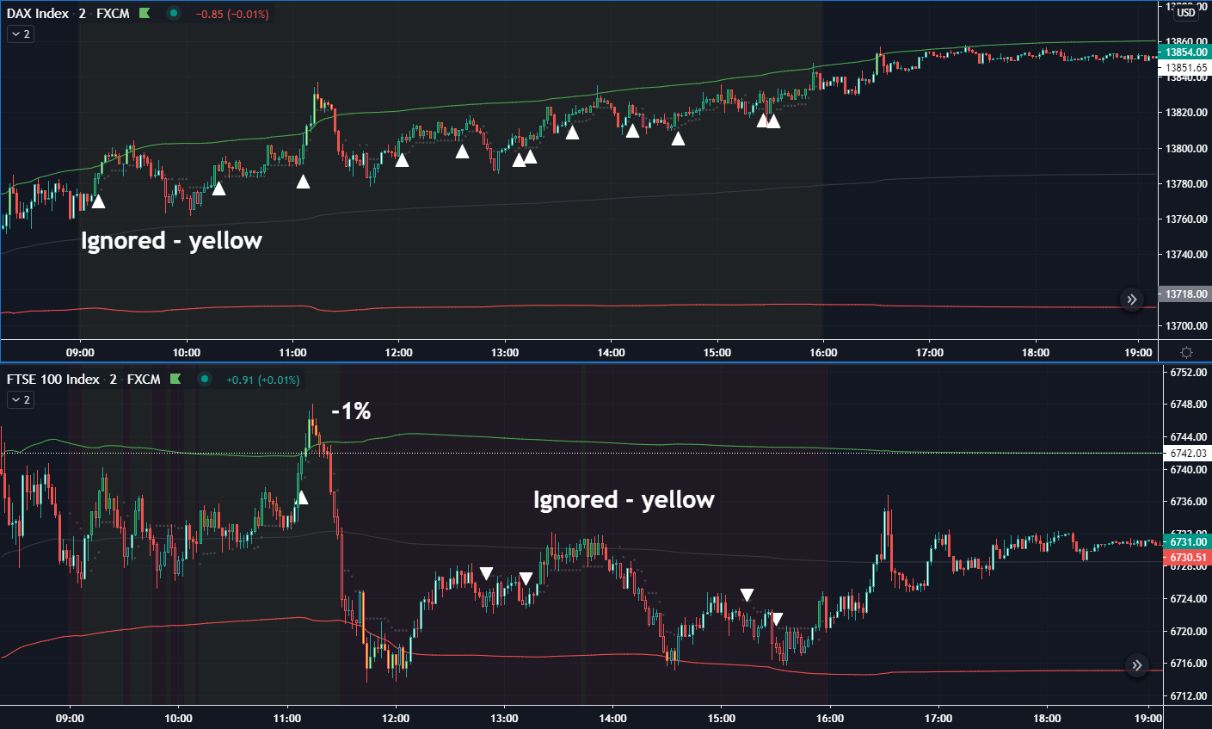 The long-term technical trend for the German DAX is still bullish above the 5th January low, ~13,566 but DAX in short-term descending channel. In order for the overall bull market to continue, we need to continue printing higher highs and higher lows. The trend defining level needs to hold and we need a new all-time high. No pressure.

As for trading, it was a three-stop day, one break-even and lots of ignored situations, thanks to the yellow candles.