We are currently trading inside the large value area you can see on the right of the chart below suggesting that price may be comfortable trading in a range around here. If it turns out that we are trading in a range, then the trading strategy will not be effective (as I found yesterday by taking three bullets on the chin). 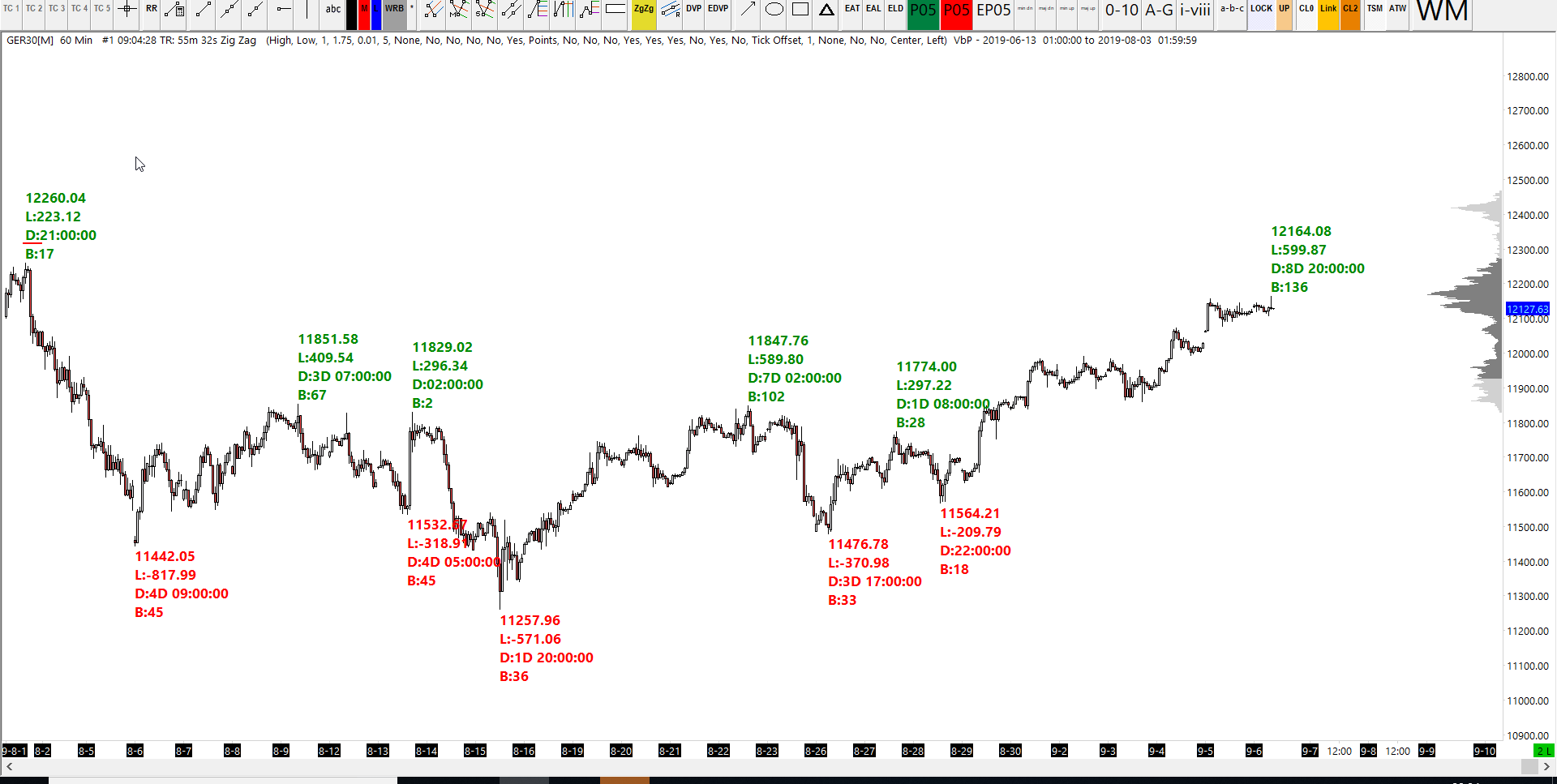 Just to repeat what I said previously: “To help you all with following our DAX trading strategy, I have published a series of tutorial videos all about using Sierra charts (the charting platform I use). The tutorials will help you download a free trial of the software, install everything and also get the program looking and working like mine.

The short-term trend does tell a bullish story with a series of higher highs and higher lows, with the trend-defining level at 11853. The trend remains bullish above that level. However, just be aware that the price action is beginning to compress into a wedge formation. 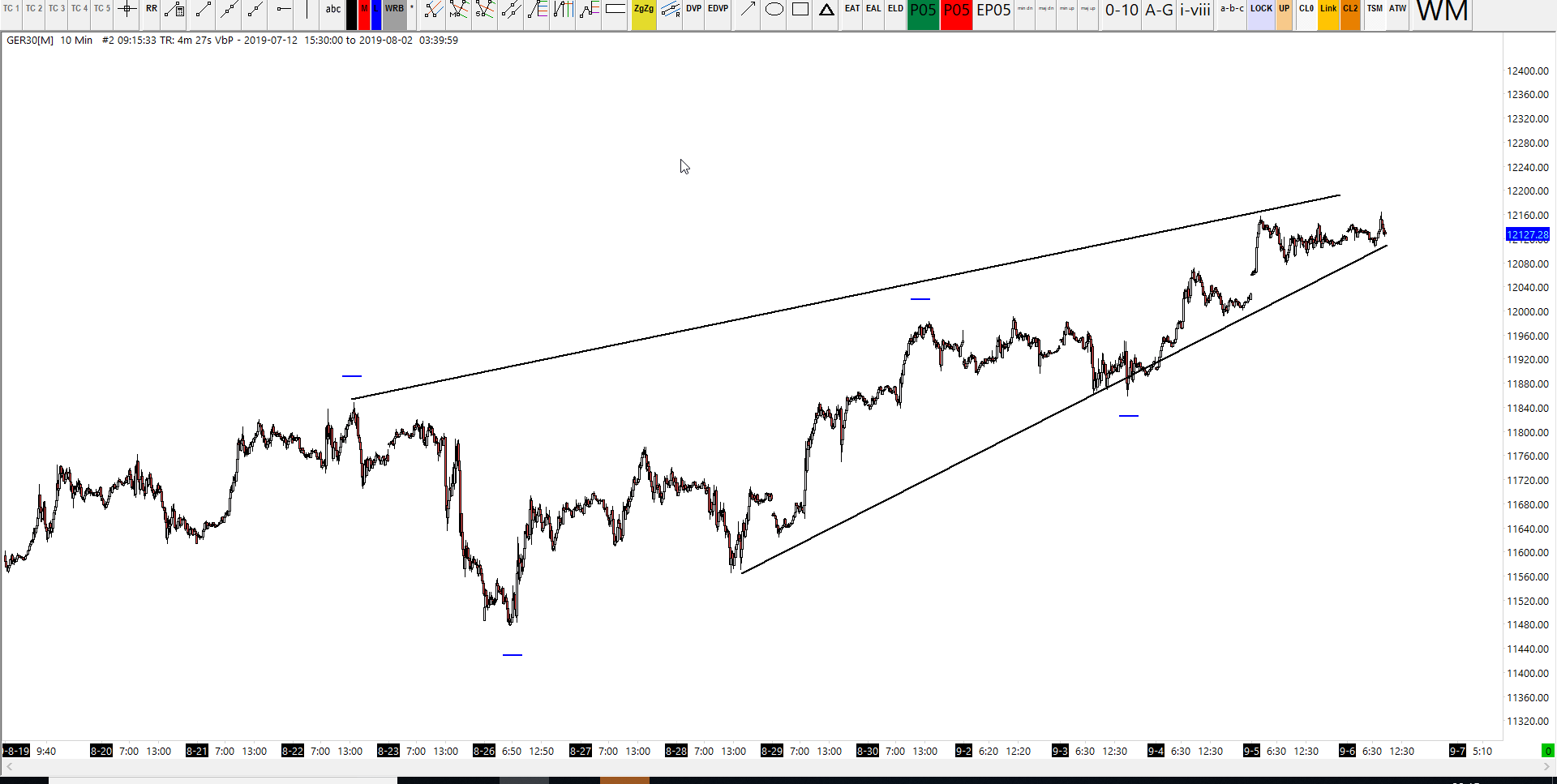 See The Tutorials
European stocks started on a mixed note on the last day of the week as the Brexit saga continued to take its toll on the markets. United Kingdom Prime Minister Boris Johnson said on Thursday that he will do everything he can to ensure that Britain leaves the European Union on October 31, adding that he would rather be “dead in a ditch” than ask the bloc for another “totally pointless” Brexit delay. However, subsequent reports indicated that the Labour Party would attempt to delay the UK’s general election until November over worries that its leader Jeremy Corbyn would lose if it took place any sooner.

In other news, investors awaited economic data for the UK and EU due for release later in the day. 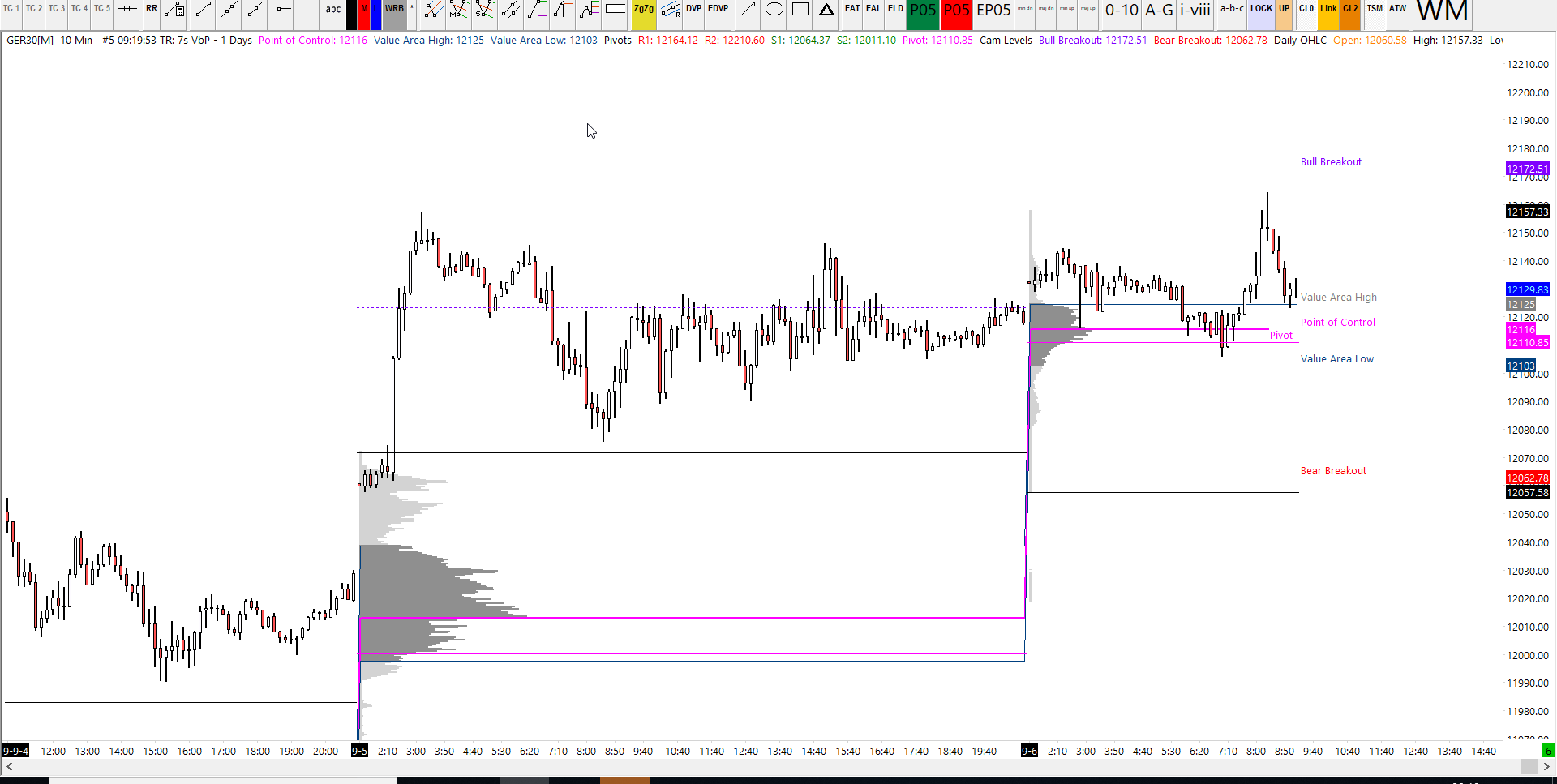 WORKING OUT OF OFFICE AGAIN TODAY – Spend some time looking through the new look of the website and see what you think. Feedback welcome.

WORKING OUT OF OFFICE TODAY – Check back for more tomorrow

There was an opportunity to short this morning from the DAX trading strategy which could have gained a few points. The market is bearish (red background), the arrow indicates that the candles also turned bearish, but the algorithm did not take the trade as there was a yellow candle. Remember that the yellow means price is stretched. In this case it means that price is below the deviation low (two standard deviations below VWAP). A more aggressive trader could take that position. 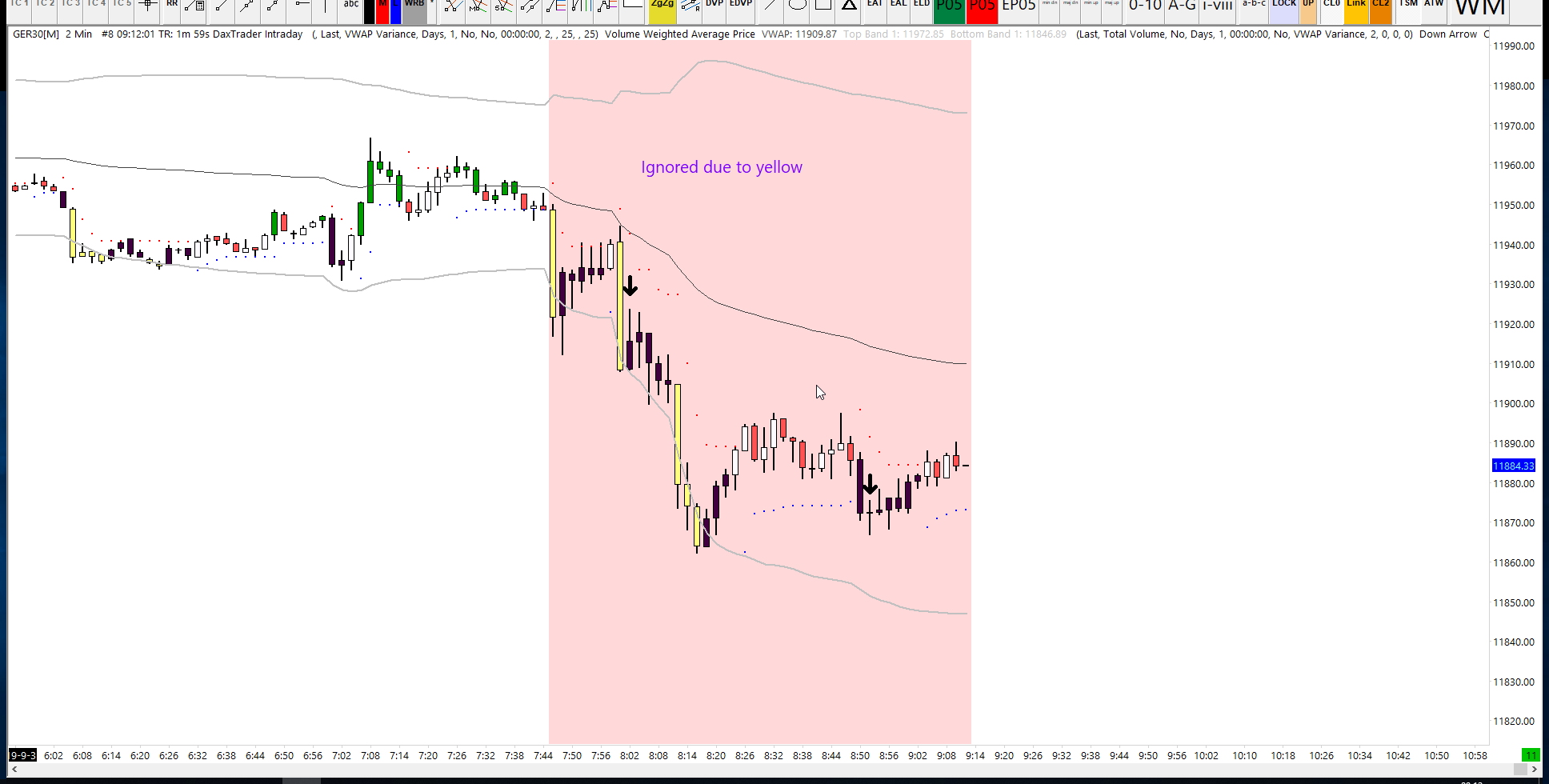 Just to repeat what I said yesterday: “To help you all with following our DAX trading strategy, I have published a series of tutorial videos all about using Sierra charts (the charting platform I use). The tutorials will help you download a free trial of the software, install everything and also get the program looking and working like mine. 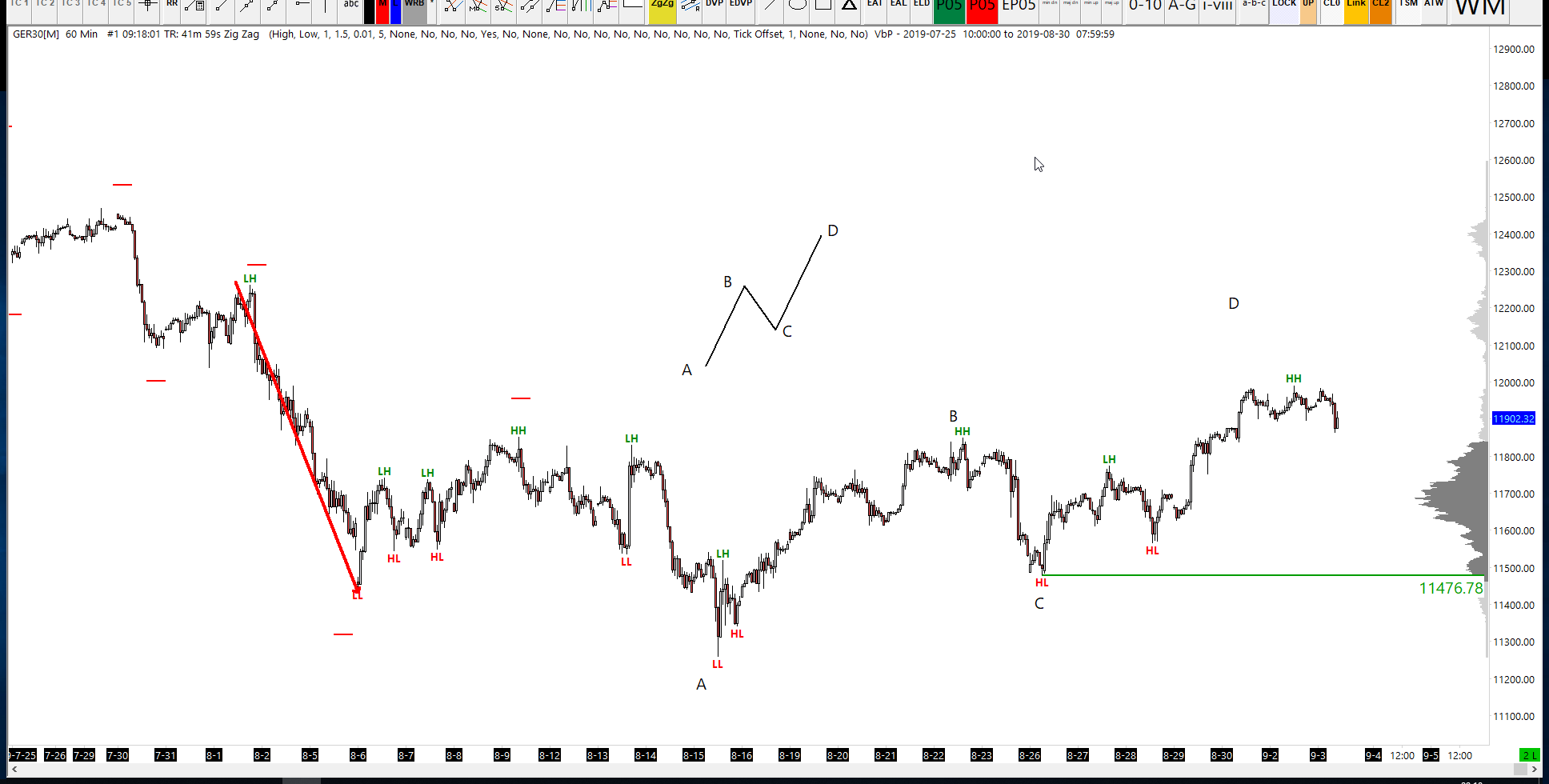 The major DAX trend is now Bullish above 11476, but struggling to get through the 12,000 barrier. 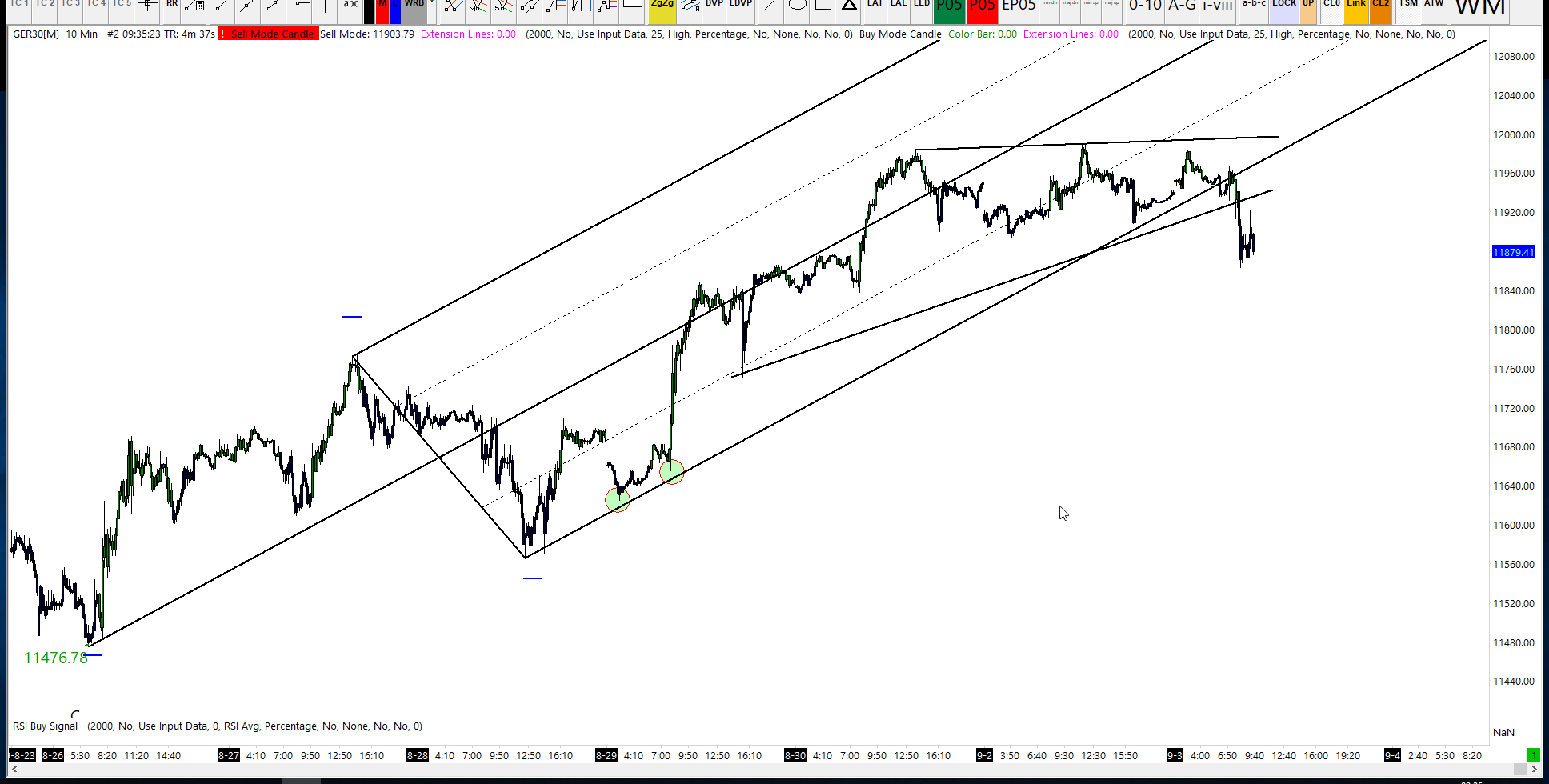 The bullish fork can soon be removed as the price has broken below the lower median line parallel. It also broke through the ascending triangle.

Get Trading Signals | Pay Monthly
Europe opened mixed on Tuesday as trade talks between China and the United States seemed less likely to take place in September after both countries imposed new tariffs. Meanwhile, the pound fell to October 2016 lows before the bell as chances of a general election in the United Kingdom before Brexit increased.

If a general election takes place in the United Kingdom before the country’s departure from the European Union, the Brexit Party will not run against the Conservatives, Brexit Party Leader Nigel Farage said on Tuesday. The Brexit Party’s support would be expected to increase in the next election, since Farage’s party won a large portion of the UK vote in European elections this year.

Reports said UK Prime Minister Boris Johnson will ask MPs to vote on a general election proposal if he sees that there is a chance Parliament will pass a no-deal Brexit bill prepared by Labour and a number of rebel Tory MPs. Johnson is expected to meet the group of Tories that opposes a no-deal Brexit later in the day as reports suggested the government would be prepared to withdraw the whip from them, so they couldn’t be Conservative candidates in the next election. 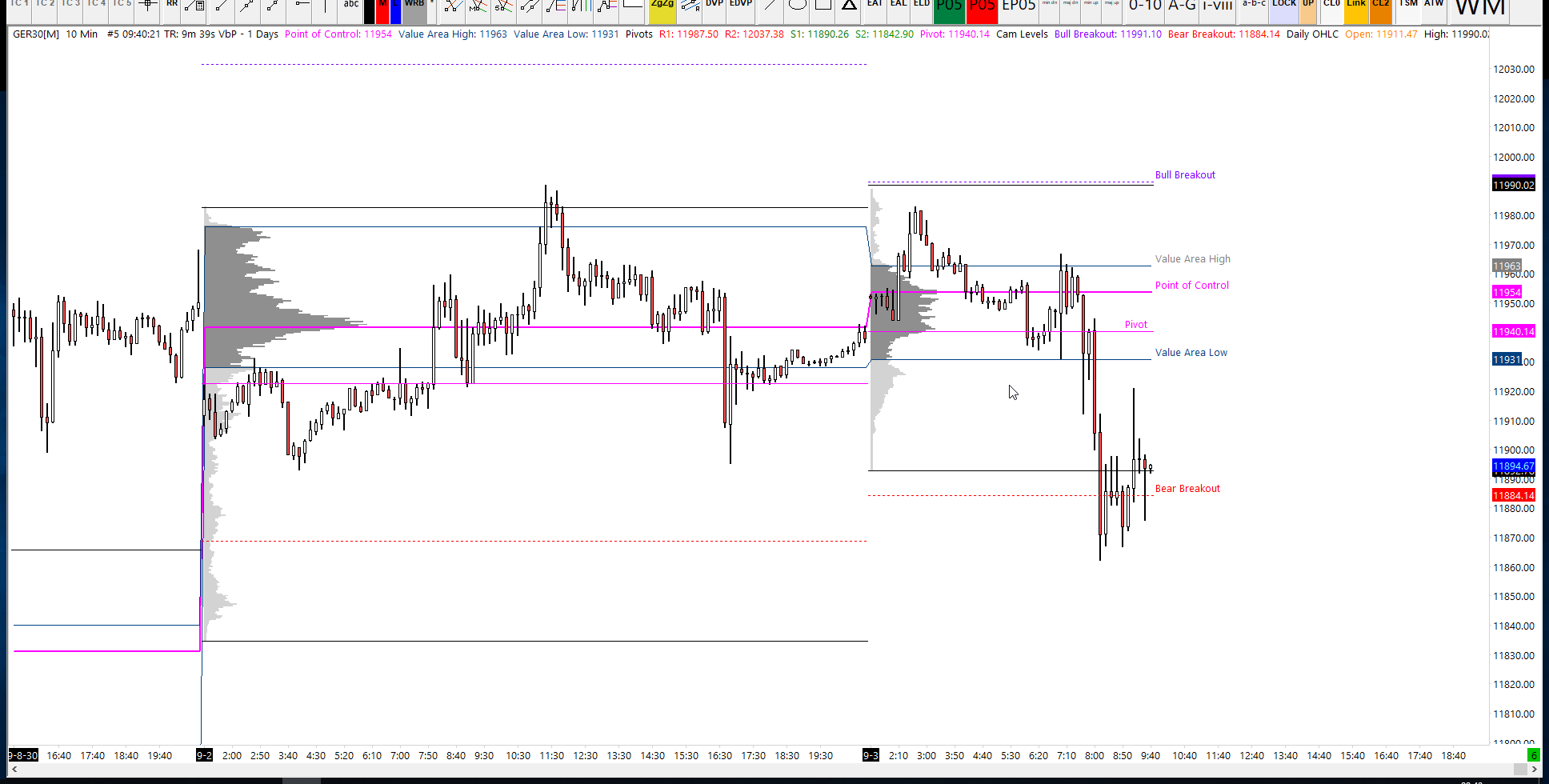 This is a bit of a ‘flip flop’ day. The market is not really moving in any direction, it is simple ‘balancing’ under the 12k. Make sure to study up on balance points, balance areas, value areas and volume profiles from the member’s section (if you are on the trader development package). 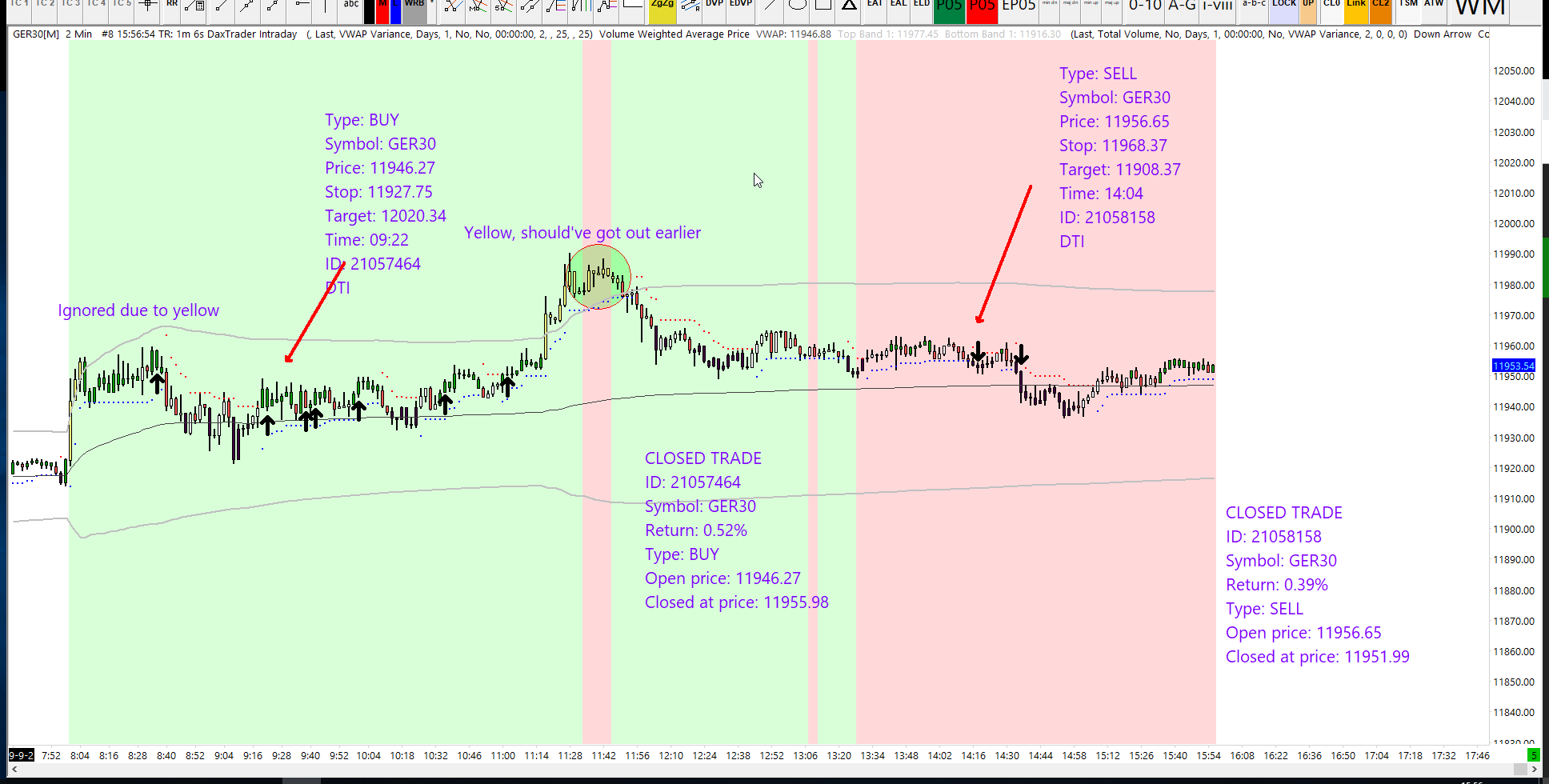 The DAX trading strategy algo took a long earlier (which was sent into the signal channel) based on the second set of buy signals visible on the image below.

The exit signal was the selection of yellow candles, but the trade was held open. 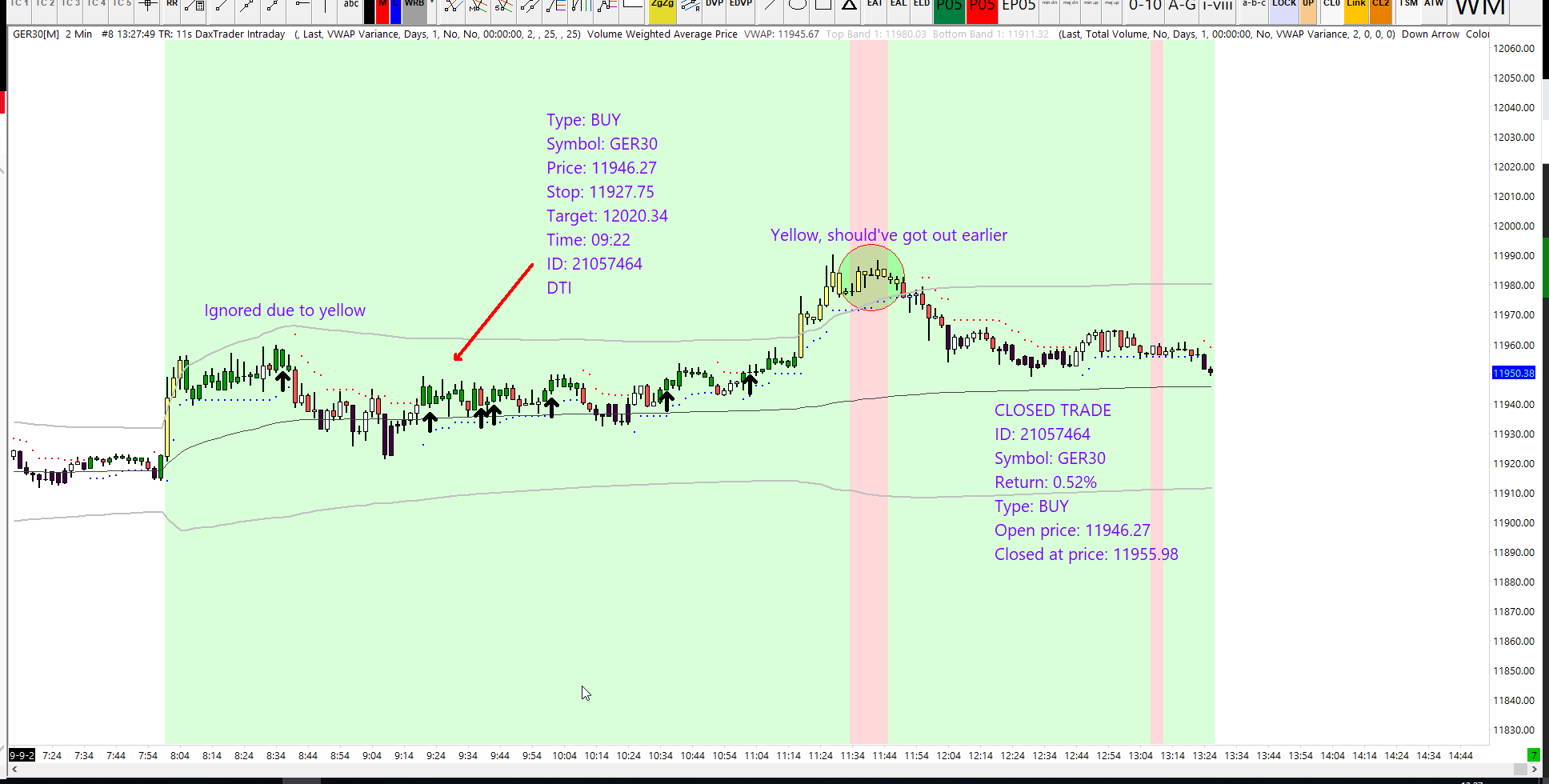 Technically the market is bullish above 11 476 and according to August’s composite volume profile, the next area of value looks to be between 12 100 and 12 200.

The market appears Bullish right now, and many traders will jumping into longs. We just need to be aware that the gap has closed and price may want to retrace back towards the 11915/11920 ignition before moving higher.

To help you all with following our DAX trading strategy, I have published a series of tutorial videos all about using Sierra charts (the charting platform I use). The tutorials will help you download a free trial of the software, install everything and also get the program looking and working like mine. 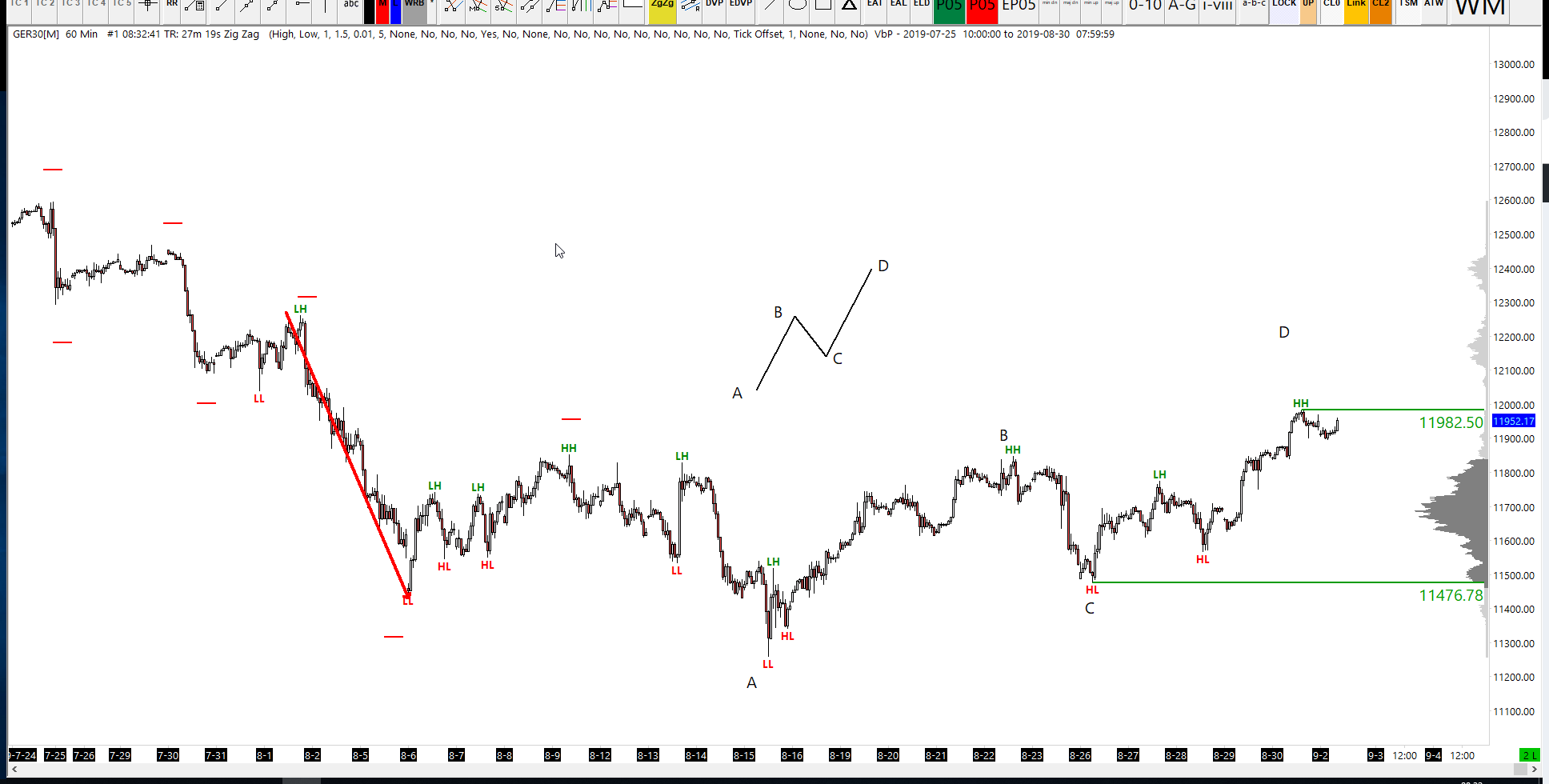 The major DAX trend is now Bullish above 11476. 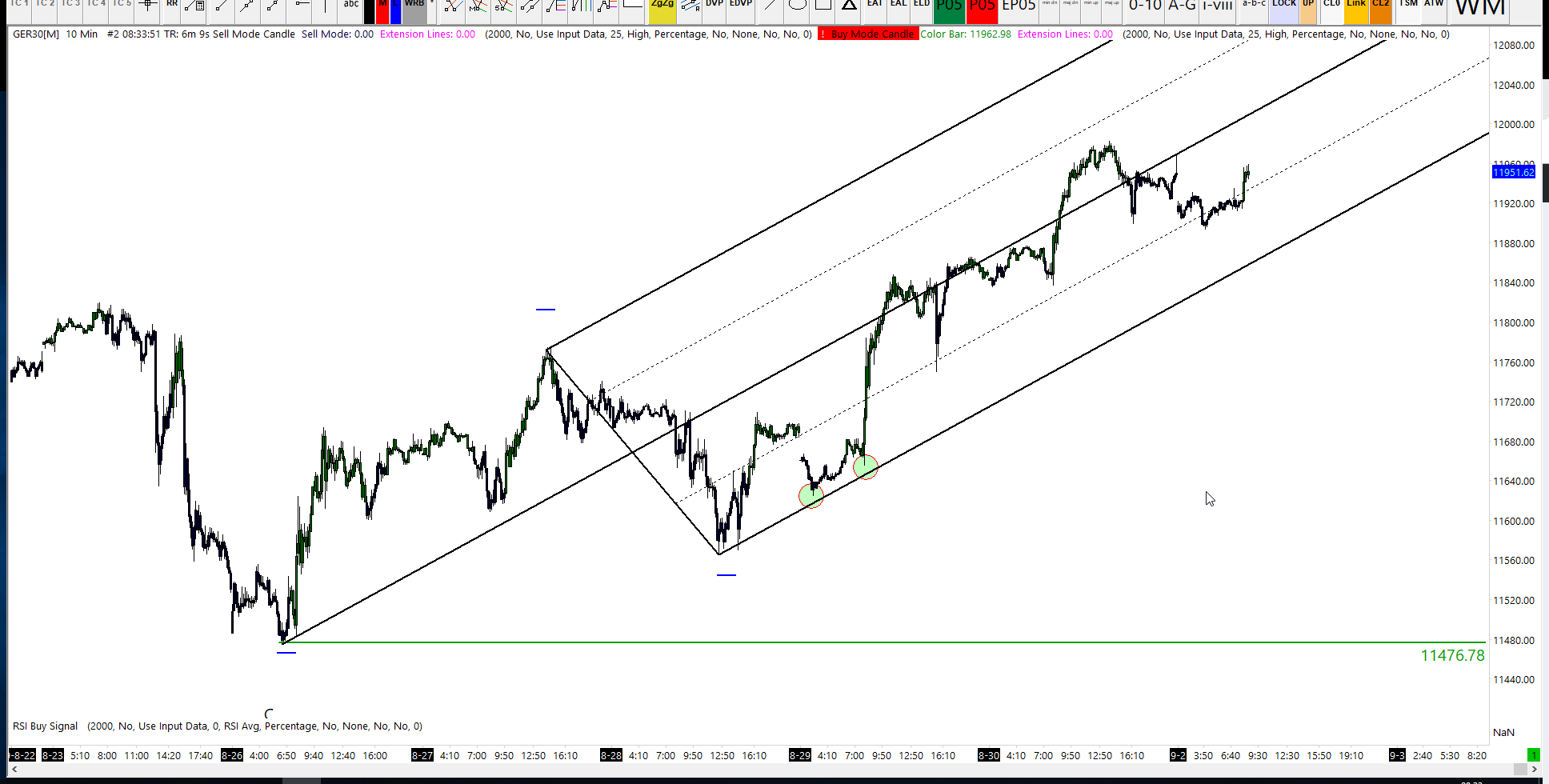 This DAX pitchfork on the 10-minute chart clearly shows the minor swings in play.

Get Trading Signals | Pay Monthly
European markets started Monday mostly higher as MPs in the United Kingdom revealed they want to introduce legislation to stop a no-deal Brexit. According to MP Nick Boles, lawmakers plan to ask Prime Minister Boris Johnson to ask the bloc for a short Brexit deadline extension, in case Parliament doesn’t vote for a no-deal Brexit, or it fails to pass a new Brexit deal. Earlier, however, reports emerged that the dispute over a no-deal Brexit outcome may lead the country to a general election as Johnson threatened to withdraw the whip from dozens of Conservative MPs if they stand behind plans to stop a disorderly withdrawal.

The activity in the German manufacturing sector remained virtually unchanged in August compared to the previous month and firmly in contraction territory, a release by IHS Markit showed on Monday.

The IHS Markit/BME Germany Manufacturing Purchasing Managers Index (PMI) stood at 43.5 in August, close to July’s seven-year low figure, marking a rather modest increase of 0.01 compared to the month before.

The slump in Germany’s manufacturing sector goes on and, with no light at the end of the tunnel just yet, the number of goods producers cutting staff numbers continues to rise, boding ill for domestic demand, IHS Markit Principal Economist Phil Smith said commenting on the report. 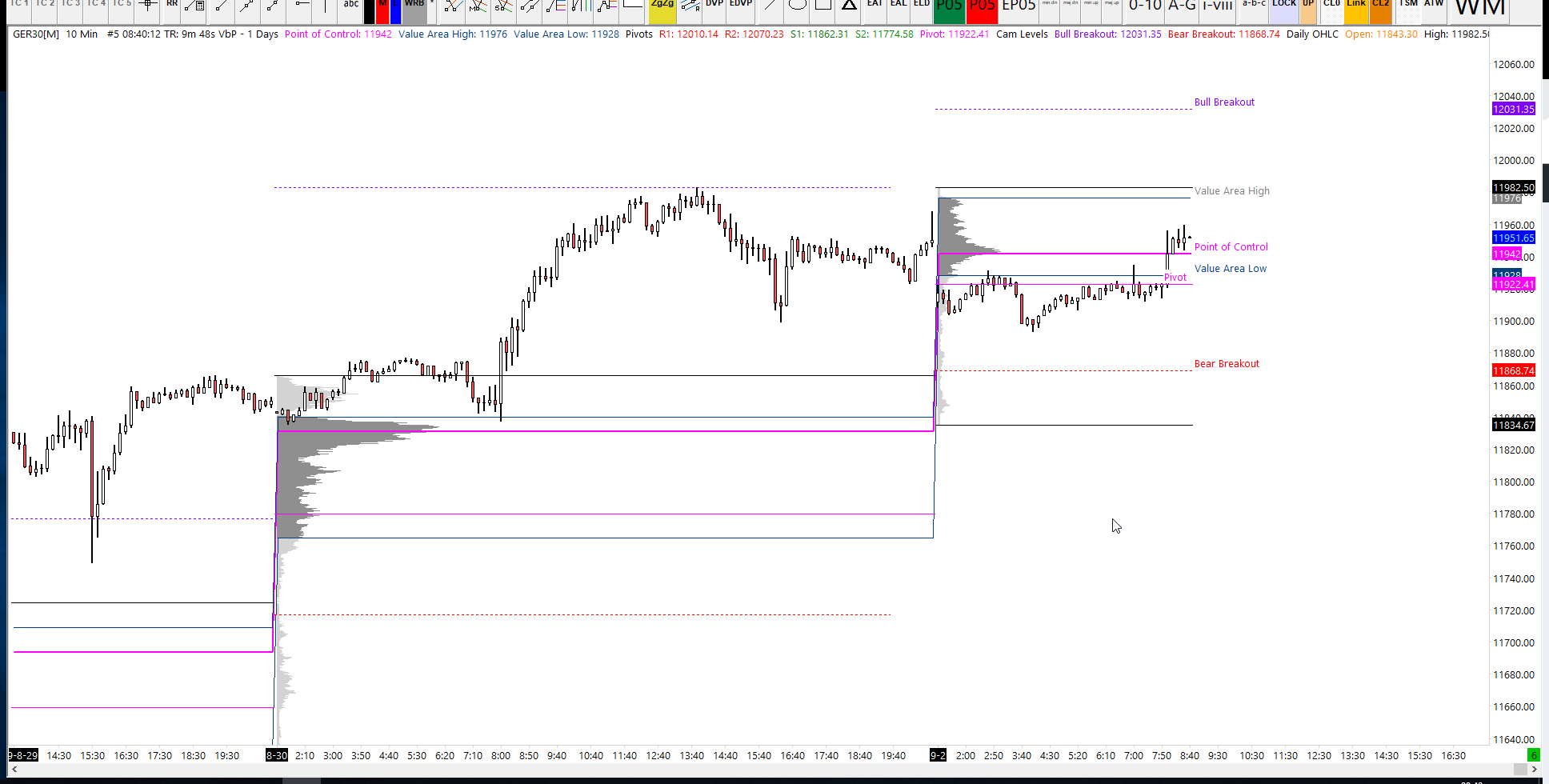 Is DAX Heading For ACR Target?